Sun erupted slow-moving Coronal Mass Ejection (CME) on February 19, 2013. Goddard Space Flight Center reported that the bulk of the plasma cloud was directed to the north of Earth. Still, we can expect a glancing blow around February 22, 2013. Minor to moderate geomagnetic disturbances will be possible at very high latitudes backed by aurora displays. 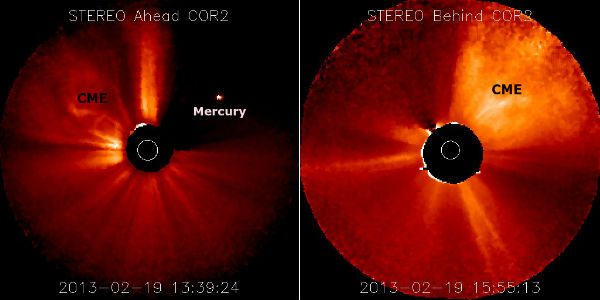 Bright and slow-moving CME visible at STEREO Ahead and Behind imagery on February 19, 2013 (Credit: STEREO/captures by The Watchers)

New Sunspot 1678 produced only B-class and C-class solar flares by now, however, this fast growing region continues to form to the southeast of Active Region 1671 and may produce an isolated M-Class, even X-class  event, within the next 24-48 hours depending on development. AR 1678 developed beta magnetic complexity with mixed fields.

Active Region 1678 is currently larger than three Earths. This video bellow by SDO shows the formation of this region from February 17 through part of February 19, 2013.

The largest solar event in the past 24 hours was a C2.2 event observed from Region 1678. NOAA numbered 7 sunspot regions on the disk and SIDC/Catania counted 9 active regions. All  regions are currently stable. 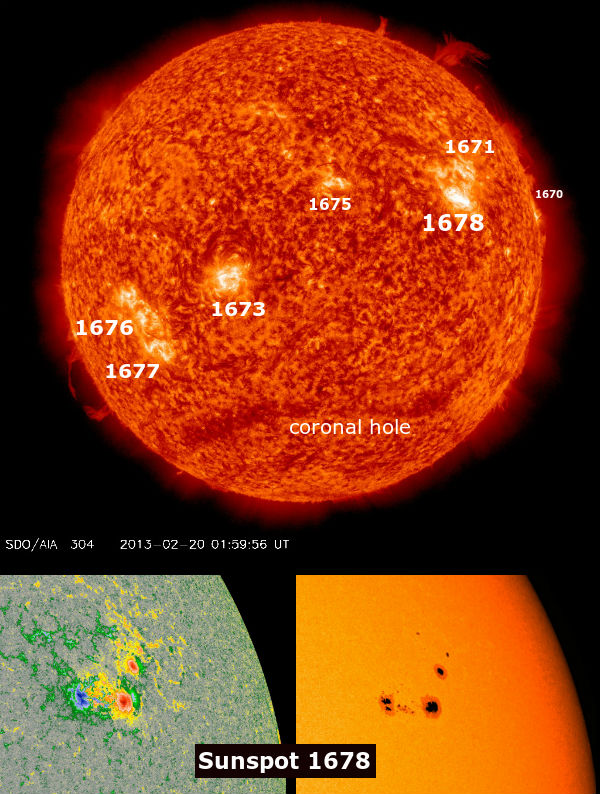 Active region and large sinuous coronal hole marked on AIA 304 and close up of sunspots 1678/1671 captured on HMI Intensitygrams (Courtesy of NASA/SDO and the AIA, EVE, and HMI science teams/captures by The Watchers)