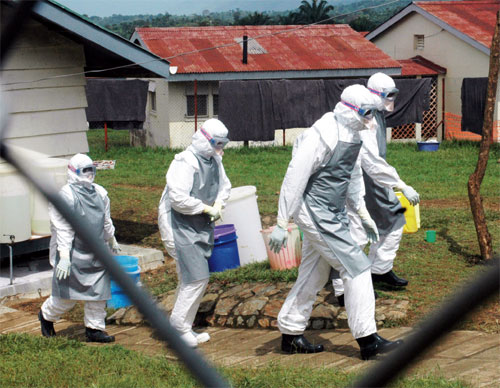 The Ugandan Government has created an emergency task force to deal with an outbreak of the Ebola virus. Dozens of terrified patients have fled hospitals afraid of contracting the disease, making quarantine near-impossible.

The onset of the virus outbreak – the third in the last 12 years – has caused the deaths of at least 14 people in western Uganda.

Depending on the strain the Ebola fatality rate can be up to 90 per cent.

The first cases came from a single village, where at first the sudden deaths were explained as witchcraft.  Health officials say this slowed the identification of the virus increasing the number infected.

As soon as news broke of the onset of one of the deadliest virus known to man, patients at the Kagadi hospital where some of the ill have died, fled in terror of being infected.

Ugandan Health Secretary Stephen Bayaruhanga said many sick people who may have been infected with the virus refused to get tested at hospitals, fearing they may contract the disease there if they don’t already have it. In Kampala, where at least two of the cases have been treated, seven doctors and 13 health workers are under quarantine.

Teams in Uganda are trying to track down anyone who came into contact with patients infected with the Ebola virus. “This is very, very important, to trace every contact and to watch them for an incubation period of 21 days,” World Health Organization spokesman Gregory Hartl said.

Ugandan President Yoweri Museveni spoke on state and private television Sunday urging his countrymen to be cautious. “I therefore appeal to you to be vigilant. Avoid shaking of hands; do not take on burying somebody that has died from symptoms which look like Ebola. Instead, call the health workers to be the ones to do it. And avoid promiscuity because these sicknesses can also go through sex,” he said.

It is a highly infectious, often fatal agent spread through direct contact with bodily fluids. Symptoms can include fever, vomiting, diarrhea, abdominal pain, headache, a measles-like rash, red eyes and, at times, bleeding from body openings.

Uganda has seen three major Ebola outbreaks over the past 12 years. The deadliest was in 2000 when 425 people were infected. More than half of them died.

The last major outbreak of the virus was in 2007-2008 in the Democratic Republic of Congo. It killed 187 of 264 people infected and occurred in the Kasai Occidental Province. A separate outbreak occurred in the Bundibugyo District in western Uganda – it was the first reported occurrence of the new strain Ebola-Bundibugyo with 131 cases and 42 deaths. The patients are given symptomatic treatment to reduce pain and prevent dehydration. Several potential vaccines and drugs are being tested but it could take years before any is available.

There is no specific treatment and vaccine for the virus.

Transmission: The disease is transmitted through direct contact with the blood, secretions, organs, fluids or bodies of infected persons. Family members and health workers handling the patients can become infected easily if they do not wear protective facilities such as gloves and masks. Ebola is not air borne.

Symptoms: The average incubation period is 21 days. The disease is characterised by sudden onset of fever, intense weakness, muscle pain, headache and sore throat. This is often followed by vomiting, diarrhoea, rash, impaired kidney and liver function, and in some cases, both internal and external bleeding.

How to protect yourself: