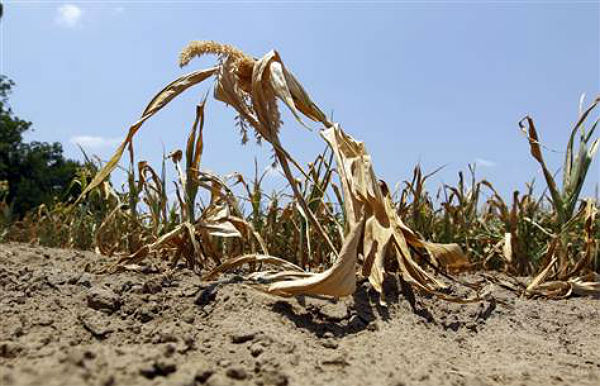 Moderate drought means damage to crops and pastures, with streams, reservoirs or wells getting low. At the other end of the scale, exceptional drought includes widespread crop and pasture losses, as well as shortages of water in reservoirs, streams and wells, creating water emergencies. So far, just 8.64 percent of the country is in either extreme or exceptional drought. 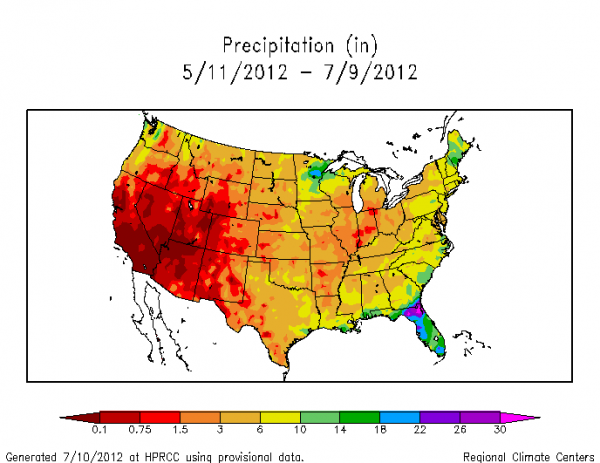 During 2002 and 2003, there were several very significant droughts taking place that had a much greater areal coverage of the more severe and extreme drought categories. Pockets of more severe drought are increasing, but this conditions are spread out over different parts of the country. But, it’s early in the season.

Most troubling is that the drought, which could go down as one of the nation’s worst, has come on extra hot and extra early. It has its roots in 2010 and continued through the winter. The five months from this February to June, for example, were so dry that they shattered a Texas record set in 1917, according to Don Conlee, the acting state climatologist.

A strong La Niña shut off  the moisture from south. The weather pattern called La Niña is an abnormal cooling of Pacific waters. It usually follows El Niño, which is an abnormal warming of those same waters. The National Weather Service’s Climate Prediction Center suggests this dangerous weather pattern could revive in the fall.

One of the biggest impacts of the drought is going to be the shrinking of the cattle herd in the United States, according to Bruce A. Babcock, an agricultural economist at Iowa State University in Ames. That will have a paradoxical but profound impact on the price of a steak. Ranchers whose grass was killed by drought cannot afford to sustain cattle with hay or other feed, which is also climbing in price. Their response will most likely be to get rid of animals. That glut of beef would lower prices temporarily.

In Texas, some cities are experiencing blackouts because airborne deposits of salt and chemicals are building up on power lines, triggering surges that shut down the system. In normal weather, rain usually washes away the environmental buildup. Instead, power company crews in cities like Houston are being dispatched to spray electrical lines.