Moderate to high solar activity for beginning of July

Sprawling Sunspot Cluster 1515 is now directly facing the Earth. This region is responsible for generating at least 5 M-Class solar flares within the past few days, including M5.6 and M3.8 events on Monday. So far on Tuesday, numerous C-Class flares have been detected including a C9.0 flare at 17:02 UTC.

So far the Coronal Mass Ejection (CME) output has been directed mostly away from Earth. This could change at any time.

Sunspots 1513 and 1515 have a Beta-Gamma-Delta magnetic classification and may produce a strong solar flare within the next 24 to 48 hours.  NOAA forecasters estimate a 70% chance of M-class solar flares and a 10% chance of X-flares during the next 24 hours. Sunspot AR1515 continues to grow and crackle with magnetic eruptions. 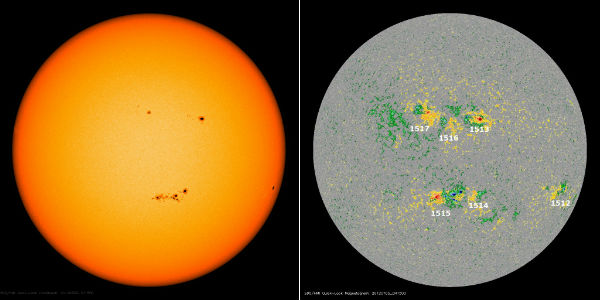 Solar Activity Forecast: Solar activity is expected to be moderate through the period (04 - 06 July) with more M-class flares expected from Region 1515.

Geophysical Activity Forecast: Geomagnetic field activity is expected to be at quiet to unsettled levels through the period (04 - 06 July) with a chance for active levels due to persistent CH HSS effects. Recent CME activity from Region 1515 is not expected to significantly disturb the geomagnetic field.

Two new sunspot region at farside is coming into Earthview. No numbers assigned for now. 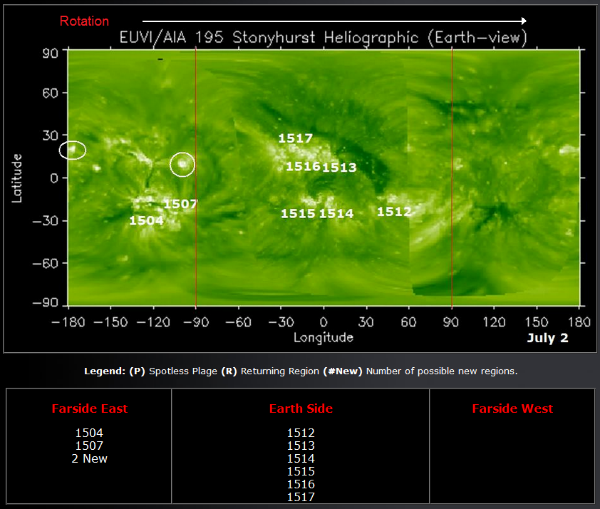