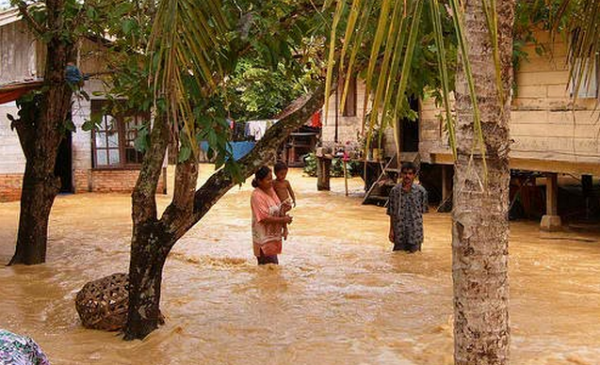 Following heavy rains during the night, volcanic floods hit early morning at 2:00 am (1700 GMT). More than 280 people were evacuated to government offices and schools. Four people have died, 10 are missing and 15 have been injured. Fifty-eight families, or 284 people, have been evacuated. Two bridges and 15 homes were completely destroyed by the floods, while 173 other homes were damaged, Nugroho said.

The floods carried volcanic mud from Mount Gamalama, which forms the entire island of Ternate in the Maluku chain, which erupted and spewed a column of ash 2,000 metres (6,500 feet) into the air in December. Two rivers on the eastern side of the volcano overflowed after Wednesday’s heavy rains carried volcanic debris down to the affected residential areas. (JakartaGlobe)

The Indonesian archipelago has dozens of active volcanoes. The country’s most active volcano, Mount Merapi in central Java, killed more than 350 people in a series of violent eruptions in 2010.