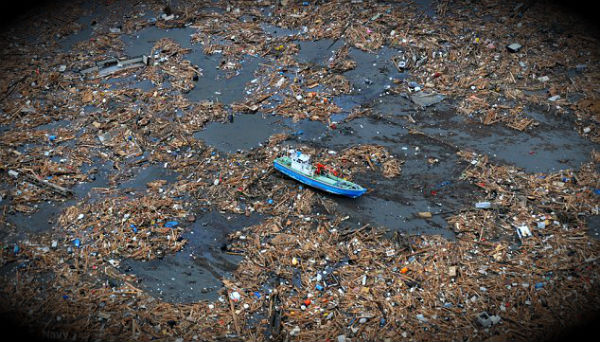 After devastating tsunami on March 11 2011, the Japanese government estimated that 5 million tons of debris was swept up by the event. Estimates are that about 70 % sunk to the seafloor and 1.5 million tons left floating. More than a year later, the debris from that tragedy is still drifting on the Pacific Ocean, though no one can say for sure how much and where. So far, the debris field has spread in length more than 2,000 nautical miles, and is more than 1,000 nautical miles wide (4,000km by 2,000km). Most of it headed eastwards, according to modelling work by the Hawaii-based International Pacific Research Center.

Debris was initially carried by the potent Kuroshio Current, which whips past eastern Japan much like the Gulf Stream in the North Atlantic. The Kuroshio carries surface waters northeast, before eventually turning east in the Kuroshio Extension and then the North Pacific Current. Some debris should reach the west coast of North America within a year or two, while much of it is likely to end up in the floating debris field in the middle of the North Pacific Gyre that is referred to as “the garbage patch.” The IPRC work suggests, at least 95% of the debris that has not sunk will move into the North Pacific “Garbage Patch”.

Over the last 12 months – since debris from the 2011 Japanese tsunami broke up, dispersed and sank – scientists have lost sight of the debris. Immediately after the tsunami, satellite imagery pinpointed large fields of floating debris, but by April 14, 2011, it had dispersed to a point where it was no longer visible with low resolution cameras.

Right now, models tell us some debris could pass near or wash ashore: 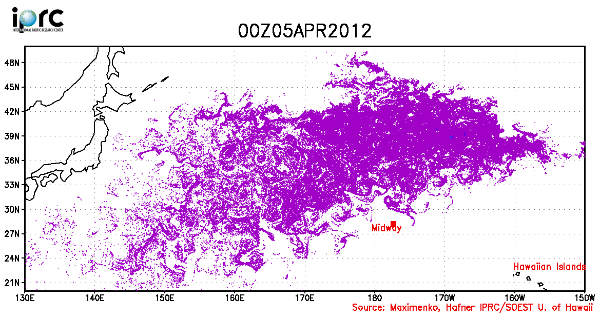 Computer models have predicted that debris from the March 11, 2011 Japan earthquake and tsunami should be striking Midway Atoll beaches in early 2012, but wildlife biologist Pete Leary at the Midway Atoll National Wildlife Refuge reports no increase in debris at Midway as of early March 2012. As of April 3, 2012, there had been very few reports of debris at Midway Island and Kure Atoll. North winds have been minimal in recent months, and ocean currents have favored keeping the debris from the island. But those currents may be shifting and debris should eventually wash up with greater frequency.

Observers in Canada recently detected an abandoned 150-foot Japanese fishing vessel floating offshore of British Columbia. Other reports of debris in Washington and Hawaii came in months ago. But in most cases, the objects were larger and standing above the water line, where they could be pushed like sails at higher speeds. The model shown above tracks objects sitting at or just below the water line. 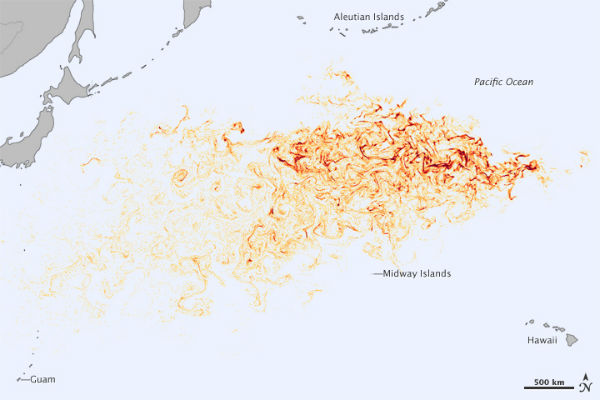 The map above shows the output of the Surface Currents from Diagnostic (SCUD) model, an attempt to simulate where and how that debris would disperse. Orange and red shaded areas represent parcels of water with a high probably of containing floating debris. The deeper the red color, the higher the likely concentration. The debris field stretches roughly 5,000 kilometers by 2,000 kilometers across the North Pacific.

The model begins with more than 678,000 “tracers” being released from various points along the northeastern coast of Japan on March 11, 2011. The initial distribution is based on the density of population and development. The still image above shows the predicted distribution of debris by April 3, 2012. The SCUD model was developed by Nikolai Maximenko and Jan Hafner of the International Pacific Research Center (IPRC) at the University of Hawaii. Using real satellite data on sea surface height and on ocean surface winds—as well as information from scientific drifting buoy networks—the IPRC team makes daily maps of surface currents. Hafner and Maximenko have also collected reports of debris sightings in the ocean, which have so far validated what the model tells them.

15-year projections of the debris field from statistical model

Citizen monitoring and reporting can help NOAA scientists better understand the location and nature of the debris generated by the earthquake and tsunami in Japan. Ships traveling the Pacific Ocean and beachcombers on the coast can now report significant sightings. If reporting a sighting, be sure to include what you saw, when you saw it, and where it was located.  Individuals or groups can request shoreline monitoring guides by emailing MD.monitoring@noaa.gov.

Since debris washes up on our shores regularly, you can also help by downloading the Marine Debris Tracker app for iPhone and Android phones or emailing MD.Monitoring@noaa.gov to request a shoreline survey guide to start collecting information on the amount and location of trash at your beach. This allows NOAA to track changes in how much debris is showing up on U.S. coasts. If you have questions about navigation safety, please contact the U.S. Coast Guard and view the U.S. Department of Transportation’s MARAD advisory. 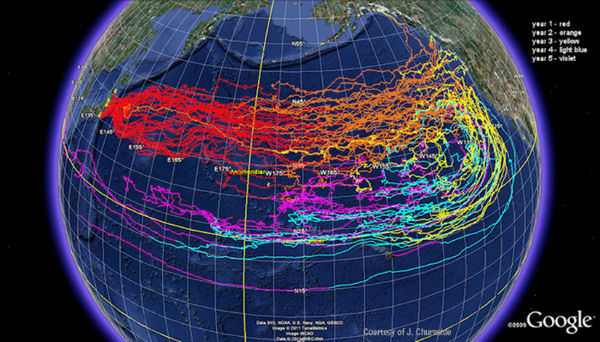 Bellow you can watch propagation of the March 11, 2011 Honshu, Japan tsunami and maximum amplitude plot that were computed with the NOAA forecast method using MOST model with the tsunami source inferred from DART® data. From the NOAA Center for Tsunami Research, located at NOAA PMEL in Seattle, WA