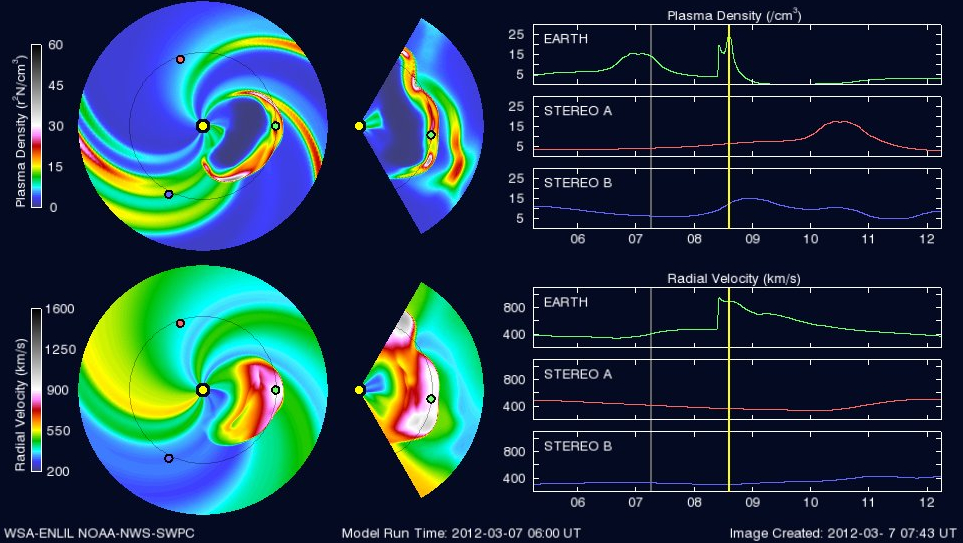 The Solar Wind Speed data from ACE is still unavailable, however as of 7:20 UTC , the CELIAS/MTOF Proton Monitor onboard the SOHO Spacecraft indicates a current SWS of 470 km/s. The Proton Levels are now showing a sudden increase at 08:10 UTC. This is sometimes known to happen when a CME shock front is about to arrive within a couple of hours. I will continue to monitor conditions.

The expected time of arrival is between 06:00-10:00 UTC. This means sometime after 2am EST, we can expect the first signs of the incoming CME Plasma cloud. The solar wind was predicted to increase to over 800 km/s and Strong Geomagnetic Storming will be possible soon thereafter. This latest incoming plasma cloud is the result of the X5.4 and X1.3 Solar Flare event very early this Wednesday morning. I

Sky watchers at all latitudes should be alert for auroras.

This is probably the strongest such event in nearly six years, and is likely more intense than a similar storm in late January, said Joseph Kunches, a space weather specialist at the U.S. National Oceanic and Atmospheric Administration (NOAA). (trust.org)

This solar disturbance is a three-stage affair, or as Kunches said in a telephone interview from Boulder, Colorado: “We hit the trifecta.”

These are the stages he described, with the first two already affecting Earth:

* First, two solar flares moving at nearly the speed of light reached Earth late on Tuesday. Such flares can cause radio blackouts.

* Then, solar radiation hit Earth’s magnetic field on Wednesday, with possible impact on air traffic, especially near the poles, satellites and any astronauts taking space walks. This phase could last for days.

* Finally, the plasma cloud sent by the coronal mass ejection, which is basically a big chunk of the Sun’s atmosphere, is expected to arrive at Earth early on Thursday.

GPS systems used for less-refined functions, such as the turn-by-turn navigation found in many cars, should not be affected, according to NOAA’s Doug Biesiecker.

The ACE Spacecraft detected a shock passage and a Geomagnetic Sudden Impulse measuring 58 nT at the Boulder Station was just recorded. The Coronal Mass Ejection (CME) caused by the X5.4 Solar Flare is now impacting Earth.

Leave a Reply to Paula Naula on Facebook Cancel reply