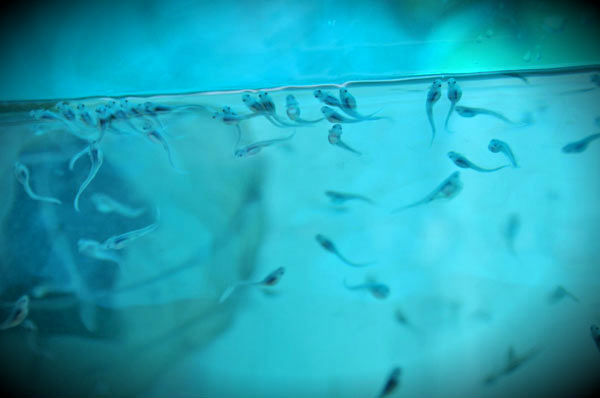 A total of 50,000 artificially propagated acipenser sinensis, Chinese sturgeon, have been born in Yichang, Central China’s Hubei province to increase wild stocks of the rare species. Strugeons, found in the Yangtze River, are one of the oldest creatures on the planet and are thought to have lived at the same time as dinosaurs, dating back 140 million years ago. The world’s first batch of 20,000 artificially bred Chinese sturgeons was born in Hubei in 2009. (Xinhua) 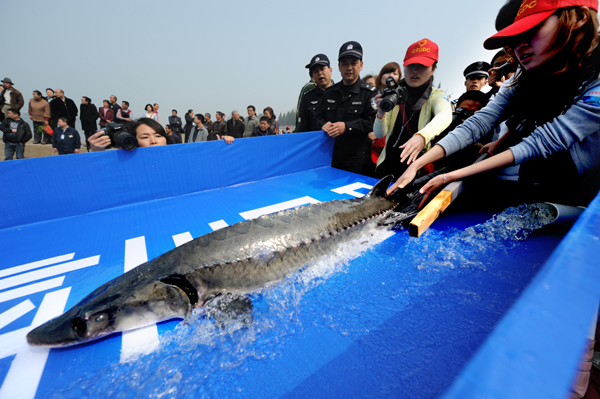 There have been frequent reports of injury or death to Chinese sturgeons – contemporaries of the dinosaurs, and a protected species under Chinese law – in its most important habitat, the lower reaches and mouth of the Yangtze River.

The adult fish swim up the Yangtze River to breed, and on that 1,000-kilometre journey they constantly run a gauntlet of nets and ship propellers, enduring polluted water all the while. China’s Ministry of Agriculture once explicitly banned fishing on the river, but it proved too difficult to enforce. The small profit to be made is still enough motivation for many to spread their nets in the 576-square-kilometre sturgeon protection zone at the river mouth, posing a serious threat to the rare fish.

There are 106 major bridges on the Yangtze River, numerous dams and any number of water control gates, breaking the river into sections, which disrupts the upriver migration of wildlife and changes the river environment. The draining of lake and riverside wetlands to create fields has also deprived many species of grounds to lay their eggs and raise their young. Migrating fish have far fewer places to stop and regain their energy.

There is no solid scientific evidence explaining why so many large, endangered aquatic species are dying, but the experts each have their own hypotheses. The dredging of large channels for shipping has resulted in the loss of the routes the fish normally take. Noise pollution is part of the problem. The Yangtze River Tunnel Project is also giving experts cause for concern. A preliminary report on the expected impact of construction on the migration of the Chinese sturgeon found that piers used to build large bridges are slowing the river, putting the fish at greater risk of injury.

But these events throw light on the importance of protecting rare aquatic life – and warn us, at least, of the Yangtze River’s ecological crisis. (ChinaDialogue)