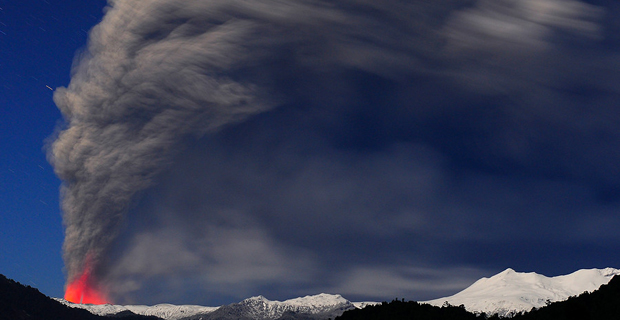 Several Latin American countries in the path of volcanic ash unleashed from a Chilean Andean crater are facing critical shortages of water, agricultural collapse, disruptions in transportation and growing risks to human and animal health. Toxic ash clouds, seen to be dispersing toward Australia, have dumped the ash across vast swathes of territory in Chile, Argentina, Brazil and Uruguay.

The ski season in Patagonia also faced cancellations as volcanic ash affected airport operations at Bariloche, Argentina, and clogged waterways including a river that runs off the slopes of the volcano.

Several thousand inhabitants of nearby towns and villages in Chile and Argentina remained displaced, though some were allowed to return to their damaged homes.

Argentina said it faced an agricultural emergency in its Patagonian region as the blanket of ash left thousands of farm animals without pasture or water.

An estimated 750 000 sheep have been affected in Argentina alone. Data from Brazil, Chile and Uruguay weren’t immediately available. Sergio Pena, an Argentine livestock director said sheep were among the worst affected animals in the area.

“Sheep not only have little to eat but the ash grinds their teeth, further complicating the situation,” he said. Pena said local Argentine agricultural business could look to a much lower wool yield as a result of the ash contamination. The Chubut region was previously hit by a drought that lasted four years and killed more than 1 million sheep.

In Chile, ash and rocks pouring into the Nilahue River raised the temperature to 113 degrees Fahrenheit and killed more than 4.5 million fish, leaving local communities destitute or in need of government help. National Fishing Service Director Guillermo Rivera told El Mercurio newspaper that fish loss was a direct result of the hot volcanic ash and rocks choking the river.

The La Tercera newspaper said the river looked like a “thick, vaporous torrent of chocolate.” Officials said the long-term effects for the marine life of the lakes and rivers of the area will be a hard hit for the fishing industry and tourism. “I’ve never seen the lake like this. It’s a disaster,” Eudulio Velasquez, a cattle rancher, told La Tercera. “I fish here in the Lago Puyehue and the Rio Gol Gol but I don’t know if I’ll be able to fish here anymore. I think that all the salmon and trout species have been wiped out in the Gol Gol. It’s a tragedy for all the native species,” Velasquez said.

Infrastructural damage from the ash has added to disruptions. Ash, landslides and snow blocked the Cardinal Samore Pass between Argentina and Chile after one of the walls collapsed. The trucking route along the Pino Hachado crossing in the Araucania region was also blocked with vehicles carrying cargo to and from Argentina, Brazil, Chile, Paraguay and Uruguay stranded in the border region. (TerraDaily)

According to the director of the National Service of Geology and Mining (Sernageomin), Enrique Valdivieso, the behavior of this complex volcanic eruption keeps on red alert communes of Futrono, Lago Ranco Río Bueno and in the Region of Rivers and Puyehue commune in the Lake District – similar to what happened in 1960.

“We initially had the idea that this is a fault, a fracture. Today and yesterday we flew over the area with accurate data. Has formed a cone at a point quite distant from the cone of the volcano Puyehue. This is about eight miles away and this cone is formed in a crack parallel to that of 1960, ” Valdivieso said. (LaTercera)

On June 4, 2011, Puyehue-Cordón Caulle in Chile experienced its first major eruption in decades. The volcano sent an ash plume eastward, disrupting air traffic, threatening water supplies, and even dropping golf ball-sized pumice on parts of Argentina. From the start, the volcanic plume towered over local clouds.

At mid-latitudes, the bottom of the Earth’s stratosphere begins around 10 kilometers (6 miles) above the surface. Stratospheric winds have a strong tendency to carry material eastward, so volcanic ash from this eruption may travel great distances, disrupting air traffic as it goes.

Volcanic ash is very different from ash from ordinary fires, which is soft and fluffy. Volcanic ash is made of tiny, jagged particles of rock and glass that are very abrasive and slightly corrosive, and can even conduct electricity when wet. Volcanic ash can irritate respiratory systems, coat vegetation and leave it inedible to wildlife and livestock, and destroy machinery. By working its way into airplane engines, volcanic ash can take down planes in mid-flight.

Because of the hazards volcanic ash poses to airplanes, eruptions frequently cause delays and diversions to air traffic. The Puyehue-Cordón Caulle eruption was no exception. Argentinean air traffic has been hampered, and by June 13, 2011, the ash had spread as far away as Australia and New Zealand, according to news reports. (Earth Observatory)