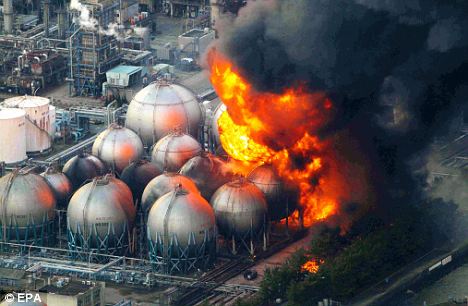 Japan has declared a state of emergency at a nuclear power plant after its cooling system failed following today’s massive earthquake. So far officials have said there is no leak of deadly radiation from the crippled facility in Onahama city, about 170 miles north-east of Tokyo in the Fukushima prefecture. But around 2,800 residents within a two-mile radius of the plant have been ordered to evacuate the area. Chief Cabinet Secretary Yukio Edano said the nuclear power plant developed a mechanical failure in the system which cools the reactor after it was shut down in the earthquake.

Flames soared hundreds of feet into the air from the terminal which is based in the sea and felt the full force of the earthquake. The nuclear plant’s owners confirmed that water levels inside the reactors at its Fukushima-Daiichi nuclear plant were falling but it was working to maintain water levels to avert the exposure of nuclear fuel rods. 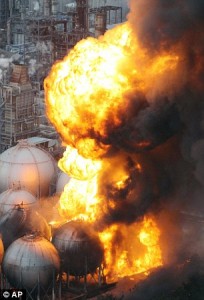 The Onahama plant is one of ten nuclear power plants in the Fukushima district. The quake also started a fire in a turbine building at another nuclear power plant in Onagawa in the neighbouring Miyagi prefecture, but the reactor building was reported to be secure. Tohoku Electric Power said smoke was observed coming out of the building, which is separate from the reactor, and the cause was under investigation. The company also said there have been no reports of radioactive leaks or injuries. The International Atomic Energy Agency, the world’s nuclear watchdog, said today that it was seeking further details about the situation at a Japan’s Fukushima Daiichi nuclear power plant. Residents living within a 3-kilometer radius of the plant were asked to evacuate, while residents living within a zone 3 to 10 kilometers away were asked to stay inside their homes. About 2,000 people were affected by the evacuation order.

The International Atomic Energy Agency is scrambling for details from contacts with Japan’s industry ministry, while saying in a statement that at least four nuclear power plants ”closest to the quake have been safely shut down” after the 2:46 p.m. quake with a magnitude 8.8.

According to the ministry, a total of 11 nuclear reactors were automatically shut down at the Onagawa plant, Fukushima No. 1 and No. 2 plants and Tokai No. 2 plant after the biggest-magnitude quake in the country’s modern history. 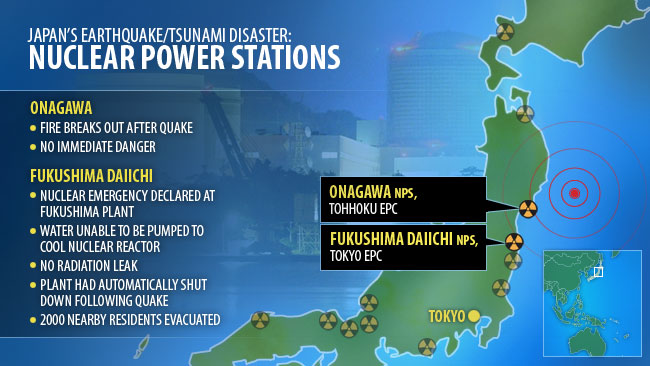