A new study by NOAA shows the promise of forecasting meteotsunamis after scientists were able to reconstruct the first documented meteotsunami in the Great Lakes in 2018.

On April 13, 2018, a huge wave surged across Lake Michigan, flooding the shores of Ludington and damaging properties. With the help of a local citizen's photos and other data, NOAA scientists were able to reconstruct the event in models and confirmed that this was the first documented meteotsunami in the Great Lakes triggered by an atmospheric inertia-gravity wave.

An atmospheric inertia-gravity wave is a wave of air that can run from 10 to 97 km (6 to 60 miles) long that is created when a stable air mass is displaced by another air mass with significantly different pressure. This sets in motion a wave of air with rising and falling pressure, which can affect the water below as it synchronizes with the water movement on the lake's surface.

"That meteotsunami was hands down off the chart awesome," said Debbie Maglothin, a Ludington local who took photos of the event. "The water in between the breakwaters didn't go down like the water on the outside of them, so it created waterfalls that cascaded over the breakwaters. Had this event occurred during summer it could have washed people right off the breakwaters"

While meteotsunamis triggered by this type of atmospheric condition is common in other parts of the world, it is considered rare in the Great Lakes. There are no forecast models that predict meteotsunamis effectively in the U.S., but with the new research by NOAA, scientists may be able to predict these meteotsunami-driving atmospheric waves minutes to hours in advance. 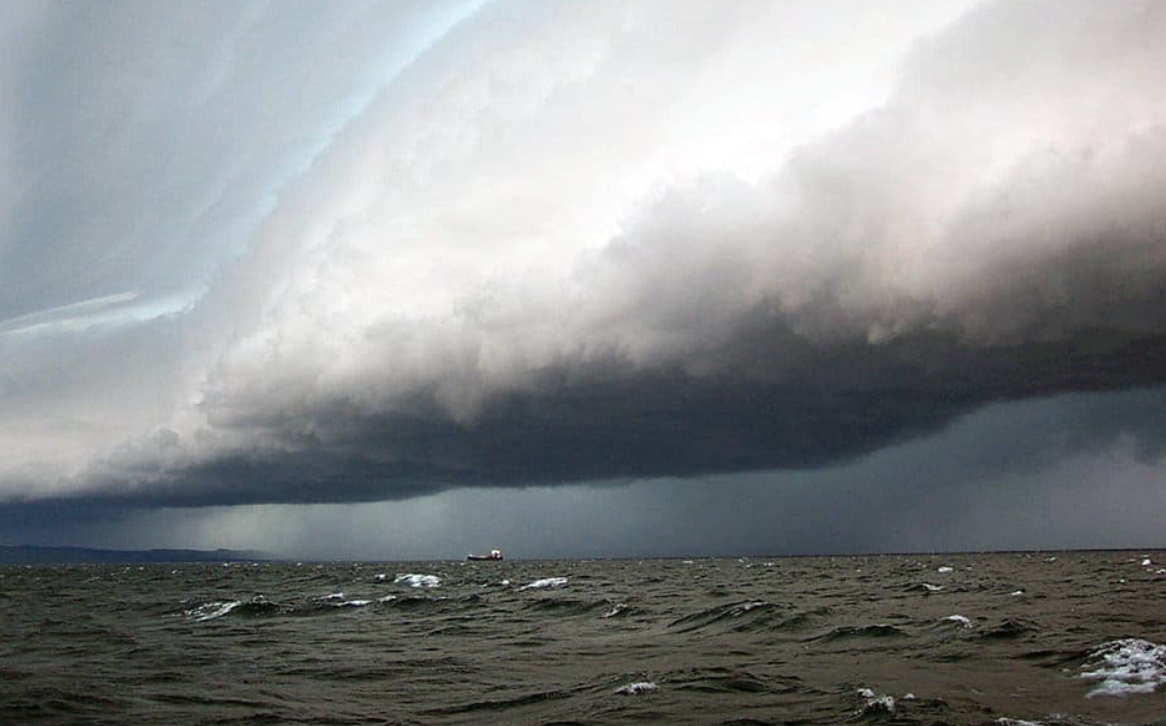 "The good news with this type of meteotsunami is that it is easier to predict than ones triggered by thunderstorms," said Eric Anderson, an oceanographer at NOAA's Great Lakes Environmental Research Laboratory and lead author of the study. "Our short-range weather models can pick up these atmospheric pressure waves, whereas predicting thunderstorms are more difficult."

"Because the lakes are relatively small, meteotsunamis typically need more than a jump in air pressure to drive them," Anderson added. "That's where the thunderstorms and wind come in to give them a push."

Forecasting these waves in advance would allow for earlier warnings and enable residents to take measures in protecting themselves and their properties. While the Ludington meteotsunami caused some property damage, no serious injuries were reported.

"It's a gap in our forecasting," said Anderson. "With this study and other research we are getting closer to being able to predict them in advance."

On Friday, April 13, 2018, a high-amplitude atmospheric inertia–gravity wave packet with surface pressure perturbations exceeding 10 mbar crossed the lake at a propagation speed that neared the long-wave gravity speed of the lake, likely producing Proudman resonance. A set of meteotsunami waves struck the shores near Ludington, Michigan, a coastal community along the sandy dunes of Lake Michigan. During the event, harbor walls were overtopped, damage occurred to shoreline homes and boat docks, and water intake pumps were impacted due to the large change in water level. To fully understand the generation of this event and the impacts to the coastal community, we have carried out atmospheric and hydrodynamic model simulations of the inertia–gravity and meteotsunami waves. Atmospheric simulation of the inertia–gravity waves was performed using a high-resolution model for the Great Lakes region that mimics the National Oceanic and Atmospheric Administration High-Resolution Rapid Refresh operational model. Surface meteorological conditions were supplied to the Lake Michigan-Huron Operational Forecast System, an operational model used for hydrodynamic forecast guidance. This is the first documented case of a meteotsunami generated by an atmospheric inertia–gravity wave in the Great Lakes, and it provides an evaluation of existing and proposed operational infrastructure as it pertains to meteotsunami forecasting in the USA.