A team of scientists successfully installed an optical seismometer on La Grande Soufrière volcano's summit– the first high-resolution instrument placed on an active volcano. The seismometer, used to monitor gas and steam eruptions, survived the summit's hostile environment, unlike other previous instruments that were quickly destroyed. Researchers described the area as "hellish," sweltering at more than 48 °C (118 °F) and is engulfed in billows of acidic gas.

"It could be beautiful at the bottom of the volcano, but hellish at the top at the same time," said lead author Romain Feron from the ESEO Group and the LAUM laboratory at the Le Mans University.

Feron and his colleagues climbed the La Grande Soufrière volcano in September 2019 and installed the optical seismometer just about 10 m (33 feet) away from a spewing fumarole.

They used gas masks to protect themselves from the hazardous gases spewed by active fumaroles. The team also monitored the weather during the installation.

"It becomes very risky to climb the steep and slippery slopes of the volcano with heavy equipment on the back, not to mention lightning," he further described.

The motion of the instrument is estimated with an interference phenomenon, which happens when an infrared laser beam is reflected by the mirrored surface of the mobile mass. 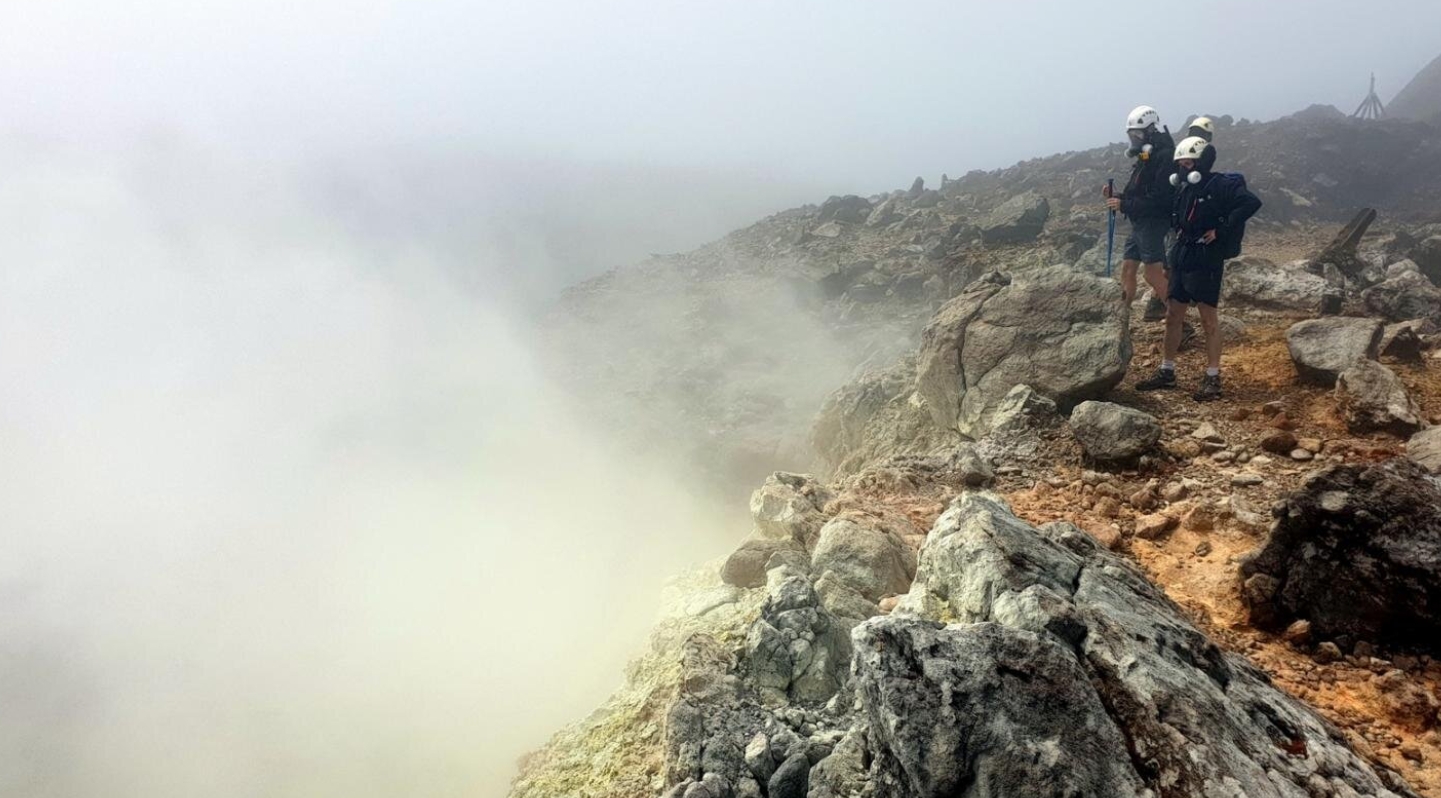 The laser beam is carried between the seismometer at the summit and a remote, as well as a safe optoelectronic station through a long fiber optic cable, climbing the slope of the volcano.

The station measures the ground displacement and sends the records in real-time to the French Volcanological and Seismological Observatory of Guadeloupe.

It purely operates mechanically and does not require a power supply that would be prone to the dangers of the summit's environment. The instrument is encased in Teflon to protect it from sulfuric gases.

"It is, to our knowledge, the first high-resolution optical seismometer ever installed on an active volcano or other hazardous zones," the team stated.

It took 10 years to develop the instrument, and its success indicates that it could be a good seismic solution in other dangerous environments, such as oil and gas production fields, nuclear power plants, and geothermal reservoirs with smoldering temperatures.

The optical seismometer, now in operation on La Grande Soufrière for nine months, is gathering data that will be combined with other observations from the Guadeloupe observatory to better monitor the volcano.

Its last major eruption of gas and steam in 1976 prompted evacuations in the capital Basse Terre. The dome and summit fumaroles have become increasingly active since 2018. 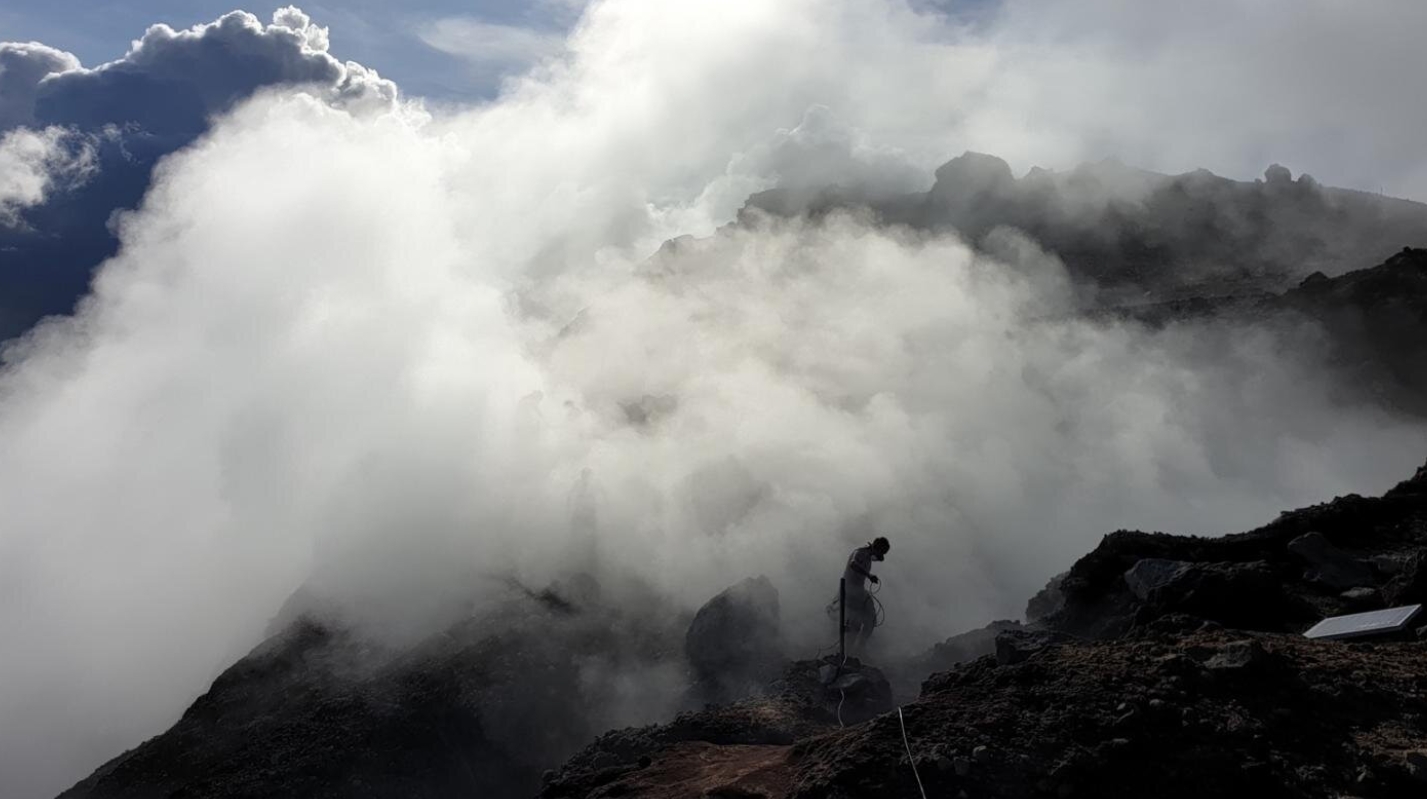 ​Laying the optic cable near he fumarole at the summit. Image credit: Romain Feron

Accurate monitoring of volcanic activity demands expertise in fields including geophysics, geology, and geochemistry. Data obtained from the most recent technical advances are particularly vital in pre‐eruptive phases. In particular, seismic monitoring in near real time is essential to locating and discriminating early signs among different sources of seismic waves, especially those related to movement and overpressure in underground fluids. Among the major indicators of volcanic restlessness are fumaroles, or gas and steam vents, often located near a volcanic summit. Their activity could be monitored by seismometers in their vicinity, but today’s standard instruments cannot last very long when exposed to the high temperatures and the billowing, sulfurous, acidic gases near a fumarole. Conventional gear may also not be accessible for emergency deployment, or repair, even in pre‐eruptive phases. La Soufrière de Guadeloupe Volcano in the Caribbean typifies such challenges. Its last significant event was a phreatic (gas and steam) eruption in 1976 that prompted evacuation of the archipelago’s nearby capital. Since early 2018, the 1467‐meter‐high stratovolcano has shown signs of increased activity. To provide a hardy, high‐resolution monitoring system, we installed a recently developed type of seismometer just 10 m from a vigorous summit fumarole. The sensor is a purely opto‐mechanical geophone that is interrogated through a 1.5 km fiber‐optic cable by a remote, and thus it is a much safer optic‐electronic system down the volcano’s flank. The ESEO Group and the Institut de Physique du Globe de Paris (IPGP) started development of this novel seismometer in 2008. The 2019 Guadeloupe installation is part of the HIgh PERformance SeISmometer (HIPERSIS) project (French Agence Nationale de la Recherche [ANR]). It is, to our knowledge, the first high‐resolution optical seismometer ever installed on an active volcano or other active, hazardous zone. We report here the details of this installation, the means we are using for measurements, and our implementation strategy, and we share some of the first results. Such an optical seismometer, as well as a variety of other geophysical sensors built on the same principle, can be installed in a wide variety of sites with fibers up to 50 km long.