The Sun's magnetic activity fluctuates in a rhythm of about 11 years, which is reflected in the frequency of sunspots. During solar maximum, huge sunspots and active regions appear on the surface of the star.

Scientists have long been puzzled over the reason behind this cycle, and they have related it to the conditions beneath the Sun's skin– a layer of hot plasma that is constantly in motion. Now, a team of scientists from the Max Planck Institute for Solar System Research has succeeded in drawing the most comprehensive picture of this plasma flow.

Researchers have discovered a notable simple flow geometry– the plasma describes a single turnover per solar hemisphere that lasts for some 22 years. The flow in the direction of the equator at the convection zone's bottom also causes spots to develop closer to the equator during the cycle.

"Over the course of a solar cycle, the meridional flow acts as a conveyor belt that drags the magnetic field along and sets the period of the solar cycle," said lead author Dr. Laurentn Gizon, an MPS director.

"Seeing the geometry and the amplitude of motions in the solar interior is essential to understanding the Sun's magnetic field," he added.

Gizon and his team used helioseismology to map the plasma flow below the surface of the Sun.

Helioseismologists use sound waves to analyze the Sun's interior, the same way geophysicists use earthquakes to study the Earth's interior. Solar sound waves have periods near five minutes and are continuously triggered by near-surface convection.

The motions associated with solar sound waves can be measured at the surface by spacecraft or telescopes on the ground. For this study, the team used observations of sound waves at the surface that generate n the north-south direction through the solar interior. These waves are perturbed by the meridional flow– they move faster along the flow, rather than against the flow.

Due to its small size, the meridional flow is extremely difficult to spot in the solar interior. 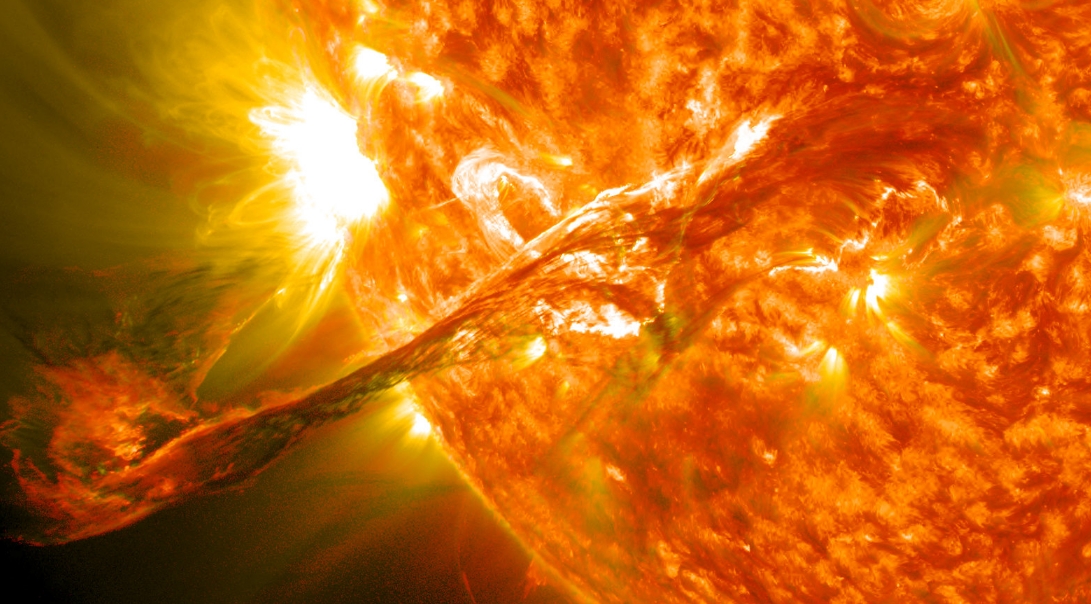 "The meridional flow is much slower than other components of motion, such as the Sun's differential rotation," Gizon explained. The meridional flow throughout the convection zone is no more than the maximum surface value of 50 km/h (31 mph).

"To reduce the noise level in the helioseismic measurements, it is necessary to average the measurements over very long periods of time," said Dr. Zhi-Chao Liang of MPS.

"This makes it possible to average over long periods of time and to compare answers, which is absolutely essential to validate inferences."

The researchers discovered that the flow is equatorward at the base of the convection zone, with a speed of only 15 km/h (9 mph). The overall picture is that the plasma goes around in one massive loop in each hemisphere, and the time taken for the plasma to complete the loop is about 22 years.

Sunspots also emerge closer to the equator as the cycle progresses.

"All in all, our study supports the basic idea that the equatorward drift of the locations where sunspots emerge is due to the underlying meridional flows," said Dr. Robert Cameron of MPS.

"It remains to be understood why the solar meridional flow looks like it does, and what role the meridional flow plays in controlling magnetic activity on other stars," Gizon added.

The Sun’s magnetic field is generated by subsurface motions of the convecting plasma. The latitude at which the magnetic field emerges through the solar surface (as sunspots) drifts toward the equator over the course of the 11-year solar cycle. We use helioseismology to infer the meridional flow (in the latitudinal and radial directions) over two solar cycles covering 1996–2019. Two data sources are used, which agree during their overlap period of 2001–2011. The time-averaged meridional flow is shown to be a single cell in each hemisphere, carrying plasma toward the equator at the base of the convection zone with a speed of ~4 meters per second at 45° latitude. Our results support the flux-transport dynamo model, which explains the drift of sunspot-emergence latitudes through the meridional flow.