A new study reveals how the Maritime Continent weakens tropical monsoon rainfall in Asia through cross-equatorial flows (CEF) in Australia. The CEFs in the lower atmosphere has a significant role in the transport between mass, moisture, and energy between the northern and southern hemispheres. They also serve as one of the crucial components of the Asian monsoon system.

"CEFs have a profound effect on the weather and climate anomalies in Asia," said research author Moran Zhuang, a P.h.D. candidate from the Institute of Atmospheric Physics under the Chinese Academy of Sciences.

"Most previous [studies] focused on either the effect of the orography alone or the response of the global climate due to the land-sea contrast in Maritime Continent with a coarser-resolution model. In our study, we use an atmospheric general circulation model of [the] finer resolution," he continued.

Professor Duan Anmin, Zhuang's supervisor and also a co-author of the study, further explained, "And instead of focusing on only one factor, our study is the first attempt to explore the relative impacts of diverse Maritime Continent (MC) factors on the CEFs north of Australia and tropical Asian monsoon rainfall, and reveals the indirect effect of the MC on weakening precipitation over South Asia."

The factors covered in this study include the land-sea contrast, orography and surface roughness over the MC. 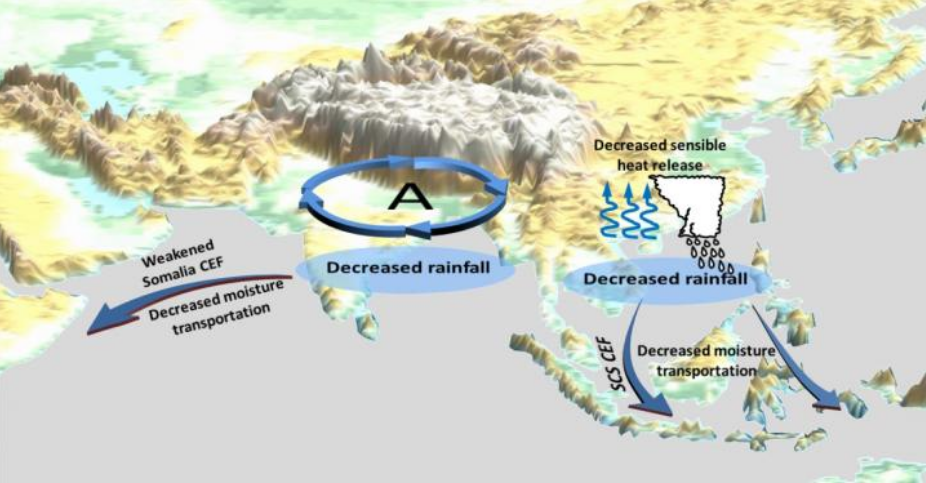 The findings show that the Australian CEF would be a homogeneous, thin southerly flow without the MC. The presence of the islands produces three CEFs originating from north of Australia to the South China Sea (SCS), Celebes-Moluccas and New Guinea, and the orography intensifies the Celebes-Moluccas CEF further and shifts the New Guinea CEF.

In addition, the presence of the islands over the MC directly weakens the transport of moisture, which results in lessened monsoon rainfall around a quarter over the SCS. On the other hand, the rainfall over South Asia decreases by half.

Second, the presence of the islands can obstruct the westward propagation of the quasi-biweekly oscillation.

Third, the reduced rainfall over South Asia can weaken the Somali CEF, which leads to less moisture transport into South Asia.

"Studying how the CEFs are formed helps us further understand the Asian monsoon circulation and precipitation," Zhuang explained.

This study uses an atmospheric general circulation model to examine the relative effects of Maritime Continent (MC) orography, surface roughness, and land–sea contrast on the three cross-equatorial flows (CEF) north of Australia, including the South China Sea (SCS), Celebes-Moluccas (CM), and New Guinea (NG) CEFs, and Asian monsoon precipitation during boreal summer. Four experiments are conducted: with islands, with islands without orography, with islands with ocean roughness and no orography, and with ocean only in the MC region. At the approximately 1° horizontal resolution of these sensitivity experiments, results indicate that the land–sea contrast and orography in the MC have complicated impacts on the CEFs. The land–sea contrast creates the three CEFs. The orography is dominant in deepening, concentrating, and strengthening the CM CEF and modulating the longitudinal location of the NG CEF. For the intensity and depth of the SCS and NG CEFs, the surface roughness over the flat MC and orography are both important. In addition, the MC modulates the monsoon rainfall in tropical Asia. The decreased rainfall (by roughly 57% and 21.4% over South Asia and the SCS, respectively) is dominated by the reduced moisture availability resulting from the presence of the land–sea contrast, thereby intercepting the westward propagating quasi-biweekly convection. The surface roughness over the MC is key in reducing precipitation through reducing moisture convergence over Sumatra, Borneo, and northeastern New Guinea. However, the orography controls the intense precipitation over southwestern New Guinea and the adjacent seas through enhancing the moisture transport carried by the CM and NG CEFs.