Scientists have discovered a series of previously unknown volcanoes just off the coast of SW Sicily, Italy. The three northern volcanoes show a tuff cone-like morphology while the three most southern edifices have a truncated-conical shape. Ages of all newly discovered volcanoes are Late Quaternary. Only the northernmost volcano shows indications of a post-Last Glacial Maximum magmatic reactivation.

The Graham and Terrible banks, located about 35 km (21 miles) from the south-western coast of Sicily, host a large number of volcanic constructs, the most famous being the ephemeral Ferdinandea Island, authors said in the abstract of the new study, published recently in Elsevier's Marine Geology. 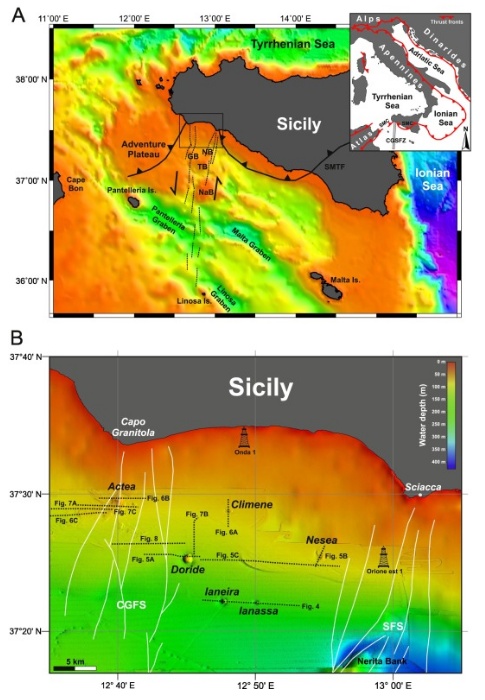 In the study, the researches presented recently acquired swath bathymetric data and magnetic measurements, in conjunction with high-resolution seismic profiles, which reveal the presence of another six volcanic edifices located very close to the Sicilian coasts, one of which is only 7 km (4.3 miles) away.

3 of these volcanic constructs have been previously identified only on the basis of available seismic profiles, but their morphology and their volcanic nature had so far not been documented. 2 edifices to the north show a possible tuff cone/ring-like morphology modified by crater breaching, while the three southernmost volcanoes have a truncated-conical shape.

Only the Actea volcano shows indications of magmatic reactivation, possibly between the LGM and the initial post-LGM transgressive phase. This reactivation is evident by the emplacement of a prominent young lava flow.

The discovery of submerged volcanoes so close to the populated coast of Sicily demonstrates that there are large submerged areas near the littoral that are still little known and studied, and underlines how crucial it is to analyze the issue of volcanic risk for densely inhabited coastal areas like Sicily.