A non-tropical cyclone/nor'easter offshore South Carolina / North Carolina has rapidly deepened, with central pressure down 20 hPa in just 9 hours. Hurricane-force winds have been near its center since 18:00 UTC, April 2. Radar-derived winds aloft have been close to 185 km/h (115 mph). The low pressure system is expected to develop further overnight as it moves offshore the Eastern Seaboard.

This impressive cyclone off the East Coast will bypass the Northeast while heading to the Canadian Maritimes, NWS said. Residents should expect some hazards for the Northeast quad of the country; locally heavy precipitation, gusty winds and an elevated fire weather threat. 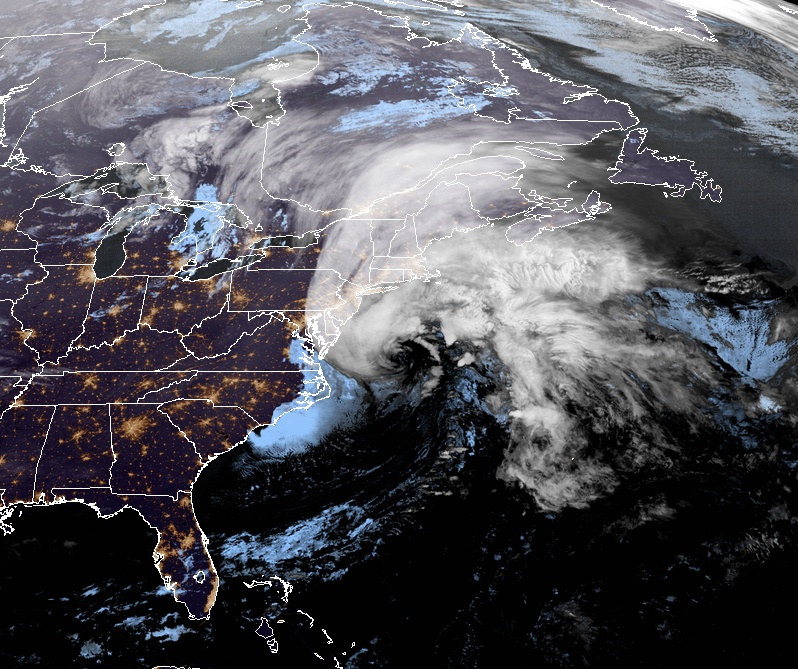 It will continue to bring rain to areas along the Northeast Coast into tomorrow, though the heaviest rainfall should remain offshore. Late season accumulating snow is also possible across parts of interior New England, with gusty winds likely along the coast and hurricane force winds possible over the open water closer to the low center.

"A 24-hr GOES-East water vapor loop showed a shortwave trough quickly advance across the southeast U.S during the previous evening and interact with a low situated off the Georgia coast by the afternoon," NWS meteorologist Bill Line said.

"The features organized into a single much larger storm that accelerated to the north-northeast just off the east U.S. coast. Rapid strengthening of the storm is evident as dry air expands on the southwest descending side of the low, and cool air expands and clouds develop on the northeast ascending side of the low, wrapping around the center of the low in a counterclockwise manner. Convection is also obvious near the center of the low, as well as along a cold front extending south. MSAS MSLP analysis contours overlaid on the water vapor imagery help depict the organization and deepening of the surface low."