Palu was the worst-affected area with more than 1 700 casualties. Search and rescue operations there were stopped on October 12, according to Indonesia’s national disaster management agency. At least 1 075 people are still reported missing.

Roughly 133 630 people are still displaced across Central Sulawesi, CWS said. Thousands more have left the province or found refuge with host families. The government-led response continues to address humanitarian needs while progressively transitioning into the recovery and reconstruction phase.

The mainshock was preceded by a sequence of foreshocks starting about three hours earlier with a M6.1 event, followed by several others, all located in the area immediately south of the mainshock epicenter. At least 1 person was killed by fallen debris while 10 others were injured during this quake. Authorities confirmed that dozens of structures were either damaged or destroyed.

The mainshock occurred at 10:02 UTC (18:02 WITA), during rush hour traffic. The shaking was felt as far away as Samarinda, the capital of East Kalimantan, to the west and Makassar in the south. It was also felt in several parts in Gorontalo, located on the north and was also felt in Tawau, Malaysia. Violent shaking was reported in Donggala and Palu. Blackouts occurred throughout the area and telecommunications went down. 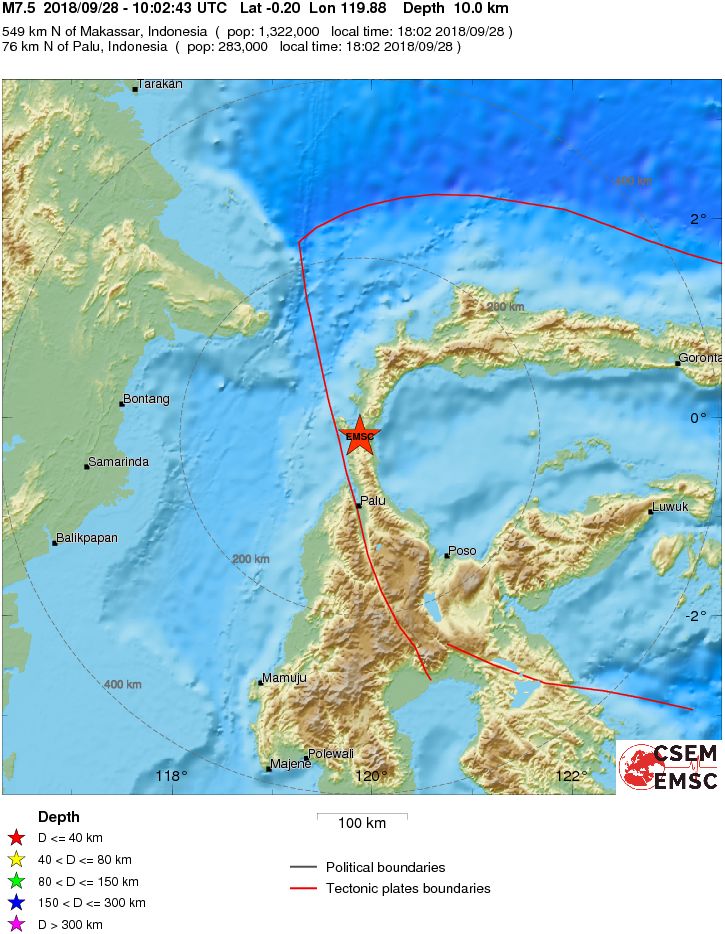 More than 70 000 houses are reported to be damaged, forcing tens of thousands of people to live in shelters and tents.

The tsunami, however, struck higher than expected; one explanation is that the earthquake triggered underwater landslides, causing the tsunami. Residents of Palu reported waves with heights of more than 2 m (6.5 feet) while several others stated that the waves managed to reach the second floor.

Even though officials did send warnings via telephones and televisions, tsunami alarms were not activated. The Palu Nomoni Festival in Talise Beach was continued and most of the festival attendees didn't realize on the possibility for a tsunami to occur. Eyewitnesses even stated that some people were still strolling on the beach when the tsunami struck. It was estimated that hundreds were caught off guard and swept away by the waves.

As Palu was located at the end of a narrow bay, the tsunami's force was intensified when the waters entered. Officials confirmed that the waves that struck Palu had actually reached a height of 5 m (16 feet), with some as nearly as high as 6 m (19.6 feet).

Parts of Central Sulawesi have been hit by major mudflows following the earthquake as a result of liquefaction. The most affected areas are the Petobo sub-district in southern Palu and the village of Balaroa, just outside the city, both locations some distance from the coast.

Featured image: Balaroa, a district in Palu, was completely obliterated by the soil liquefaction that followed immediately after the earthquake. Credit: Makassar Regional Disaster Mitigation Agency