The new 5G network promises to revolutionize mobile telecommunications. But it could also push telecommunications companies onto the frequencies used by the Bureau of Meteorology’s weather radars, indirectly putting the accuracy of weather information at risk.

The issue stems from a federal government proposal to auction off part of the 3.6 gigahertz frequency band for use by the new 5G network. In turn, regional internet service providers who currently use this frequency band would be moved to the 5.6GHz band – which is already used by weather radars.

The move – which is open for public consultation until June 29 – has prompted concerns that the full implications of the proposal have not been properly considered. Potential problems with this sharing arrangement include interference that might manifest as “fake” rain clouds on weather radars. More broadly, it sets a precedent for spectrum sharing, which may be a concern for others, including the Defence department.

A wide range of private and public sector organizations use the radio frequency spectrum for communications, broadcasting, and other purposes. The Australian Communications and Media Authority (ACMA) is responsible for allocating frequencies to all these competing users.

ACMA’s job is getting harder all the time, because while demand for spectrum bandwidth is constantly growing, there is only a finite amount of it to go around.

The number of connected devices is increasing, not just because of consumers’ growing thirst for mobile data, but also because of concepts such as the Internet of Things. Internet users in regional areas are also turning to wireless networks, as a more cost-effective way of increasing their data rates than running fiber to the home.

The radio frequency band is thus getting more crowded all the time. The available options to deal with this congestion are to use higher frequencies or to share the available spectrum more effectively.

Telecommunications in Australia use spectrum in the low or sub-gigahertz range. Options are being explored by telecommunications companies and regulators to use higher frequencies such as those available above 26GHz. But signals sent using these higher frequencies are affected by weather and are limited in distance. Technology is advancing all the time, but there is a limit to what science can do.

There are some clever ways around the problem, however. Communications engineers are looking to optimize the limited resource by physically separating users through power and antenna design. One example is the antenna design of the latest generation of communications satellites, which use highly directional beams. The effective bandwidth of these satellites is thus much bigger because they can effectively “reuse” the same frequencies multiple times.

Another option is Dynamic Frequency Selection (DFS) technology, which involves rapidly switching frequency when interference is detected. This allows different communication systems to share the same portion of the spectrum.

Another way of minimizing congestion is to work out where spectrum is being underused. Earlier this year, a federal government review pointed out that much of the available bandwidth is taken up by government uses, and recommended that government agencies should look at sharing or trading their frequency allocations, allowing the same frequencies to be used for different purposes. 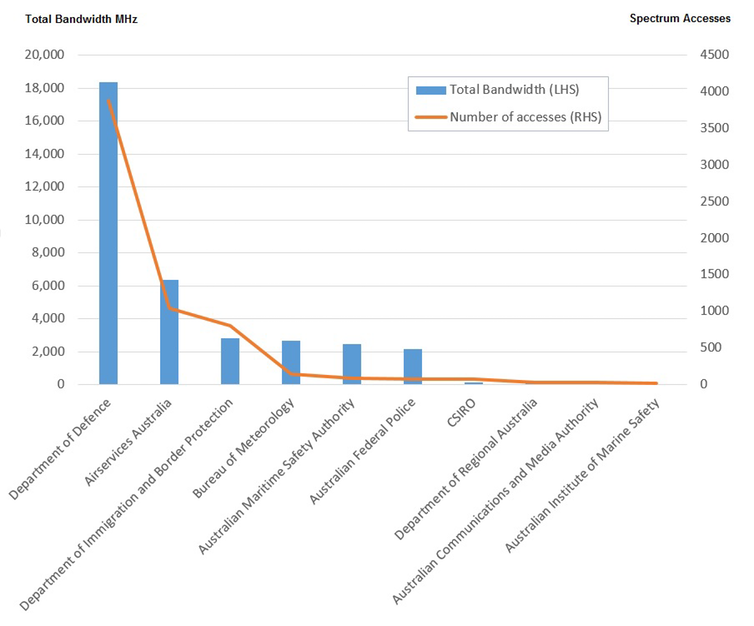 Radar systems, such as weather and military radars, make up a significant proportion of this government bandwidth usage. But these frequency bands are also attractive for mobile telecommunications, as they offer high data rates, reliable services and equipment compatibility.

That is why private telecommunications providers are now eyeing off these parts of the radio frequency spectrum. It’s easy to see why this is a contentious proposition. The Department of Defence recently acquired a naval radar system that operates in spectrum allocated to urban mobile telecommunications. To avoid interference, the Navy does not operate these radars near urban centers.

For the past decade, ACMA has dealt with these competing demands through its annual Five Year Spectrum Outlook. Its latest outlook proposed moving regional internet providers onto frequencies used by weather radars, so as to free up parts of the spectrum for future 5G mobile communications.

The technical issues surrounding this proposition are far from simple. Signals could interfere with one another not just directly, but also via “leakage” into adjacent parts of the spectrum. At stake is the provision of accurate weather information, and this is not an issue we should take lightly. 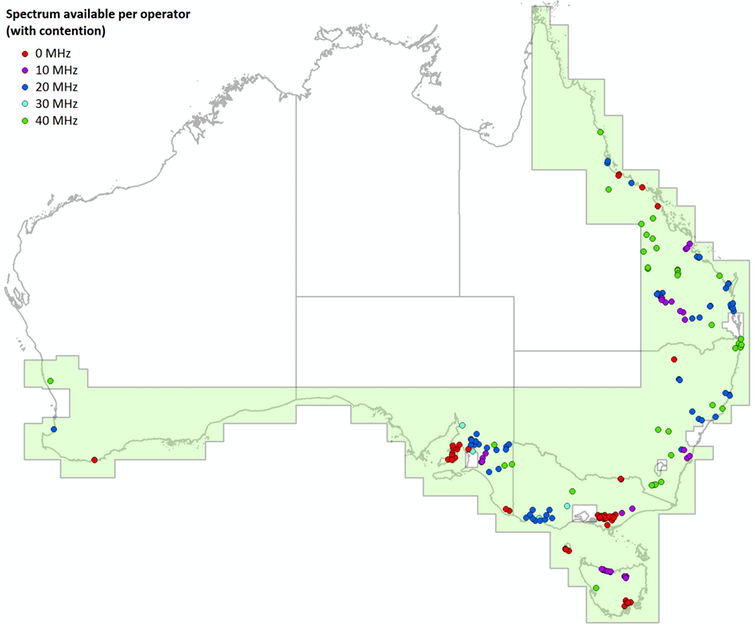 The ACMA proposal identifies options to physically separate telecommunications equipment from weather radar sites that use the same frequency. Nominally a 40 km distance would provide 'line of sight' separation, but in reality terrain and other criteria may demand a greater distance.

Hence there may be a prospect of interference even under a limited regime. The government is facing a tricky balancing act in freeing up enough space for a robust 5G network while not hampering weather data in the process.

ACMA has dealt with decisions like this before, but arguably never one as important as this. This is a pivotal moment, both for the accuracy of our weather information and the future of our telecommunications network.