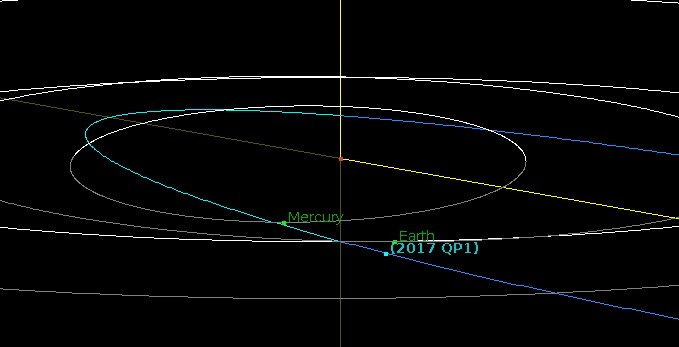 This object belongs to the Apollo group of asteroids. It's estimated diameter is between 37 and 83 m (121 and 272 feet).

For comparison, the Chelyabinsk meteorite that exploded some 28.7 km (18.5 miles) above the Russian city of Chelyabinsk on February 15, 2013 had an estimated size of approximately 20 m (65 feet). This object survived our atmosphere and its pieces were later found.

If we take 2017 QP1's smallest estimated size of 27 m (121 feet) and the same entry angle and composition, if would produce similar effects to those seen in the video below.

The 2013 Chelyabinsk meteorite damaged over 3 000 buildings and injured over 1 500 people (mostly by broken window glass).

This object's estimated diameter is between 4 and 9 km (2.4 and 5.6 miles) and although many known asteroids have passed by closer than this one, all of them were smaller asteroids.

"Florence is the largest asteroid to pass this close to our planet since the first near-Earth asteroid was discovered over a century ago," according to Paul Chodas of Center for NEO Studies.

At magnitude +9 in late August, Florence will be a relatively easy target for experienced observers at sites with dark skies. It won't be visible to the unaided eye but will become visible in small telescopes by late August.