At 15:00 JST on Friday, March 24, 2017, the Japan Meteorological Agency has issued an eruption warning for Bayonnaise Rocks (Beyonesu Rocks), a shallow submarine volcano in Izu archipelago, south of Tokyo. The last eruption of this volcano took place in 1970.

The warning was issued after a coast guard aircraft found that the color of the ocean surface in the area has changed, apparently due to volcanic activity. The volcano sits about 65 km (40 miles) SSE of Aogashima Island and 400 km (250 miles) south of Tokyo, in the south portion of the Izu archipelago, Japan.

An eruption is unlikely to seriously affect any of the inhabited islands, including Aogashima, but ships in the area might be affected. JMA said a change of color in the ocean near the volcano was last observed in 1988.

Most historical eruptions, recorded since the late-19th century, have occurred from the large post-caldera Myojinsho lava dome on the NE rim of the caldera.

On September 24, 1952, a sudden and powerful eruption at Myojinsho claimed lives of 31 people on a research vessel. 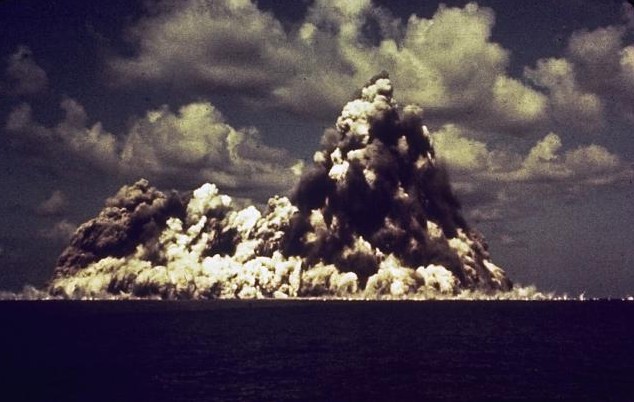 A submarine explosion at Myojinsho lava dome on the rim of Bayonnaise Rocks caldera in the central Izu Islands on September 23, 1952, displays both a vertically rising plume of ash and steam and a basal portion traveling horizontally across the sea surface. This photo was taken 8 seconds after the explosion first breached the surface. The eruption began on September 16, when a lava dome slowly rose above the sea surface. Explosion activity then intermittently destroyed the dome. This cycle continued three times until October 1953. Credit: Ryohei Morimoto, University of Tokyo.

Beyonesu Rocks represent part of the barely exposed rim of the largely submarine caldera. Formation of the 8 – 9 km wide caldera was followed by construction of a large (2.6 km3) lava dome and/or lava flow complex on the caldera floor, originally located at a depth of 1 000 – 1 100 m. Most historical eruptions, recorded since the late-19th century, have occurred from the large post-caldera Myojinsho lava dome on the NE rim of the caldera.

Deposits from submarine pyroclastic flows associated with growth of the dacitic lava dome mantle the conical dome and extend into the NE part of the caldera and down its outer slopes. An explosive submarine eruption from Myojinsho in 1952 destroyed a Japanese research vessel, killing all 31 on board. Submarine eruptions have also been observed from other points on the caldera rim and outside of the caldera. The Beyonesu Rocks were named after the French warship the Bayonnaise, which was surveying volcanic islands south of Tokyo Bay in 1850.

Featured image: Steam pours from the blocky summit of a lava dome formed at Myojin-sho during a submarine eruption at the Bayonnaise Rocks volcano in 1952. Image credit: Helen Foster, USGS