A bright green meteor streaked across the sky of Alabama and Mississippi around 11:48 UTC (06:48 CDT) on October 12, 2016. The event was seen from Texas to Kentucky.

The American Meteor Society (AMS) received over 290 reports by 18:20 UTC. Witnesses described glowing orange fragments seen while the Sun was rising and the sky was bright.

According to Bill Cooke with NASA's Meteoroid Environments Office in Huntsville, Alabama, the meteor was moving 143 200 km/h (89 000 mph) and was seen from Louisiana, Mississippi, Alabama, Tennessee, and Georgia.

Thanks to Dale in New Albany for sharing his dash cam vid of this morning's meteor. Here's a statement from @NASA https://t.co/eAGU7dXxgF pic.twitter.com/6rdFllA6bQ

"Unfortunately, all sky cameras in the region had already shut down to protect themselves from the bright Sun, forcing us to rely solely on the eyewitness reports for trajectory analysis," Cooke said.

"Based on these, we can say that the meteor was first seen 104 km (65 miles) above the town of Sawyersville in western Alabama It appears to have fragmented 66 km (41 miles) above Louisville, Mississippi."

Estimates of the brightness indicate that the object weighed about 2.3 kg (5 pounds) and was roughly 12.7 cm (5 inches) in diameter. Given the high uncertainty in the visual reports, a reliable orbit cannot be computed, so the source of this object remains a mystery at this time.

"However, we can definitely say it was a natural object (meteor) and was not associated with the Orionid meteor shower," Cooke concluded. 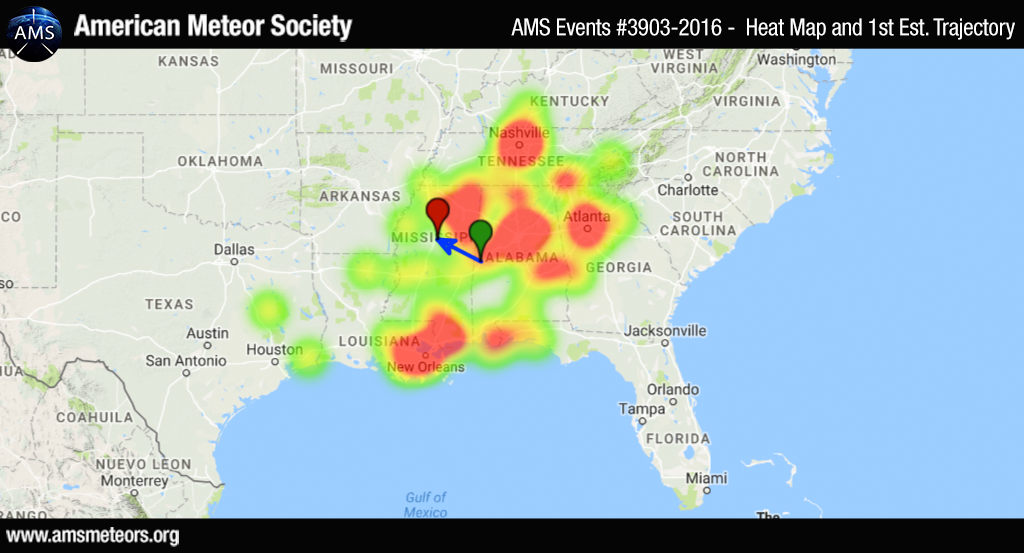