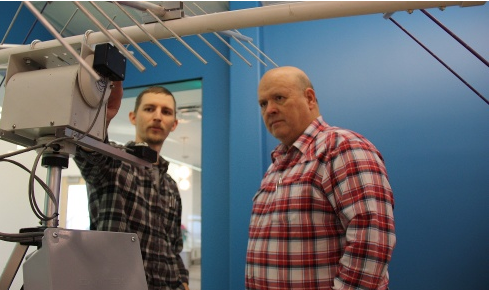 An amateur radio transponder is being prepared to be sent into geosynchronous orbit in 2017 to help, according to Virgina Tech News. Researchers at the Ted and Karyn Hume Center for National Security and Technology say that it will allow great development in communication.

"Seven days a week, 24 hours a day, 365 days a year, a new ham band will be available for the Americas," said Robert McGwier, a research professor in the Bradley Department of Electrical and Computer Engineering and the Hume Center's director of research. "It will allow rapid development to disaster areas and support long-haul communications for first responders."

The device would be the first amateur radio sent to a geosynchronous orbit, which would greatly enhance communication capabilities for other amateur radio operators, especially for disaster areas and emergency situations. The Hume Center team met with Federal Emergency Management Agency Administrator Craig Fugate in September in order to discuss the project. On the global scale, there is today more than 2 million amateur radio operators, the community has a long history in emergency communications assistance, in case traditional communications (Internet and cell towers for example) should fail at crisis areas. However, ham radio signal only requires compact equipment, which can be easily transported to an emergency site.

"Hams show up at every disaster, no matter what," said McGwier, referring to amateur radio operators. After events like Hurricane Katrina and Indian Ocean tsunami, "for days, the only way that people communicated out of those communities was amateur radio."

As matter of fact, Federal Emergency Management Agency (FEMA) did sign an agreement with American Radio Relay League (ARRL) back in 2014, which describes the cooperation between the two organisations in case of emergency situation, although it is Federal Communications Commission, who has the regulations to authorize the use of ham radios in situations where property and/or lives are in danger.

But the truth is, even ham radios are not always available.

There might a problem when a geomagentic storm strikes the planet because most of the amateur radio signals bounce off from ionosphere (part of the upper atmosphere) and, this can affect the efficiency of the signals, making them unpredictable. Instead of using "ionosphere bounce-off" signals, satellites would allow more efficient logistics – reliable access supplies, medical assistance and up-to-date situation changes. That is why geosynchronous orbit is critical in such situations. It needs to be made sure that satellite would be accessible for radio operators.

In favor of geosynchronous orbit "talks" also the fact that it has the same rotation as the Earth's – few minutes under 24 hours. Satellite on geosynchronous orbit is easy to locate and access. In this case, the satellite will be accessible for amateur radio operators in Americas, including the students and researchers at the Virgina Tech Ground Station because the satellite will always be within the band of American longitudes.

The satellite will be operated from Millenium Space Systems (MSS) on behalf of the US Air Forces and AMSAT (Radio Amateur Satellite Corporation) will operate the radio. The design is being made by Virgina Tech Students – therefore, the project is a unique collaboration between the university, nonprofit organisations, private companies and the federal government.

The team at Hume Center also engineers a ground terminal that could be used by emergency personnel, in order to relay their communications through the satellite. The setup could be deployed through ARRL and AMSAT, being the critical connection in national emergency response system, which allows trained operators to mobilize to disaster areas in hours after the disastrous event has occurred.