A team of scientists from the Providence College, Roger Williams University, the University of South Florida, Stanford University and the University of Oregon have studied sophisticated, multi-jet propulsion system of marine animals known as siphonophores. The research results were published in the Nature Communications journal, National Science Foundation (NSF) reported on October 7, 2015 and may provide oceanographic community with interesting views on how to design a future undersea exploration vehicle.

Scientists have focused their studies on a species Nanomia bijuga, a group of colonial animals called physonect siphonophores, that are related to jellyfish, anemones and corals. These animals migrate to the ocean's surface at night to find prey and then move back into ocean depths to avoid predators. 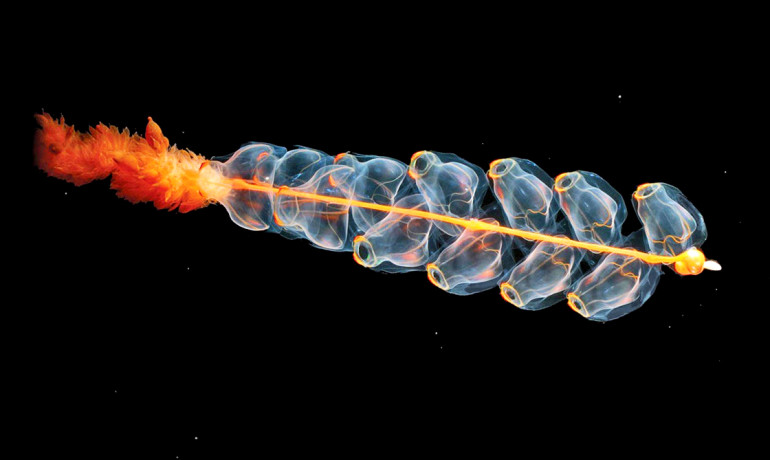 A siphonophore, an animal with colonies of propulsion jets, gliding through the sea. Image credit: Kevin Raskoff/Wikimedia Commons

Physonect siphonophores appear to be a single organism, but in fact comprise of colonies of many individual long, thin and transparent floaters, where each one has its own role in moving the structure as a whole, in this case in turning or forward-thrusting. The moving structure is about 40 to 49 m (130 to 160 feet) long which puts it among the longest animals in the world.

What is so amazing about these marine animals is that they swim via coordinated multiple jet propulsion, where each individual has its own role in transporting the colony vehicle, marine biologist Jack Costello of Providence College explained.

The scientists discovered that N. bijuga uses a sophisticated, multi-jet propulsion system that's based on a division of labor between younger and older members of the colony. 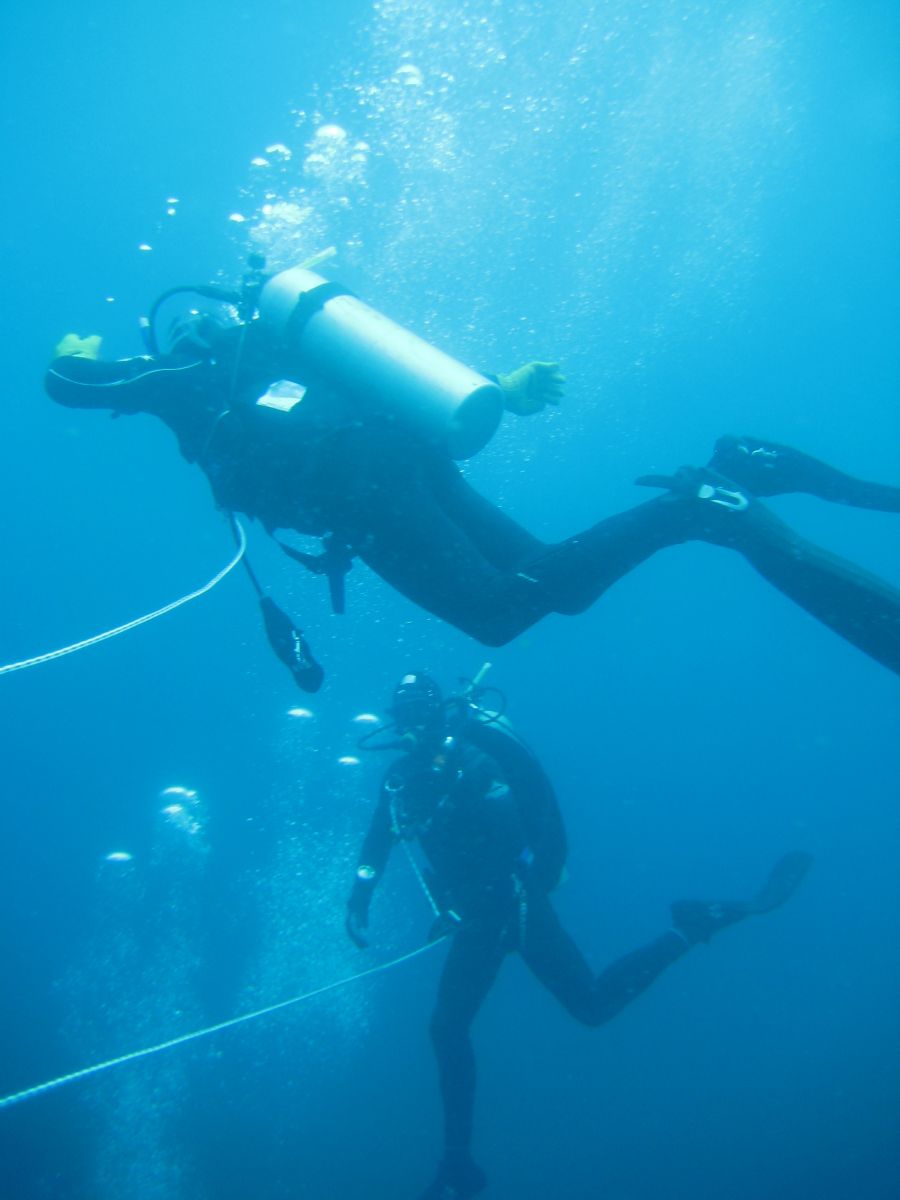 "These investigators have given us some of the first information about how this complex colonial organism coordinates its swimming activity," said David Garrison, program director in the National Science Foundation's (NSF) Division of Ocean Sciences, which supported the research.

"This siphonophore is a highly efficient system in which no developmental stage is wasted. The young members at the front of the colony use their smaller jets for turning and steering. The older, larger members farther back provide more powerful thrust as the colony moves from place to place. It's a sophisticated design in what would initially seem like a simple organism," Costello explained. 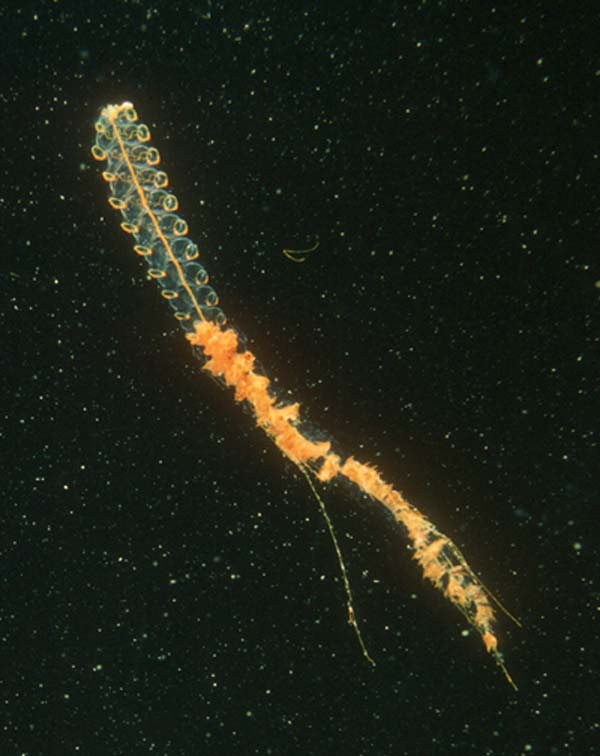 Nectophores are genetically identical clones arranged into a few centimeters long nectosome. The nectosome are then towed into much longer groups of reproductive and feeding units across distances of over 198 m (650 feet) each day. According to Costello, this motion can be compared to an adult human running a marathon every day, while towing the equivalent of its own body mass behind it.

To analyze N. bijuga's swimming abilities, Costello and colleagues measured particle flows around the siphonophore as it moved. The results revealed the size and thrust of individual jets.

It turns out the youngest ones pushed the least amounts of water. However, because they're located at the tip of the nectosome, far from where it connects with the rest of the siphonophore's body, a directed force by these young members has an outsized effect on rotating the whole colony. 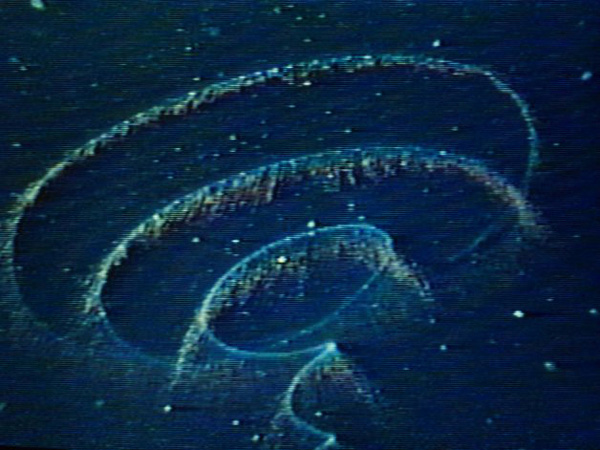 "These younger members have a long lever arm. They're like handles on doors. If you push a door near its hinges, the door is hard to open. But if you push on a door's handle, the door opens easily. A little force from a big lever arm has a big effect on turning, and so it is with this siphonophore," Costello said.

The young colony members allow N. bijuga to rapidly alter course–and to completely reverse its swimming direction. As new nectophores bud at the tip of the nectosome, older ones move farther back where their larger contractions are important for thrust. In this way every member of the colony helps with maneuvering the 'vehicle'.

The pattern offers insights into the biomechanical success of siphonophores and provides "a basic understanding of a natural solution to multi-engine organization that may contribute to the expanding field of underwater-distributed propulsion vehicle design," write the scientists in their paper.

Costello imagines an undersea exploration vehicle that, like N.bijuga, twirls through the depths using elegantly placed thrusters that extend from front to back. "We can perhaps peer into our own future in the sea by studying how this seemingly simple animal jets from one part of the ocean to another relying on its youngest crew members."

Featured image: A siphonophore, an animal with colonies of propulsion jets, gliding through the sea. Image credit: Kevin Raskoff/Wikimedia Commons