As far as tropical storms and hurricanes are concerned we had a quiet July in the Atlantic. However, the forecast calls for a total of 12 tropical storms, five named hurricanes and two major hurricanes.
With the number of named tropical storms and hurricanes so far this season factored in, there should be eight additional tropical storms, four of which will become hurricanes, through the rest of the hurricane season. Of those four hurricanes, two could strengthen into major hurricanes, Category 3 or higher according to AccuWeather forecasters.The middle of August through the middle of September is forecasted to become more active with an uptick in the number of named storms. It is still the normal peak time of the Atlantic hurricane season. A gradual fading of the season will occur during October, depending on how fast and strong El Niño comes on.

The remnants of Tropical Depression 7 is located over northern Guatemala, Belize and the Yucatan peninsula. The disturbance is producing disorganized showers and thunderstorms over the far northwestern Caribbean sea, the Yucatan peninsula and portions of Central America. This system has a low chance of becoming a tropical cyclone during the next 48 hours as it moves west-northwestward across Guatemala and southeastern Mexico. However, locally heavy rains will be possible across portions of Central America and southern Mexico during Thursday. 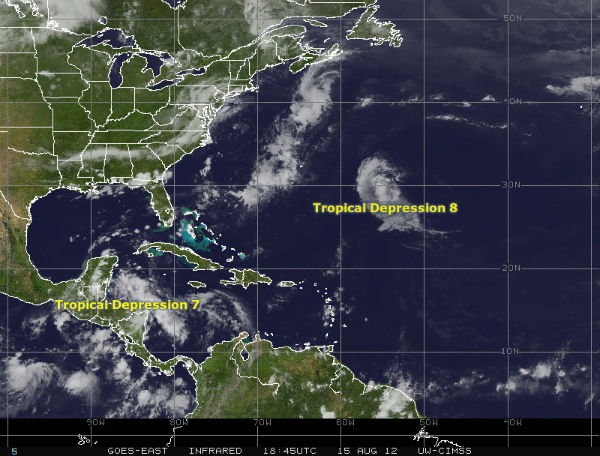 Signs of increased thunderstorm activity indicate that the system of low pressure, located about 700 miles east-southeast of Bermuda, is strengthening. The area has become better defined over the past 12-24 hours and has a high probability of becoming the eighth organized tropical system of the Atlantic hurricane season according to AccuWeather. Warm waters and low wind shear could help this low pressure area to organize into a tropical depression. The system may strengthen enough to become the seventh named storm of the season – Gordon. The system emerged off the African coast last weekend, plagued with dry air and dust from the Sahara Desert which limited it development.

According to latest public advisory issued by US National Hurricane Center at 21:00 UTC on August 15, the center of Tropical Depression 8 was located near latitude 29.9N and longitude 55.1W and it was moving northward at speed of 30 km/h (18 mph). This general motion is expected to continue followed by a gradual turn toward the northeast and the east-northeast on Thursday. Maximum sustained winds are near 55 km/h (35 mph) with higher gusts. Some strengthening is forecast during the next 48 hours. This depression could become a tropical storm later tonight or on Thursday.

Forecast models show that the system will take on a more due northerly track late Wednesday and Thursday as it progresses around a dome of high pressure to the east. This path would keep the system well east of Bermuda, away from land. Later Thursday into Friday, this high pressure dome will weaken, and the system will be picked up by a prevailing westerly wind that will guide it towards the Azores by Sunday into early Monday. At that time, the system will encounter cooler ocean waters and lose tropical characteristics as it continues toward Europe.