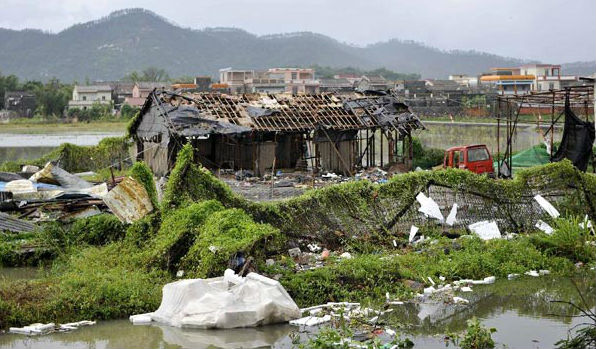 Typhoon Vicente made landfall on July 23, 2012 UTC about 131 km south-west of Hong Kong as a Category 3 typhoon in Taishan, Guangdong, China, with maximum sustained winds of about 120 mph. Vicente missed the Hong Kong and Macau, the two populous cities in South China. Vicente was a small storm with a radius to wind speeds of 40 to 45 kms, hence a significant portion of the wind damage was contained within the landfall region.

Vicente is the eighth named tropical storm and the fifth typhoon of the 2012 West Pacific Typhoon season. The Hong Kong Observatory (HKO) issued the “hurricane signal, No 10” for Vicente, the first since Typhoon York (1999). Vicente became a named storm on July 21 while it was churning in the South China Sea. On July 23 the storm intensified to become a Category 1 typhoon. Due to low vertical wind shear and high seas surface temperatures, conditions conducive to storm intensification, Vicente rapidly intensified near the Pearl River Delta and became a category 4 typhoon. Before making landfall Vicente weakened to a Category 3 typhoon.

Three people were killed and six went missing in disasters caused by Typhoon Vicente which made landfall early Tuesday morning over the city of Taishan. Total rainfall accumulated in the affected area was 300-350 mm with a rain rate of 25-35 mm/hour. Significant rainfall was reported in Macau as well.

The strongest tropical storm to hit China so far this year will bring heavy rains to most parts of south China over the next three days and precipitation will exceed 50 millimeters there. Parts of Guangdong, Guangxi and Hainan could see rainfall of 200 to 350 millimeters. Moderate to heavy rains are expected to hit the central and northern parts of north and northeast China from Wednesday to Friday, according to the National Meteorological Center (NMC).

Meanwhile, parts of Beijing, Tianjin, Hebei, Shanxi, Heilongjiang and Jilin will see torrential rains. Meteorologists said the new round of rainstorms will be less intense compared to those over the weekend, but the previously affected areas could receive rainfall of more than 50 mm. 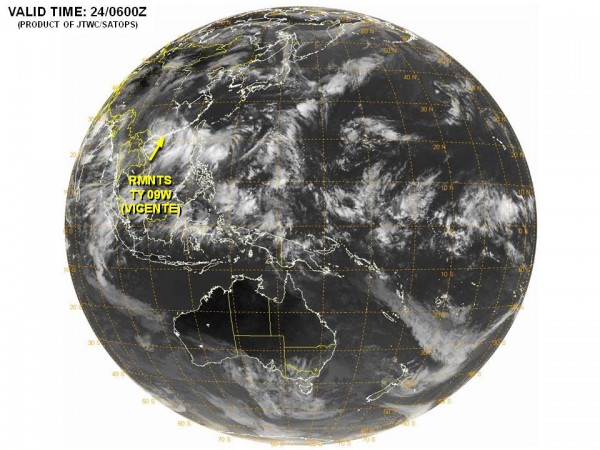 Rainstorms have ravaged many parts of China, including the capital city where the heaviest rain in 60 years caused 37 deaths. Torrential rain has swept through 17 provincial areas since July 20, leaving 95 dead and another 45 missing. Heavy rains are also expected in southern and southwestern China, as tropical storm Vicente nears the country’s southern coast.