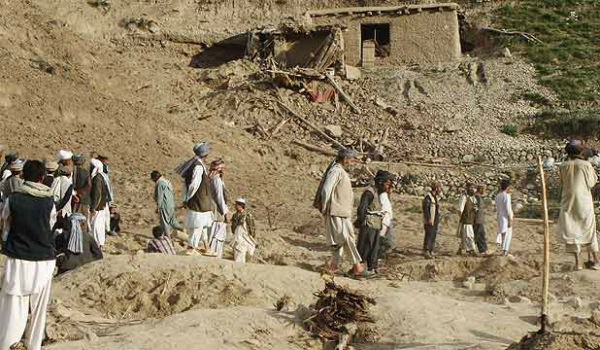 Two strong earthquakes hit highly populated region of Baghlan in Afghanistan on June 11, 2012. First earthquake measuring magnitude 5.4 happened at 05:02:17 UTC and it was located 169km north from Kabul (36.048°N, 69.302°E) at depth of 15 km (9.3 miles). Only 27 minutes later, a stronger 5.7 magnitude quake occured 174 km north of Kabul (36.082°N, 69.316°E) at depth of 15 km (9.3 miles). Neither of these events would normally be expected to cause substantial damage, given their size and depth, but Afghanistan is desperately poor and highly vulnerable to the effects of earthquakes.  In addition, the landscape is landslide-prone during seismic events. 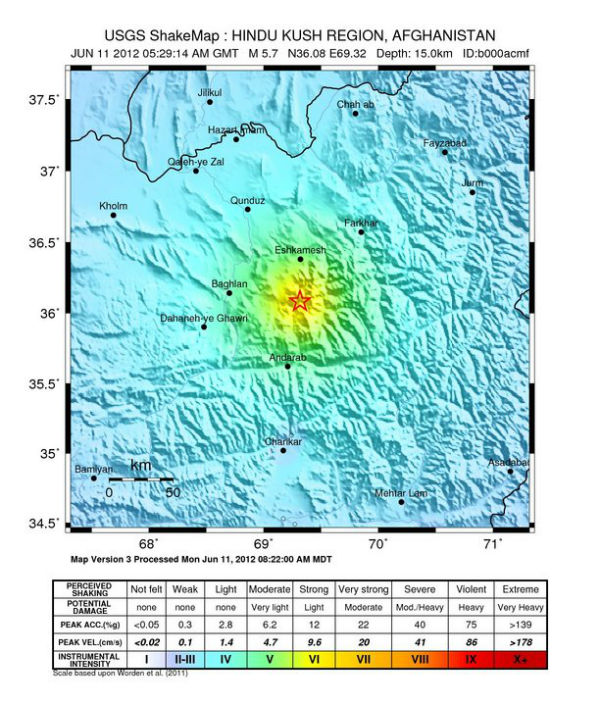 USGS gave Yellow alert for estimated fatalities with 34% estimates of fatalities. Early reports of landslides in the area indicate that some landslide-related casualties are likely. Afghanistan officials said on Monday that some 100 people were trapped in rubble after mud houses collapsed from two strong earthquakes. More than 20 houses have been buried in a landslide. Landslides generated by earthquakes typically cause many deaths. Similar earthquakes in the past have also been devastating and caused a lot of fatalities.

A massive landslide of mud and rocks buried houses so deep in the remote mountain village of Sayi Hazara that rescuers gave up trying to use shovels to dig through the buried buildings, said Jawed Basharat, a spokesman for the provincial police chief who was part of a team that examined the village after the slide. There were no visible signs of the buildings underneath.

50 deaths and 150 injuries were seen from a 2002 earthquake occurring very close to the present epicenter with Mw5.8. Almost 1200 fatalities were also seen from the 25 March 2002 event. United Nations figures estimated approximately 1,200 fatalities in the Nahrin region with at least 100 deaths in the town of Nahrin itself. Another 7,000 people were injured and more than 20,000 were rendered homeless. Many of the injured were flown out by helicopter to the neighbouring towns of Baghlan and Pol-e Khomri. 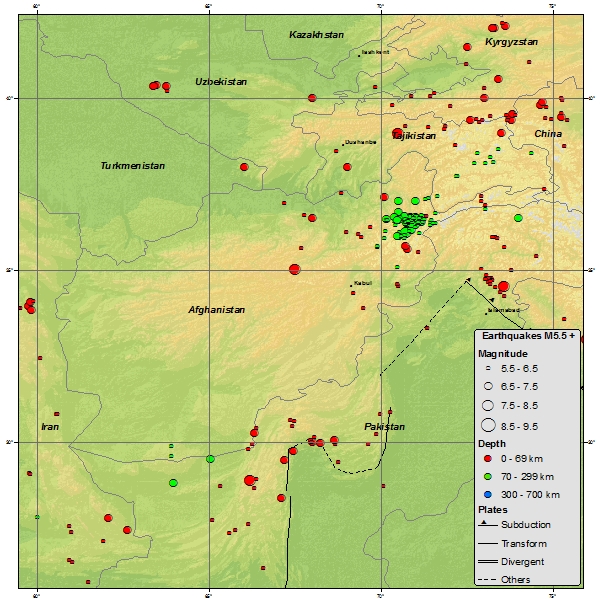 The CATDAT Damaging Earthquakes Database has seen over 16 damaging earthquakes within 100km of the epicenter since 1900. An earthquake in 1972 in Baghlan of Mw6.4, a destructive earthquake in north Afghanistan, destroyed approximately 7,000 houses, killing 450 and injuring 3,000 people in the Baghlan district. The shock caused serious damage and loss of life in tcoal mines of the district. The earthquake was felt as far as Tashkent, Murgab and Tarbela, radius of 520 km.