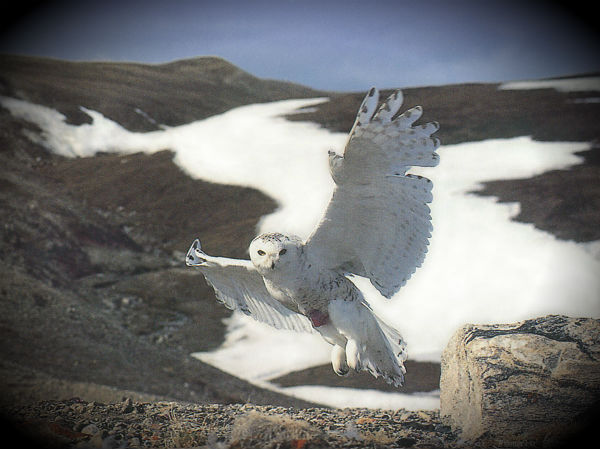 Thousands of snowy owls from the Arctic have been spotted from coast to coast, in Idaho, Montana,  Missouri and Massachusetts. Owl experts say the phenomenon is likely linked to lemmings, a rodent that accounts for 90 percent of the diet of snowy owls during breeding months that stretch from May into September. The largely nocturnal birds also prey on a host of other animals, from voles to geese. An especially plentiful supply of lemmings last season likely led to a population boom among owls that resulted in each breeding pair hatching as many as seven offspring.  In January 2009, a snowy owl appeared in Spring Hill, Tennessee, the first reported sighting in the state since 1987.

“What we’re seeing now — it’s unbelievable! This is the most significant wildlife event in decades!” Denver Holt, head of the Owl Research Institute in Montana.

This year, competition for food in the Far North became serious. Snowy owl populations are believed to be in an overall decline, possibly because a changing climate has lessened the abundance of vegetation like grasses that lemmings rely on. Research on the animals is scarce because of the remoteness and extreme conditions of the terrain the owls occupy, including northern Russia and Scandinavia, An owl landed at an airport in Hawaii in November but was shot and killed to avoid collisions with planes. This winter’s snowy owl outbreak, with multiple sightings as far south as Oklahoma, puzzled scientific community. (TheExtinctionProtocol)

Some of the owls migrate regularly, and some remain year-round in their northern breeding grounds, but wildlife experts have noticed a larger than usual migration this winter that extends to places thousands of miles away. In Missouri, more than 50 have been spotted. The previous high for the state was 13. The birds — a male and a female — were seen in the area Jan. 11 to Jan. 18, but since then, no sightings have been reported. It’s unclear whether the owls have moved on. Wildlife experts hope this won’t be the last they see of these birds. (STLToday)

Snowy Owls nest in the Arctic tundra of the northernmost stretches of Alaska, Canada and Eurasia. They winter south through Canada and northern Eurasia, with irruptions occurring further south in some years. Snowy Owls are attracted to open areas like coastal dunes and prairies that appear somewhat similar to tundra. They have been reported as far south as the American states of Texas, Georgia, the American Gulf states, southernmost Russia, northern China and even the Caribbean.