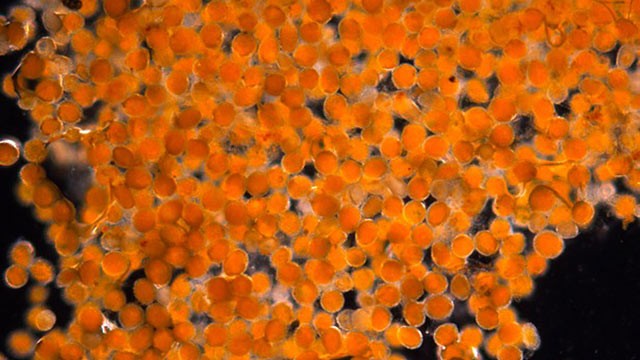 But the mystery is not quite solved. Officials with the National Oceanic and Atmospheric Administration said Monday they don’t know for sure what species the eggs are, although they believe they are some kind of crustacean eggs or embryos. The material is sticky, but becomes a powder when dried, said Julie Speegle, a spokeswoman for NOAA’s Fisheries Service in Alaska. They also don’t know if the eggs are toxic, and that worries many of the 374 residents of Kivalina, an Inupiat Eskimo community located at the tip of an 8-mile barrier reef on Alaska’s northwest coast.

“We now think these are some sort of small crustacean egg or embryo, with a lipid oil droplet in the middle causing the orange color,” said Jeep Rice, a lead NOAA scientist at the Juneau lab. “So this is natural. It is not chemical pollution; it is not a man-made substance. It was easy to see cellular structure surrounding the lipid droplet, and to identify this as ‘animal’,” said Rice. “We have determined these are small invertebrate eggs, although we cannot tell which species.“

He said the lab in Anchorage isn’t as much set up for “marine CSI” for chemicals, thus the sample was sent here. Diagnosing the stuff as natural was an easy task once it arrived. 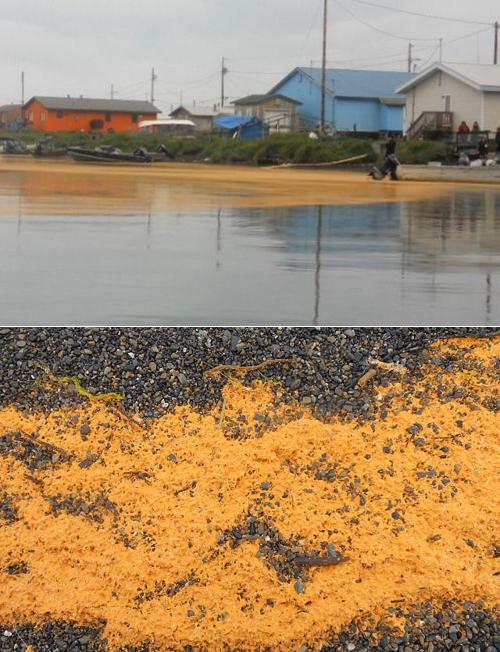 There’s been at least one report of dead minnows found in the lagoon of the village the night the eggs appeared last week. Residents also are worried about the community’s dwindling reserves in village water tanks even though the orange mass has dissipated from the lagoon and Wulik River, said city administrator Janet Mitchell. Scientists also don’t know why the unidentified eggs suddenly emerged on the shores of Kivalina last week. Villagers say they’ve never seen such a phenomenon before.

“We’ll probably find some clues, but we’ll likely never have a definitive answer on that,” NOAA spokeswoman Julie Speegle said.

Samples are being sent to a NOAA laboratory in Charleston, S.C., for further analysis. The Alaska Department of Environmental Conservation also sent samples Monday to the Institute for Marine Science at the University of Alaska Fairbanks.

Kivalina residents live largely off the land, and many are worried about the effect on some wildlife and plants from the goo, which turned powdery once it dried — and probably went airborne. Mitchell said some people went berry picking over the weekend, but couldn’t tell if the goo was on the fruit, called salmonberries, which are the same color of the eggs. The caribou are in the region now, but she doesn’t believe the migrating animals pose much risk as a food source.

The eggs were found on at least one roof and in buckets set all over the village to collect rain water. City Councilwoman Frances Douglas said the gooey, slimy substance was widely spread in streaks along the Wulik River and the lagoon, which is a half mile wide and six miles long. Orangey water was reported from as far away as the village of Buckland, 150 miles southeast of Kivalina. Douglas estimated the volume of eggs she could see “in excess of a thousand gallons, easily.”

In many groups of crustaceans, the fertilised eggs are simply released into the water column, while others have developed a number of mechanisms for holding on to the eggs until they are ready to hatch. Most decapods carry the eggs attached to the pleopods, while peracarids, notostracans, anostracans, and many isopods form a brood pouch from the carapace and thoracic limbs. Female Branchiura do not carry eggs in external ovisacs but attach them in rows to rocks and other objects.Most leptostracans and krill carry the eggs between their thoracic limbs; some copepods carry their eggs in special thin-walled sacs, while others have them attached together in long, tangled strings.