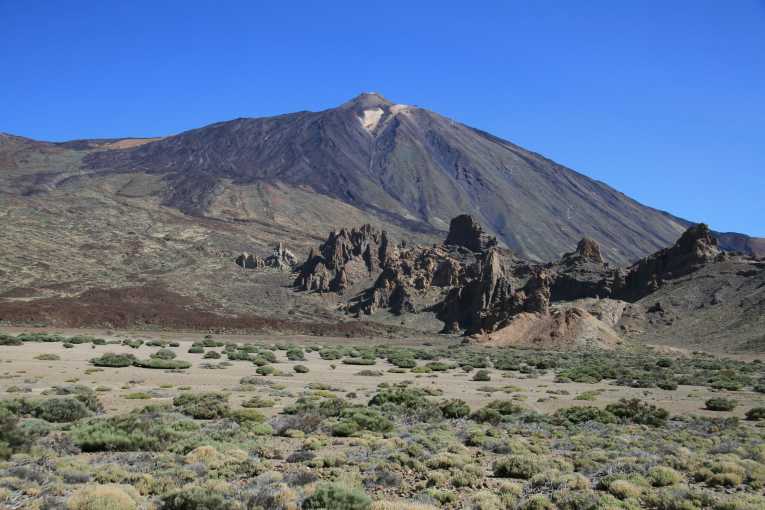 Scientists are now warning that volcanoes in Western Victoria and South Australia are due to erupt. The prediction comes just hours after two earthquakes hit the state this morning.

Using new dating techniques, University of Melbourne scientists have found that the volcanoes usually erupt every 2000 years, with the last eruption at Mt Gambier, South Australia, 5000 years ago. It comes as Victorians are warned to brace themselves for more tremors after a shallow magnitude quake hit at 11.32am, sending shockwaves through towns and suburbs more than 100 kilometres away. A series of tremors lasting up to 15 seconds have been felt across Melbourne’s CBD and southeastern suburbs. A second, smaller quake shook Korumburra, with reports it was again felt in Melbourne, at 12.37pm

Some Victorians say their houses shook violently for about 10 seconds, and many reported hearing the earth rumble. Experts say the quake struck 8 kilometres underground, and said the epicentre was about 7km west of Korumburra.  So far, there are no reports of any major damage, except hairline cracks in some peoples’ homes. The area in Gippsland is prone to small earthquakes, with a number of tremors measuring between 1.8 and 4.6 originating in the same area in March and May 2009. (7News) 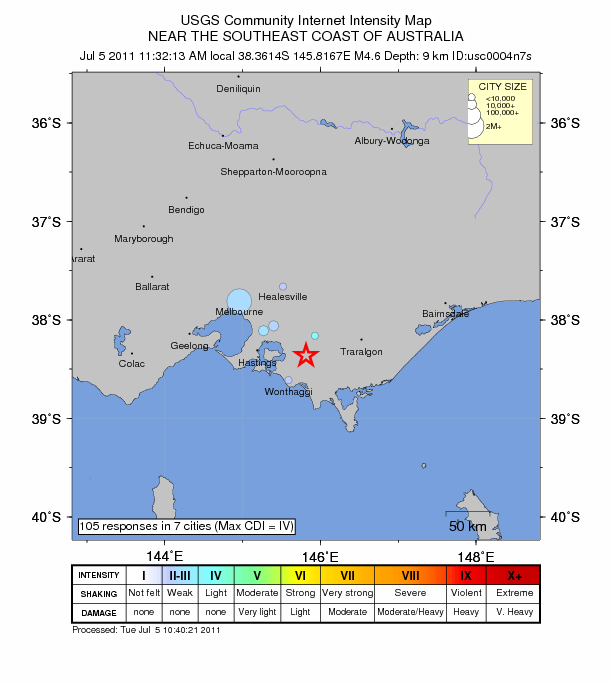 Australia is found within the Indo-Australian tectonic plate. Most seismic activity in the region occurs at the boundaries of this plate with adjoining plates. This is called inter-plate seismicity. However, a significant amount of earthquake activity occurs within the plate – both under the continent, and under the surrounding oceanic areas. This is called intra-plate activity, and the reasons for this kind of seismicity are not clearly understood. Earthquakes to the east and north of Australia are at destructive plate boundaries, where subduction of the sea floor is occurring. Australia is moving to the north north east at approximately 10 cm per year, hence the many earthquakes at the collision zone with the plates to the north of Australia. (USGS)

Earthquakes can occur in almost every part of Australia, although certain regions have a higher likelihood of experiencing an earthquake than others. Possibly the most earthquake prone regions of Australia are the West Australian wheatbelt, and the Flinders Ranges of South Australia. The alpine region of eastern Australia is also relatively active. Three Australian earthquakes are known to have caused fatalities. The 1902 earthquake near Warooka, on the Yorke Peninsula of South Australia (mag 6.0), caused two deaths, attributed to heart attacks. The 1935 Gayndah earthquake in Queensland caused one death. By far the most significant was the 1989 earthquake at Newcastle, NSW (mag 5.6), which caused 13 fatalities, mostly because of the catastrophic structural collapse of the Newcastle Worker’s Club. 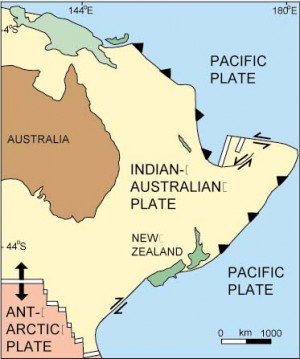 Plate tectonic boundaries of the southwest Pacific. Australia is far from the edges of the Indian-Australia plate yet volcanoes have been erupting along the east part of the continent for the last 33 million years. Australia’s volcanoes are not related to the subduction zones that produce volcanoes in New Zealand, the Kermadec Islands, Tonga, Samoa, and Indonesia. The “teeth” (black triangles) are on the over-riding plate at each subduction zone. Spreading centers are marked by divergent arrows. Transform faults marked by opposed arrows.

The volcanoes of Australia define several chains with progressively younger volcanoes to the south. Unlike the Hawaiian, Society Islands and Yellowstone hot spots, which produce a single chain of volcanoes, the hot spot beneath eastern Australia is broad and may take advantage of weak places in the plate to feed magma to the surface. The volcanoes extend 4400 km from Maer Islands (500 km north of Queensland) in the north to Tasmania in the south. The Australian plate is moving north at about 75 km/million years or 7.5 cm/year. (…)

Volcanoes have shaped Victoria’s landscape throughout its geological history. Over the last 4 million years a large volcanic plain has formed which stretches from Melbourne westwards across the state and into South Australia. It contains approxmately 400 eruption points with the youngest site approximately 7500 years old. There are many excellent examples of eruption styles including shield, scoria and maar volcanoes. Volcanoes in Victoria by Dr Bill Birch is a good publication which looks at volcanoes from the Cambrian through to Recent times in Victoria. This publication is available from the Museum Shop or through the Royal S0ciety of Victoria.(MuseumVictoria) 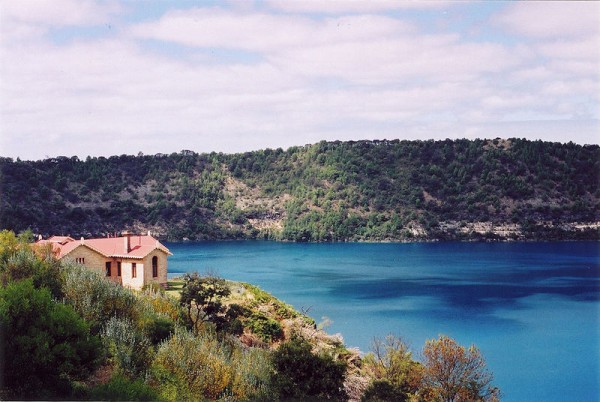 Volcanoes in eastern Australia that have not erupted in thousands of years still pose a threat and emergency services should be better prepared. There has been no volcanic activity in Australia in the past few hundred years, and no major eruption since Mt Gambier, on the border of South Australia and Victoria, 4500 years ago.

But a sudden eruption could still catch emergency authorities unprepared for the floods, mud flows and ash falls that could follow. The kind of eruption Australia could expect was not on the same scale of the Mt Helen’s eruption, which wiped out a large area in the U.S. state of Washington in May 1980. Australia could expect a smaller eruption. 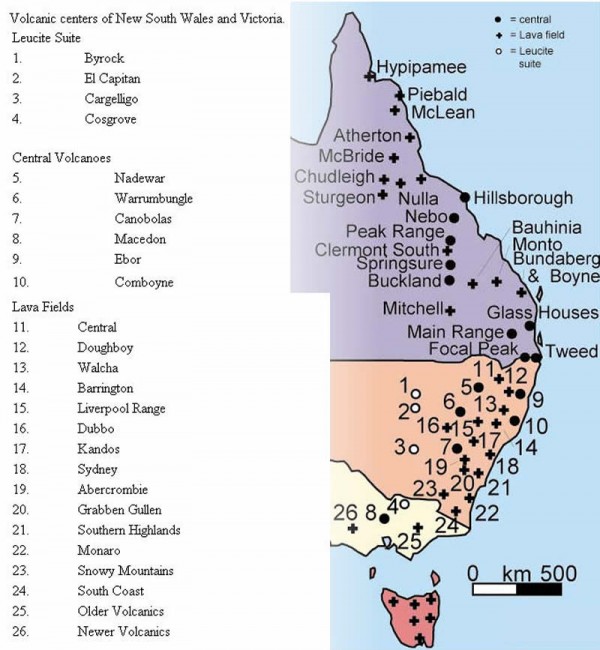 An eruption could either be an explosion like the one at Mt Gambier, creating a big hole in the ground, or avolcanic eruption common in Queensland and Victoria in the past 50,000 years of a different type. These eruptions have large lava flows followed by a more gaseous eruption where the lava breaks up into small pieces and builds a cone of cinders and sharp rock material. There is evidence of these cones and crater lakes around Victoria and northern Queensland.

Eastern Australia had up to 20 volcanoes less than 50,000 years old, said Joyce, who said probability showed these still posed a threat. The consequences of even a small eruption coming into contact with groundwater could include hot, wet ash falls, dangerous gases and ash blown into the air, damage to animals and the environment, and pollution in water systems.

Advance warnings could include an increase in seismic activity, a change in the temperature of surface soils, or even smoking fumaroles, small eruptions from the side of a volcano that indicate that a major eruption was imminent. (ABCnet)

The voluminous Newer Volcanics province covers a broad 15,000 sq km area of SE Australia with nearly 400 small shield volcanoes and explosive vents of Tertiary-to-Holocene age. Volumetrically the vast proportion of volcanic products consist of flat-lying lava flows, although the most prominent features of the volcanic field are the numerous small scoria cones, tuff rings, and maars that rise above the lava plain. Several vents were active during the Holocene; another vent (Mount Tower) is now considered to be of late-Pleistocene age. Late-Pleistocene to Holocene eruptions are characterized by small volume and low explosivity, forming a series of scoria cones, maars, tuff rings, and major valley filling lava flows. The youngest dated eruptions took place at Mount Schank and Mount Gambier about 5000 years ago, when explosive activity formed several maars and associated lava flows. (GlobalVolcanismProgram)