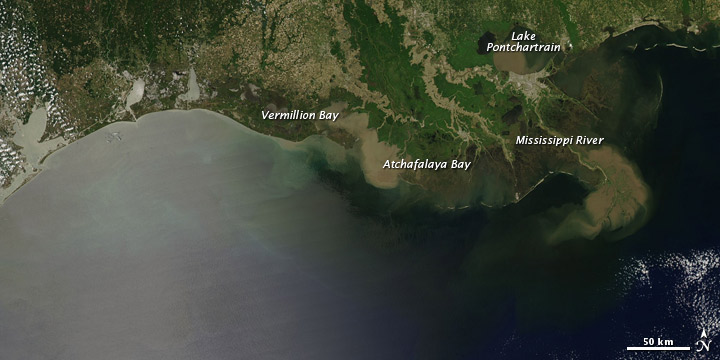 Besides inundating floodplains, agricultural fields, and homes, the flooded Mississippi and Atchafalaya Rivers delivered huge sediment loads to the Gulf of Mexico in the spring of 2011. At least some of that sediment could be seen from space.
The Moderate Resolution Imaging Spectroradiometer (MODIS) on NASA’s Aqua satellite captured first image on May 17, 2011, roughly when the first pulse of sediment arrived in the Gulf. The second image is from May 22, 2011. Sediment varies in color from tan to green, and is most apparent around the Mississippi Delta and the Atchafalaya Bay. 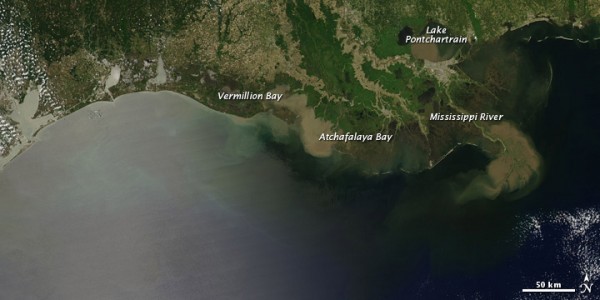 The Morganza Floodway was opened on May 14 to ease flooding on the Mississippi River by diverting some water through the Atchafalaya River channel. Peak discharge through the floodway occurred from May 18 to 22. Despite some cloud cover on May 22, spreading sediment is clearly visible in the Gulf of Mexico, especially west of Vermillion Bay. Each year, the Gulf of Mexico experiences low-oxygen conditions, or hypoxia, that can lead to substantial marine-life loss. Hypoxia is caused by excessive water-borne nutrients (particularly nitrogen), which mostly arise from fertilizer use on farms and lawns. 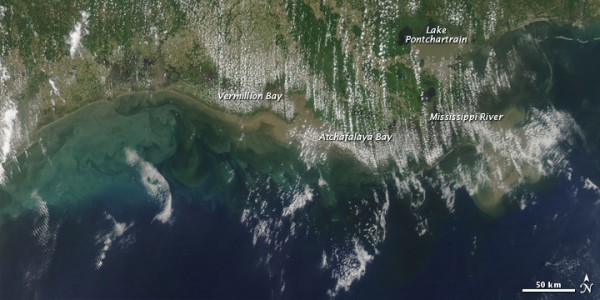 Known as a dead zone, the hypoxic area in the Gulf of Mexico is not new, but flooding in 2011 was expected to make it worse than usual. In mid-June, a team of NOAA-supported scientists announced that spring flooding could lead to the largest dead zone in the Gulf of Mexico since mapping began in 1985. The average dead zone size over the past five years has been 6,000 square miles. In 2011, the researchers said, the area could measure from 8,500 to 9,421 square miles.

Major flooding on the Mississippi river predicted to cause largest Gulf of Mexico dead zone ever recorded.