The European Space AGency's (ESA) Trace Gas Orbiter (TGO) has detected an unusual green glow for the first time in the atmosphere of Mars. According to the new study, the bright emission has been predicted to exist at Mars for around 40 years.

"One of the brightest emissions seen on Earth stems from night glow. More specifically, from oxygen atoms emitting a particular wavelength of light that has never been seen around another planet," said lead author Jean-Claude Gerard of the University of Liège in Belgium.

"However, this emission has been predicted to exist at Mars for around 40 years– and, thanks to TGO, we’ve found it."

Gerard and his team were able to spot the emission using TGO's special observing mode– the Nadir and Occultation for Mars Discovery (NOMAD) and the ultraviolet and visible spectrometer (UVIS).

"Previous observations hadn’t captured any kind of green glow at Mars, so we decided to reorient the UVIS nadir channel to point at the ‘edge’ of Mars, similar to the perspective you see in images of Earth taken from the ISS," explained co-author Ann Clarine Vandaele from the Royal Belgian Institute for Space Aeronomy. She is also the principal investigator of NOMAD.

The team used NOMAD-UVIS between April 24 and December 1, 2019, to scan altitudes ranging from 20 to 400 km (12 to 250 miles) from the Martian surface, twice per orbit. They found the green oxygen emission when they studied the datasets.

"The emission was strongest at an altitude of around 80 km (50 miles) and varied depending on the changing distance between Mars and the Sun," Vandaele added.

Studying the glow of planetary atmospheres can provide information about the dynamics and composition of an atmosphere, as well as reveal how energy is deposited by the Sun's light and solar wind.

"We modeled this emission and found that it’s mostly produced as carbon dioxide, or CO2, is broken up into its constituent parts: carbon monoxide and oxygen," Gerard stated. "We saw the resulting oxygen atoms glowing in both visible and ultraviolet light." 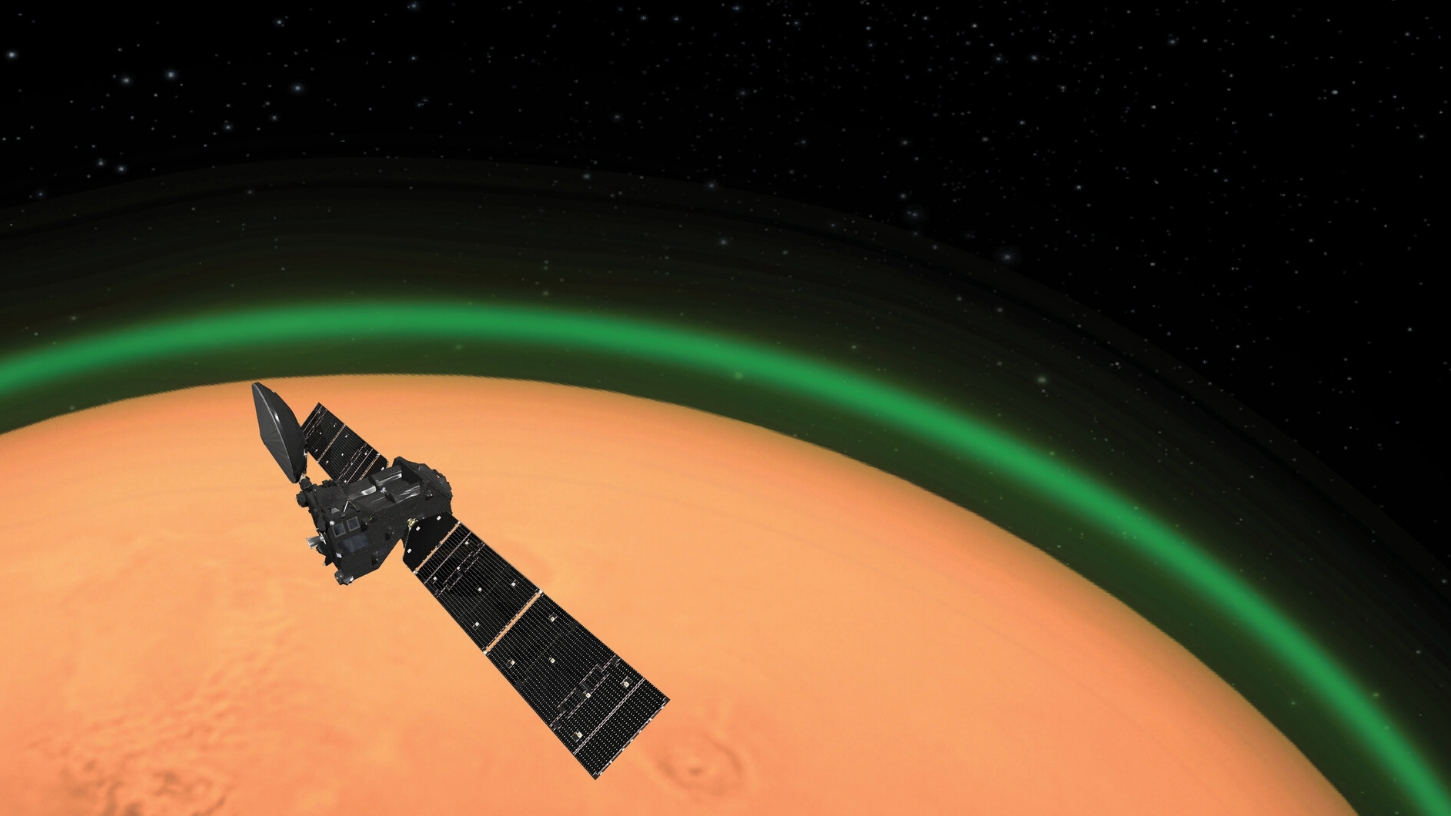 Comparing the two kinds of emission simultaneously showed that the observable glow was 16.5 more intense than the ultraviolet.

"The observations at Mars agree with previous theoretical models but not with the actual glowing we’ve spotted around Earth, where the visible emission is far weaker," Gerard added.

"This suggests we have more to learn about how oxygen atoms behave, which is hugely important for our understanding of atomic and quantum physics."

This understanding is key to identifying planetary atmospheres and related phenomena, like auroras.

By interpreting the structure and behavior of the green emission on Mars' atmosphere, scientists can acquire insights into an altitude range that has remained widely unexplored, and track how it changes the Sun's activity varies and Mars travels along its orbit around our star.

"This is the first time this important emission has ever been observed around another planet beyond Earth and marks the first scientific publication based on observations from the UVIS channel of the NOMAD instrument on the ExoMars Trace Gas Orbiter," said Hakan Svedhem, ESA's TGO project scientist.

"It demonstrates the remarkably high sensitivity and optical quality of the NOMAD instrument. This is especially true given that this study explored the dayside of Mars, which is much brighter than the nightside, thus making it even more difficult to spot this faint emission." 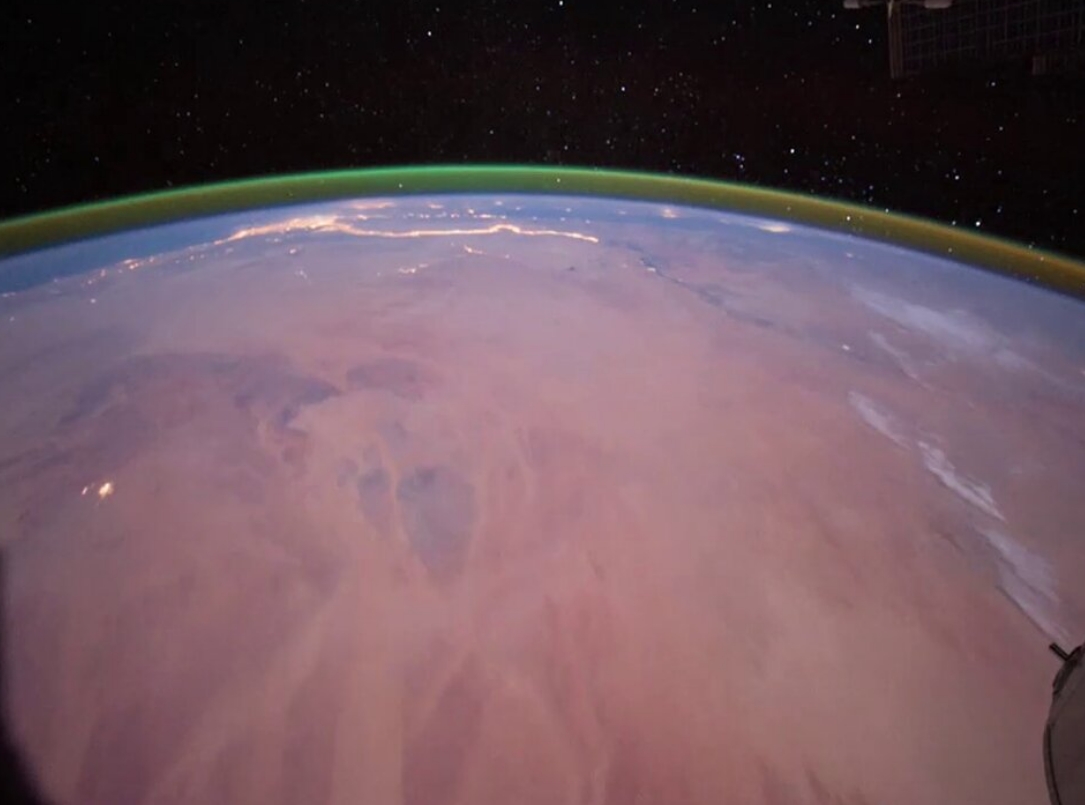 Hakan added, "This type of remote-sensing observation, coupled with in situ measurements at higher altitudes, helps us to predict how the martian atmosphere will respond to seasonal changes and variations in solar activity."

"Predicting changes in atmospheric density is especially important for forthcoming missions, including the ExoMars 2022 mission that will send a rover and surface science platform to explore the surface of the red planet."

The oxygen emission at 557.7 nm is a ubiquitous component of the spectrum of the terrestrial polar aurora and the reason for its usual green colour1. It is also observed as a thin layer of the glow surrounding the Earth near 90 km altitude in the dayside atmosphere2,3 but it has so far eluded detection in other planets. Here we report dayglow observations of the green line outside the Earth. They have been performed with the Nadir and Occultation for Mars Discovery ultraviolet and visible spectrometer instrument onboard the European Space Agency’s ExoMars Trace Gas Orbiter. Using a special observation mode, scans of the dayside limb provide the altitude distribution of the intensity of the 557.7 nm line and its variability. Two intensity peaks are observed near 80 and 120 km altitude, corresponding to photodissociation of CO2 by solar Lyman α and extreme ultraviolet radiation, respectively. A weaker emission, originating from the same upper level of the oxygen atom, is observed in the near-ultraviolet at 297.2 nm. These simultaneous measurements of both oxygen lines make it possible to directly derive a ratio of 16.5 between the visible and ultraviolet emissions, and thereby clarify a controversy between discordant ab initio calculations and atmospheric measurements that has persisted despite multiple efforts. This ratio is considered a standard for measurements connecting the ultraviolet and visible spectral regions. This result has consequences for the study of auroral and airglow processes and for spectral calibration.