Researchers from the universities of Bonn, Jena, Freiburg, and RWTH Aachen found evidence that a massive tsunami, with waves as high as 15 m (49 feet) hit Oman a thousand years ago. It is unclear to what extent the Arabian and Eurasian plates get stuck. It is therefore extremely important that a tsunami early warning system is put in place for this region.

The scientists focused their terrain investigations on a 200 km (124 miles) coastal strip in the northeastern part of Oman – a country that lies in the Arabian Peninsula.

"There we identified 41 large boulders, which were apparently carried inland by the force of the water," said Dr. Gosta Hoffman from the Institute for Geosciences at the University of Bonn.

Some of the boulders likely formed when the tsunami smashed parts of the cliffs – the largest weighing around 100 metric tons. With this, scientists were able to identify the exact point at which it shattered.

Others showed signs of marine organisms like mussels or oysters, which cannot survive on land.

"Certain methods can be used to determine their time of death," Hoffmann said. "This allowed us to establish when the boulders were washed ashore."

Quartz crystals in the boulders also provided information about the last time they were exposed to the sun, allowing scientists to conclude how long the rocks had been in the place where they were discovered – scientists from Freiburg are the experts in this method. 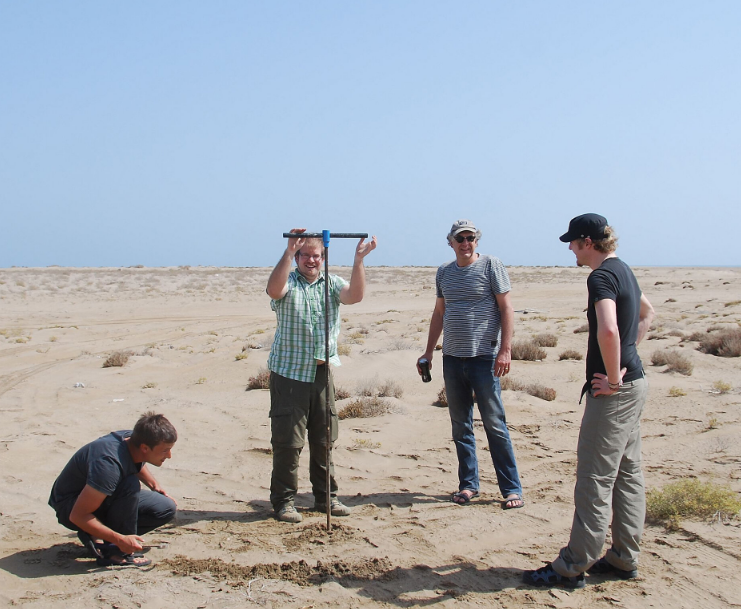 "Many of these measurements gave us a value of about 1 000 years," Hoffman emphasized. "This corresponds well with the dating results of clay fragments we found in tsunami sediments. They originate from vessels used by coastal dwellers."

The Arabian and Eurasian tectonic plates collide in the Arabian Sea, moving towards each other at a speed of around 40 mm (1.6 inches) per year. During this occurrence, one plate slides beneath the other, and even get stuck in the subduction zone sometimes. This may lead to tensions that further strengthen over the years. If they abruptly come loose with a strong jolt, the water column over the plates begins to move, leading to the severely destructive waves that are characteristic of tsunamis.

"So far it has been unclear to what extent the Arabian and Eurasian plates get stuck," said Hoffmann. "It is therefore extremely important that a tsunami early warning system is put in place for this region."

Even a smaller tsunami would have devastating consequences today as a large part of the vital infrastructure in the Sultanate of Oman has been built near the coast, such as the oil refineries and seawater desalination plants.

A well-functioning warning system can, however, at least give residents some time to get to safety.

The study will be published in the Marine Geology journal by January 2020.

Tsunamis have repeatedly hit the shores of Oman (Northern Arabian Sea) in historical times (e.g. 1945, 2013). These events had small (< 3 m) wave heights and short inundation distances, but it is unclear if much stronger events can affect the area. Boulder deposits and fine-grained sediments are described from the north coast of Oman, which are interpreted as evidence for much larger pre-historic tsunami events. No systematic dating was available, which hampers interpretation. In this paper we report radiocarbon dating results for marine organisms in these deposits and present luminescence dating of fine-grained units. We document new sedimentological and archaeological evidence for past tsunamis and describe new data on the impact of the 1945 Makran tsunami in Oman. Since the coast of Oman is prone to tropical storms, we discuss the possibility of sediment transport by cyclones and we compare our findings with recent evidence of boulder transport by storms worldwide. We argue that our results favor an interpretation as tsunamites based on sedimentological, archaeological, and spatial criteria. The dating results allow us to show that a tsunami hit the northern coast of Oman around 1000 years ago. A comparison with historical tsunami impact indicates that this palaeo-event exceeded in size all modern examples in the study area. We speculate that only a large earthquake at the Makran Subduction Zone can produce a tsunami of this size. In that case, the earthquake might have at least partially ruptured the western Makran, which would imply that the western Makran is not completely unlocked. Hazard scenarios based on historical data underestimate the tsunami threat in the Northern Arabian Sea.