Rare solar events, including at least three massive solar storms, have been found in ancient Assyrian cuneiform tablets. The storms correspond to tree ring information, showing that the events occurred around 660 BC. The research was published on October 7, 2019.

Astronomers began observing sunspots using telescopes around 1610, but Babylonians and Assyrians started astrological observations, at the latest, in the 8th century.

Space weather events, including solar and geomagnetic storms, constitute a significant threat to modern civilization, because of our increasing dependence on an electronic infrastructure, said lead author Hisashi Hayakawa from Osaka University, Japan.

Recently, scientists have been able to distinguish multiple severe space weather events prior to 1610 by studying radiocarbon in tree rings. This includes events around 775, 993, and 994 AD.

The research team focused on three events that seemingly have taken place in the years around 660 BC.

"These events occurred far before the onset of instrumental observations, well outside the more modern range of wide observational coverage," said the team.  "Therefore, in order to infer the general trend of solar activity and the occurrence of CMEs, candidate auroral records have been sought in historical documents around these events." 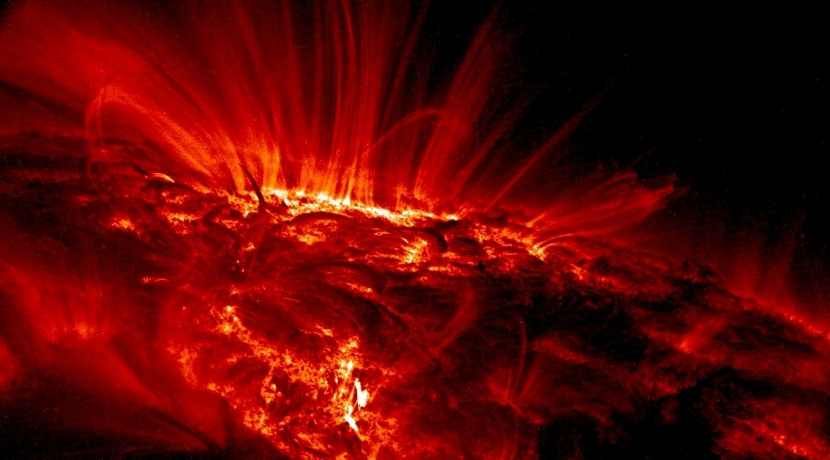 They continued, "The Babylonians and Assyrians had started astrological observations, at the latest, in the 8th century BC. Already in the 7th century BC, Assyrian kings had collected and received astrological reports from professional astrologers, to interpret the ominous meaning of observed celestial events."

The study authors conducted a survey of auroral records kept by the Assyrians to know if there were events that correspond with scientific information about ancient solar activity.

They discovered that cuneiform tablets, rectangular clay tablets with inscriptions, contained records of aurora between 680 and 650 BC. The tablets mentioned rare red skies, describing them as "red cloud", "red covers the sky." Scientists believe that the phenomenon described is likely due to "stable auroral red arcs," where magnetic fields trigger electrons in atmospheric oxygen atoms to spew light.

Also, the team emphasized that Earth's magnetic north pole would have been nearer the Middle East than it is in the present time, suggesting that events associated with solar activity would have been seen further south than they are today.

These tablets are believed to be the "earliest datable records of candidate aurorae" that support the hypothesis that there was increased solar activity at that time.

"These findings allow us to recreate the history of solar activity a century earlier than previously available records. This research can assist in our ability to predict future solar magnetic storms, which may damage satellites and other spacecraft," said senior author Yasuyuki Mitsuma.

The study was published in The Astrophysical Journal Letters.

Auroral records found in historical archives and cosmogenic isotopes found in natural archives have served as sound proxies of coronal mass ejections and solar energetic particles (SEPs), respectively, for dates prior to the onset of telescopic sunspot observations in 1610. These space weather events constitute a significant threat to a modern civilization, because of its increasing dependency on an electronic infrastructure. Recent studies have identified multiple extreme space weather events derived from SEPs in natural archives, such as the event in 660 BCE. While the level of solar activity around 660 BCE is of great interest, this had not been within the coverage of the hitherto-known datable auroral records in historical documents that extend back to the 6th century BCE. Therefore, we have examined Assyrian astrological reports in the 8th and 7th centuries BCE, identified three observational reports of candidate aurorae, and dated these reports to approximately 680 BCE–650 BCE. The Assyrian cuneiform tablets let us extend the history of auroral records and solar activity by a century. These cuneiform reports are considered to be the earliest datable records of candidate aurorae and they support the concept of enhanced solar activity suggested by the cosmogenic isotopes from natural archives.