More than 149 people have died and 59 are still missing 5 days after the onset of the worst rainfall Japan has seen in at least 35 years.

Some 160 000 people were ordered or advised to evacuate on July 5 after the Japan Meteorological Agency issued warnings that record rainfall is expected across the country.

On the same day, The Mainichi reports, opposition parties noted that prime minister and members of his ruling party took part in a party gathering, and questioned whether they had a proper sense of crisis. Even some officials in the ruling government coalition criticized the response as lax.

Some 12 hours later, during the predawn hours of July 6, 5 prefectures sought immediate disaster response assistance from the Self-Defence Forces as the Sun unveiled first glimpses into the scale of destruction that is about to occur.

The prime minister's office and Ministry of Defense gradually boosted their response, going from setting up a liaison office on July 6 to upgrading it to a response office on July 7 and eventually to an emergency disaster response headquarters in the morning of July 8.

The number of people ordered or advised to evacuate rose to 4.72 million on July 7 as JMA said there is an imminent risk of a serious disaster on a scale that has not been seen for decades.

By that time, there were already dozens of dead and missing and more than 70 000 rescuers mobilized. Heavy rains were still falling, rivers bursting their banks and landslides crushing homes throughout the region.

There was really no way to reach and offer timely assistance to hundreds of thousands who needed it, especially since traditional Japan homes are made of wood, excellent for earthquakes but deadly for fast-moving water mixed with mud, rocks and branches.

What we also need to understand here is that the majority of people decided to ignore warnings, as humans usually do.

In addition, many of the dead are elderly people whose houses were submerged in a short period of time, leaving them no time to evacuate.

Record rainfall was recorded at 118 official observations posts in the 72 hours to Sunday, July 8.

Take a look at the map below. Meteorologists knew what's coming and, figuratively speaking, they colored most of the country red, warning on July 5 that record-breaking rain is expected. 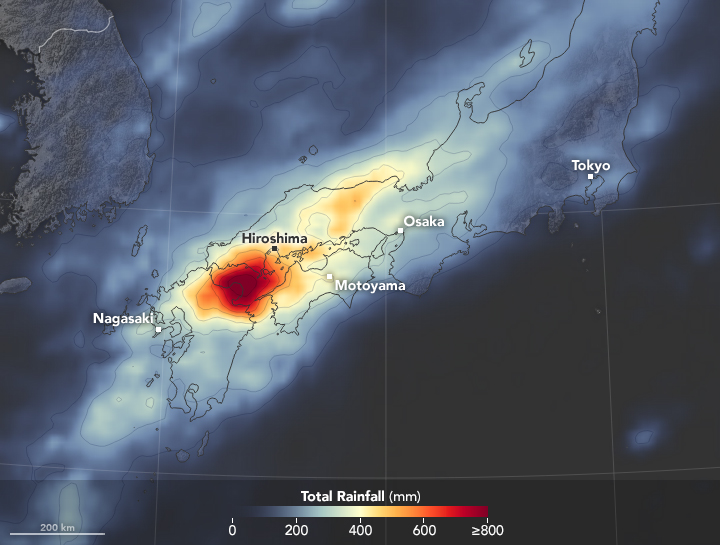 As of 08:50 UTC on July 10, there are 149 confirmed deaths. At least 59 people are still missing and the death toll is expected to rise as Self-Defence Forces continue search and rescue operations. The worst-affected is Hiroshima Prefecture, with at least 55 people reported dead.

269 000 households remain without drinking water and at least 2 300 are without power. Thousands of houses have been damaged or destroyed and phone lines are down across multiple prefectures. Many railroads and highways are still closed, further complicating repair efforts, rescue operations, and aid delivery.

"Going by the scale of the disaster alone, it's on the same level as that of the Great East Japan Earthquake in 2011," said associate professor Yuki Matsushi of the Disaster Prevention Research Institute at Kyoto University.

An official of the city of Hiroshima, where landslides claimed the lives of 77 people in 2014, commented, "We've had no experience of disasters occurring like this over a wide area at the same time."

"In the landslide damage four years ago, it was sufficient to dispatch responders in the city of Hiroshima alone, but this time was different. We have to review our response, including how we organized information," Nobuo Kuwahara of the Hiroshima Prefectural Government's crisis management section pointed out.

"The frequency of heavy rain-linked disasters is on the rise, and we are facing a world where the rules learned from your experiences no longer apply," said Hiroyuki Ohno, head of the Sabo (sand erosion control) and Landslide Technical Centre.

This rainfall event, caused by the passage of Typhoon "Prapiroon" and seasonal rain front that became stationary over the country, is now over and temperatures are rising, but residents should still watch for landslides, officials said, adding that those participating in cleanup efforts should be careful to avoid heat-related issues as the next few days are expected to be hot and clear.

The death toll has reached 220 on July 18 with 10 people still missing.

The country is currently suffering severe heatwave in which at least 15 people died between July 14 and 18 and more than 10 000 were sent to hospitals.