Scientists have discovered planetary waves of vorticity on and inside the Sun similar to those that significantly influence weather on Earth.

Rossby waves are a natural phenomenon in the atmospheres and oceans of planets that form in response to the rotation of the planet. Like Earth, the Sun also rotates and should support Rossby waves, but their existence on the Sun has been debated, until now.

"There's no doubt what we're seeing are Rossby waves due to the measured, textbook relationship between frequency and wavelength, said Laurent Gizon, lead author and co-principal investigator of the Center for Space Science at NYU Abu Dhabi (NYUAD).

Solar Rossby waves are gigantic in size, Gizon explained, with wavelengths comparable to the solar radius. They are an essential component of the Sun's internal dynamics because they contribute half of the Sun's large-scale kinetic energy.

"That these waves are so big and are only seen in the equatorial regions of the Sun is completely unexpected," he said.

The discovery was made by astrophysicists from NYUAD, the Max Planck Institute for Solar System Research, and Stanford University who studied six years of data collected by the Heliospheric and Magnetic Imager (HMI) instrument onboard  NASA's Solar Dynamics Observatory. The data revealed the Rossby waves moving in the direction opposite to the Sun's rotation. 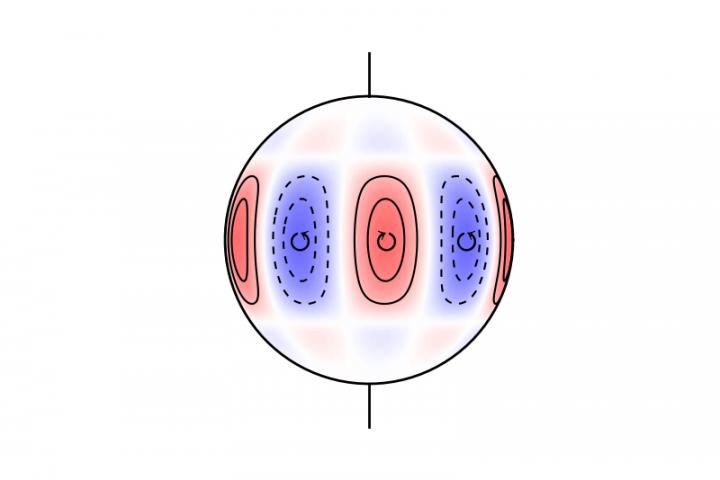 Rossby waves on the Sun are waves of vorticity that move in the direction opposite to rotation. Associated flows have amplitudes of about one meter per second that peak in the Sun's equatorial regions. Credit: Max Planck Institute for Solar System Research

Rossby waves on the Sun are close relatives to those known to occur in the Earth's atmosphere and oceans, Gizon said, but are extremely difficult to detect on the Sun because they have very small flow amplitudes, around one meter per second.

The study required high-precision observations of the Sun over many months. Granules were used as passive tracers to uncover the underlying, much larger vortex flows associated with Rossby waves.

"The HMI images have sufficiently high spatial resolution to allow us to follow the movement of photospheric granules on the Sun's visible surface," said Bjoern Loeptien, scientist at the Max Planck Institute and first author of the paper. These granules are small convective cells roughly 1 500 km (932 miles) in size on the solar surface.

Helioseismology, the study of the solar interior using solar internal acoustic waves, was used to verify the findings and observe the Sun's Rossby waves at depths up to 20 000 km (12 400 miles). "The results from helioseismology and granulation tracking are in excellent agreement," asserted Gizon.

"We don't yet know what role Rossby waves play in the Sun, but know that they can't be ignored in future studies," added Katepalli R. Sreenivasan, NYUAD Center for Space Science principal investigator, "their presence may help us understand solar convection at the largest spatial scales, which remains poorly understood. They are very hard to find because of low signal levels but this research team has used ingenious data processing techniques to discover their existence."