Long-term rainfall has caused catastrophic flood situation across Somalia, described as some of the worst the region has ever seen. Flash and river floods have now affected 630 000 people and displaced almost 214 800. This region was ravaged by drought and near-famine conditions last year.

According to the  Somalia Water and Land Information Management (SWALIM), the current floods are some of the worst the region has ever seen, and the current water level exceeds a 50-year return period in most locations.

In total, flash and river floods have now affected 630 000 people and displaced almost 214 800 in Hirshabelle, South West and Jubaland states as well as Banadir region, following heavy rains received across the country in April.

Juba and Shabelle rivers have reached bank-full levels in several locations, causing flooding much earlier in the season than ever before, SWALIM said. Shabelle was rising at an unprecedented rate of almost 4 meters (13 feet) in less than 7 days in April.

About 180 000 people were forced to flee as the river destroyed homes, farmland and crops in and around the worst affected town of Belet Weyne (Beledweyne) and the surrounding riverine villages in Hirshabelle state where Shebelle burst its banks.

Belet Weyne is currently experiencing its worst flooding ever and some of the affected were already displaced and living in low-lying displacement camps since 2016’s devastating drought and food crisis.

As of May 2, 2018, the river water level began to recede slightly in Belet Weyne and reports from the upper stream villages indicate similar marginal recession in water levels. However, road movement remains limited, thus hindering access to some of the affected areas, including the delivery of urgently needed humanitarian supplies. 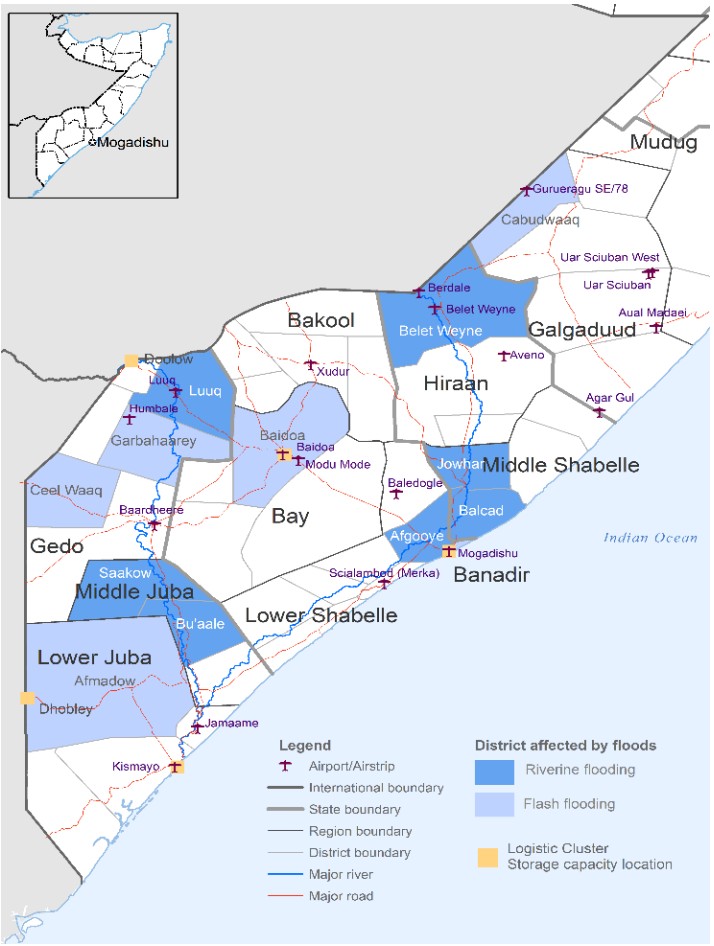 Another 56 000 people have been affected in Middle Shabelle region in Hirshabelle State, including 7 000 people displaced. The flooding has isolated or displaced residents in 18 riverine villages along the river. Road access, grain stores and farms have also been affected. Waterlogging and lack of access to hygiene facilities and uncollected garbage are heightening the risk of communicable diseases, mainly in IDP settlements. Jowhar, Mahaday and Balcad are among the worst affected areas, according to UNOCHA.

The families affected are already suffering high malnutrition rates because of the last two year’s drought, which has devastated crops and killed livestock, Save the Children said, adding that with heavy rainfall in the Ethiopian Highlands forecast to continue, the Shebelle river looks set to continue wreaking havoc from its source and en route to Mogadishu. Many Horn of Africa hotspots of the recent drought are now experiencing flash flooding, including Kenya, with casualties reported exceeding 100 people.

The flooding is compounding an already fragile humanitarian situation with an estimated 5.4 million people in need of assistance in Somalia, 2.7 million of whom require urgent life-saving assistance.

According to SWALIM projections, the heavy rains in the two basins in Somalia and in the Ethiopian highlands will continue next week. River levels inside Somalia are expected to continue rising in the coming days with more cases of flooding along the Juba and Shabelle rivers.

Featured image: The town of Belet Weyne in the Hiraan region of Somalia as seen from the air submerged in flood waters from the Shabelle river on April 30, 2018. Credit: UN, Ilyas Ahmed