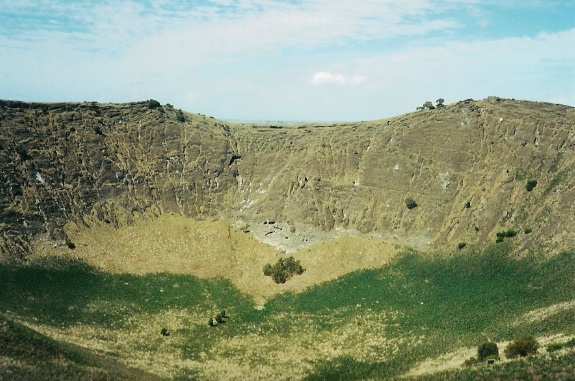 The new Monash University research, published in the Australian Journal of Earth Sciences, gives a detailed picture of an area of volcanic centres already known to geologists in the region.

Covering an area of 19,000 square kilometres in Victoria and South Australia, with over 400 volcanoes, the Newer Volcanics Province (NVP) features the youngest volcanoes in Australia including Mount Schank and Mount Gambier.

Focusing on the Hamilton region, lead researcher Miss Julie Boyce from the School of Geosciences said the surprising discovery means additional volcanic centres may yet be discovered in the NVP.

"Victoria's latest episode of volcanism began about eight million years ago, and has helped to shape the landscape. The volcanic deposits, including basalt, are among the youngest rocks in Victoria but most people know little about them,"Miss Boyce said.

"Though it's been more than 5000 years since the last volcanic eruption in Australia, it's important that we understand where, when and how these volcanoes erupted. The province is still active, so there may be future eruptions."

The largest unrecorded volcano is a substantial maar–cone volcanic complex – a broad, low relief volcanic crater caused by an explosion when groundwater comes into contact with hot magma – identified 37 kilometres east of Hamilton.

Miss Boyce said the discoveries were made possible only by analysing a combination of satellite photographs, detailed NASA models of the topography of the area and the distribution of magnetic minerals in the rocks, alongside site visits to build a detailed picture of the Hamilton region of the NVP.

"Traditionally, volcanic sites are analysed by one or two of these techniques. This is the first time that this multifaceted approach has been applied to the NVP and potentially it could be used to study other volcanic provinces worldwide."

The NVP is considered active, as carbon dioxide is released from the Earth's mantle in several areas, where there is a large heat anomaly at depth. With an eruption frequency of one volcano every 10,800 years or less, future eruptions may yet occur.

It's hoped that this multifaceted approach will lead to a better understanding of the distribution and nature of volcanism, allowing for more accurate hazard analysis and risk estimates for future eruptions.