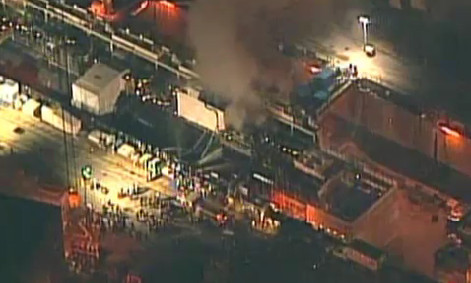 A fire that broke out aboard a nuclear-powered submarine at the Portsmouth Naval Shipyard Wednesday night injured six people.

The fire was still burning as of 11:45 p.m., but the “situation” was “improving,” Shipyard Commander Bryant Fuller said in a brief statement before midnight.

Numerous area fire crews responded to the blaze on the USS Miami SSN 755 at the shipyard.

Six people were injured during the incident, according to Fuller. Three were either treated at the scene or transported to a local medical facility for further attention. Among them was a firefighter who suffered heat exhaustion.

The nuclear reactor “remains in a safe and stable condition, as it has been since this event occurred,”  Fuller said and added no weapons are onboard the submarine.

Shipyard officials stressed the ongoing emergency at the facility does not pose a public safety concern.

Shipyard public affairs specialist Gary Hildreth said the fire was located in the forward compartment of the sub. The shipyard says the sub’s reactor wasn’t operating at the time of Wednesday evening’s fire and wasn’t affected.

Employees were scheduled to return to work at the shipyard on Thursday morning.

The USS Miami has been at the shipyard for maintenance and upgrade work since its arrival in March. Its home station is Groton, Conn., where the U.S. Navy has a submarine base.

Fire apparatus from as far away as Logan International Airport in Boston was sent to the shipyard to help a battle the blaze.

Activity at the front gate dropped to a lull for a brief period between 8-9 p.m.

The USS Miami is a Los Angeles-Class attack sub that was launched in 1988 and commissioned. It has been in dry dock since March 1 for maintenance and upgrades.

Portsmouth Naval Shipyard is located on an island in Kittery, a town next to Portsmouth, which has a population of more than 20 thousand.