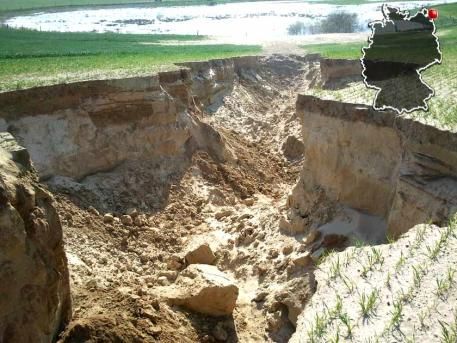 A 50 meters long and four meters deep crater has opened on the Baltic island Mecklenburg-Vorpommern. The cause of the landslide still puzzled geologists. In the middle of a field at Zirchow gapes the mysterious hole.

What exactly happened here? Harry Strohm from the State Agency of Geology said that surface water probably dug into this groove. This may be part of an earlier hole in GDR times. By the holes under the ground, the earth could be now collapsed. So far there have been no landslides though the cause of the crater is still unknown. Usedom may not be in any danger. A geologist is yet to figure out if the hole will increase in size.(Bild) 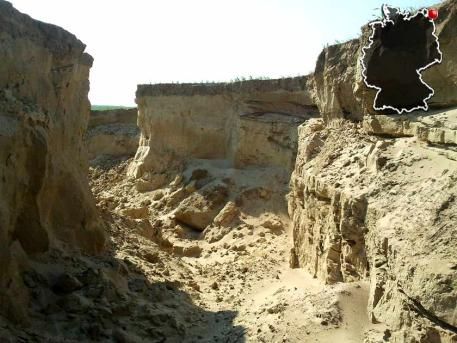 The island is separated to the east from the neighbouring island of Wolin by the Świna strait (or river), which is the main route connecting Szczecin Bay with the Pomeranian Bay, a part of the Baltic Sea. The strait between the island and the mainland is called Peenestrom; it is an underwater extension of the valley of the Peene river, which flows into the westernmost part of Szczecin Bay. The island is mostly plain, partly covered by marshes. (Wikipedia) 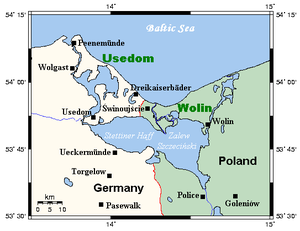 The coast of Usedom Island is characterised by active cliff sections consisting of Pleistocene till, sand and low lying barriers of marine sand that accumulated during the Holocene.

The recent phase of sea-level rise causes coastal retreat along the cliffs as well as in some barrier sections. To analyse how the coastline has reacted over the past 200 years, historical maps and aerial photos were analysed.

To predict the change of the coastline and the morphodynamics in the next 100 years a model was developed considering both alternating wave climate and sea-level rise, but no coastal protection measures.

Based on scenarios provided by the Swedish Meteorological and Hydrological Institute it could be shown that the trend observed in the past will continue in the future. However, the main impact of wave energy might decrease due to a changing distribution of wind directions, whereas an accelerated sea level rise will lead to higher transgression rates. 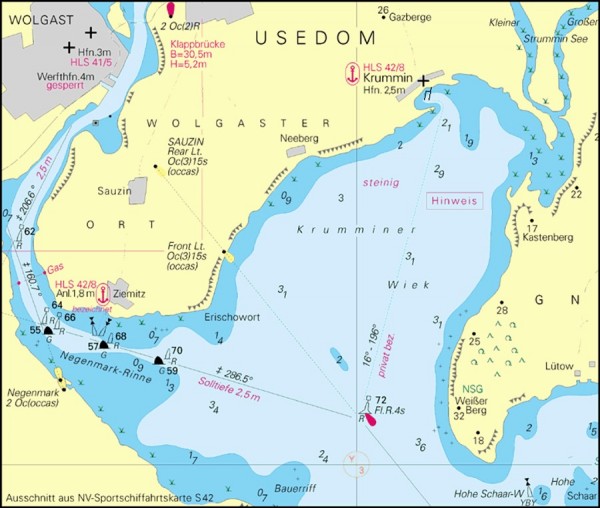 A new GIS-tool developed during the SEAREG project is potentially helpful for long-term spatial planning aspects. The tool assists in determining and assessing flood prone areas. The tool can be used based on data sets and scenarios currently available for planners. After setting different input themes like area of interest, land use, and protected areas, the user is able to overlay them, whereby the tool creates a raster. Thereby it is possible to valuate the information in different ways. Finally, the tool summarises the results of the different themes and fills the cells of a result raster with sums. This step generates an integrated result map. For the application of the GIS-tool it was proved necessary to create a new elevation model. With a resolution of 0.5 m it is more accurate than all other currently available models. (GSF.fi)
Affected areas of concern on Usedom Island are the low-lying barriers. Analysis of the data sets has shown that in all scenarios mainly agricultural areas will be affected, especially grasslands developed on drained fens (tab. 1). This is due to historical reasons as the old settlements are traditionally located on higher places. (GSF.fi)