Scientists have uncovered the source of a mysterious 2021 tsunami that sent waves around the globe in August 2021 when a magnitude 7.5 earthquake hit near the South Sandwich Islands. The epicenter was 47 km (29 miles) below the Earth’s surface — too deep to initiate a tsunami — and the rupture was nearly 400 km (250 miles) long, which should have generated a much larger earthquake. This case represents an extreme example of the broad spectral behaviors of subduction zone earthquakes and calls for attention in the research and warning of similar events.

Now, a new study1 published in AGU Geophysical Research Letters revealed the quake wasn’t a single event, but five, a series of sub-quakes spread out over several minutes. The third sub-quake was a shallower, slower M8.2 quake that hit just 15 km (9.3 miles) below the surface. That unusual, 'hidden' earthquake was likely the trigger of the worldwide tsunami.

"The 2021 August South Sandwich Island Mw 8.2 earthquake was a surprise, because it was initially reported as a magnitude 7.5 event at a deep depth but generated a global-spreading tsunami that would only be expected for a larger and shallower event," researchers said.

"By using seismic data with period as long as 500 seconds, we revealed a hidden Mw 8.16 shallow slow event that happened between clusters of regular ruptures in the beginning and end. Although the slow event contributed 70% of the seismic moment, lasted three minutes, and ruptured a 200 km (124 miles) section of the plate interface, it is essentially invisible at short or intermediate periods, which explains its anomalously low body-wave and surface-wave magnitudes."

"The third event is special because it was huge, and it was silent," said lead author Zhe Jia, a seismologist at the California Institute of Technology.2 "In the data we normally look at [for earthquake monitoring], it was almost invisible."

Predicting hazards for complex earthquakes can be difficult, as the South Sandwich Islands quake demonstrates. The USGS initially reported the magnitude 7.5 quake and only added the M8.2 the following day, as the surprise tsunami lapped on shores up to 10 000 km (6 200 miles) away from its point of origin.3

"We need to rethink our way to mitigate earthquake-tsunami hazards. To do that, we need to rapidly and accurately characterize the true size of big earthquakes, as well as their physical processes," Jia said. 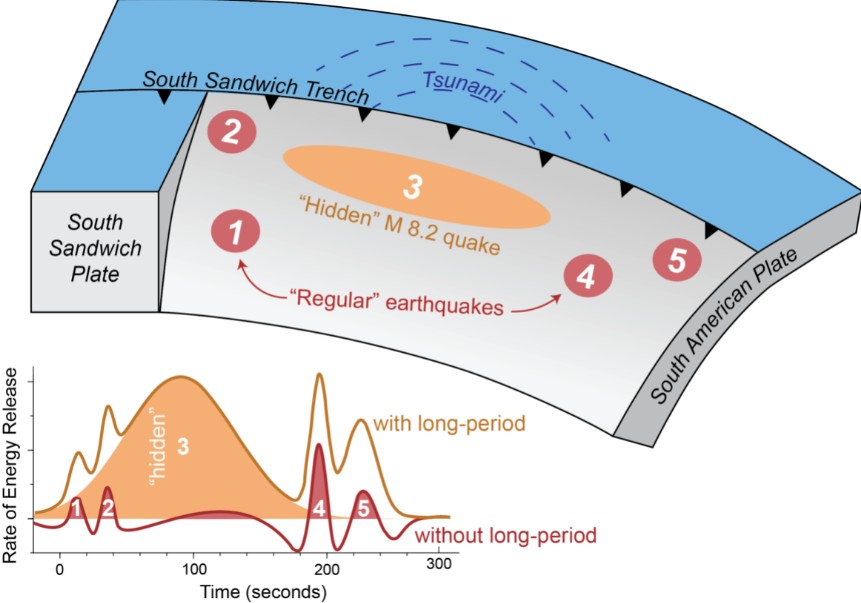 A magnitude 8.2 earthquake was 'hidden' within a magnitude 7.5 earthquake in 2021, sending a mysterious tsunami around the world, according to a new study in Geophysical Research Letters. Credit: Zhe Jia and AGU

Because this type of earthquake can result in an unexpected tsunami, it’s critical to improve our predictions.

"With these complex earthquakes, the earthquake happens and we think, ‘Oh, that wasn’t so big, we don’t have to worry.’ And then the tsunami hits and causes a lot of damage," said Judith Hubbard, a geologist at the Earth Observatory of Singapore who was not involved in the study.

"This study is a great example of how we can understand how these events work, and how we can detect them faster so we can have more warning in the future."

Both Jia and Hubbard noted a long-term goal is to automate the detection of such complex earthquakes, as we can for simple earthquakes. For the 2021 quake, the tsunami was small by the time it reached shores, and most of the permanent residents of the remote, volcanic islands are penguins. But complex earthquakes can pose significant hazards if they generate larger tsunami or strike in a densely populated region.