Comet Bernardinelli-Bernstein (C/2014 UN271) — the largest comet ever discovered — is heading towards our solar system and forecast to make its closest approach in 2031 at 10.1 AU or slightly farther than Saturn. The current estimate suggests its nucleus is between 100 and 370 km (62 and 230 miles) in diameter.

Astronomers discovered Bernardinelli-Bernstein in data gathered by the Dark Energy Survey, which previously released data on hundreds of millions of galaxies. Survey computers took millions of hours automatically searching the whole data set for transient objects moving across the sky.

Two University of Pennsylvania astronomers, Pedro Bernardinelli and Gary Bernstein– whom the comet was named after– spotted the object approaching from the Oort Cloud a group of planetesimals surrounding the Sun at distances of around 1 000 to 100 000 AU.

From 2014 to 2018, the astronomers found the object, yielding the orbit in a Minor Planet Electronic Circular.

If it turns out to be larger beyond that range, it would be the biggest Oort cloud object yet discovered. The 1729 Comet Sarabat is potentially the biggest comet ever seen, with size estimates of about 100 km or 60 miles in diameter. 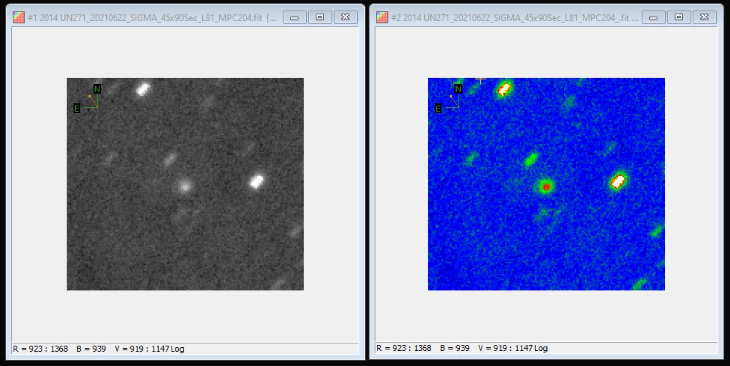 2014 UN271 is a large comet, possibly as large as a dwarf planet. It is falling into our planetary region from the Oort Cloud. It will reach 10.1 AU, slightly farther than Saturn, in 2031.https://t.co/gbjOAK1Kd4 pic.twitter.com/QWPOglkYCq

"That] puts it on a similar scale, if not larger than, Sarabat's huge comet C/1729 P1, and almost undoubtedly the largest Oort Cloud object ever discovered – almost in dwarf planet territory," said citizen astronomer Sam Deen.

The comet will continue inward into 2031, nearly the orbit of Saturn, before heading back to space.

Currently, Bernardinelli-Bernstein is around 22 AU from the Sun, which means it's already closer than Neptune at 29.7 AU.

Before it gets closer, the object is expected to develop the characteristic coma and tail of a comet as icy material on the surface vaporizes from the Sun's heat. This would give astronomers a closer look at Oort cloud objects.

Deen calculates that Bernardinelli-Bernstein would come as bright as Pluto at best, but more possibly it will reach the brightness of Pluto's moon, Charon. After its close pass, 2014 UN 271 will return to the Oort Cloud on a several hundred millennia trip and peak distance of almost 60 000 AU.

Scientists are now working on a paper about the new object, which will be published in the coming months.