More than 59 000 people have evacuated their homes as Tropical Storm "Dujuan" — locally known as Auring, brought widespread flooding and disruption to the Philippines on Monday, February 22, 2021. As of 03:00 UTC (11:00 LT), the storm has weakened into a Low-Pressure Area (LPA) prior to crossing the Rapu-Rapu Islands in Albay and is forecast to traverse the central region in the next 24 hours.

Dujuan made landfall in Batag Island in Laoang, Northern Samar, at 01:00 UTC (09:00 LT) on Monday. The worst-affected provinces in the south have been Caraga and Surigao del Sur.

As a safety precaution, the power was cut off in several towns of Surigao del Sur, said provincial governor Ayec Pimentel. More than 18 000 people were preemptively evacuated in the province, while more than 8 000 individuals have fled their homes.

The storm also caused disruptions as around 36 domestic flights have been canceled. More than 2 000 passengers were stranded in various ports in the eastern region as rough seas prompted coast guard officials to suspend ferry trips.

CARAGA is currently submerged in water, February 21, due to #TyphoonAuring. Please send prayers to various places that have been affected by Typhoon Auring. Please do spread awareness.

Typhoon is one thing you have to deal if you live here (phils). This is #TyphoonAuring devastating Surigao, Del Sur. It is expected to landfall soon in Caraga Region. Neg Occ (i live here) is in Signal # 1 , we've had enough recently and last year  kakapoy na pero padayun ta! pic.twitter.com/efmb3qx83J

In Caraga, the civil defense said more than 51 000 people from 13 723 families have evacuated their homes, and are now staying in a total of 331 evacuation centers across the region.

A total of 1 246 people were also displaced from 10 rural communities of Davao de Oro, while 75 others were moved to safe areas in Davao Oriental.

In the Bicol region, at least 1 141 passengers and 14 trucks were stranded in three ports, the Philippine Ports Authority stated.

Outside Matnog Port, around 255 buses and 80 cars were paralyzed in heavy traffic along the highway of the town, awaiting authorities to lift the suspension once the weather improves.

Moderate to heavy rains are forecast over Camarines Norte, Quezon, and Aurora, on Tuesday, February 23.

Light to moderate with at times heavy rains are expected over Metro Manila, the rest of CALABARZON, MIMAROPA, Camarines Sur, Bulacan, Nueva Ecija, Isabela, Cagayan including the Babuyan Islands, and Batanes.

It is expected to move northwestward to westward and may traverse Bicol Region, Southern Quezon, Marinduque, and northern Mindoro in the next 24 hours. There is a chance of the disturbance dissipating while traversing Southern Luzon. 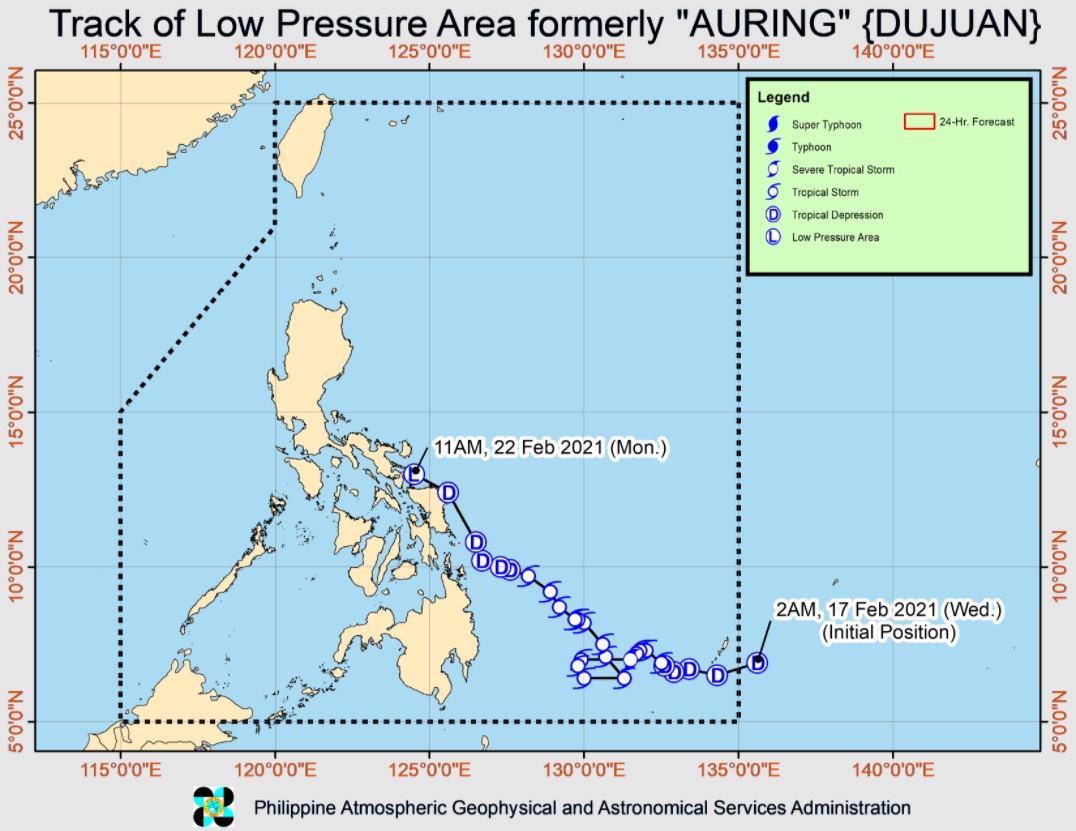