A complex winter storm will start today, January 30, 2021, in the Midwest with heavy snow from the Upper Mississippi Valley to the Ohio Valley, including the Chicago metro area. On Sunday, January 31, the snow and wintry mix will spread into the Mid-Atlantic region before a potential Nor'easter intensifies and significantly impacts portions of the Mid-Atlantic, Northeast, and New England on Monday and Tuesday, February 1 and 2. 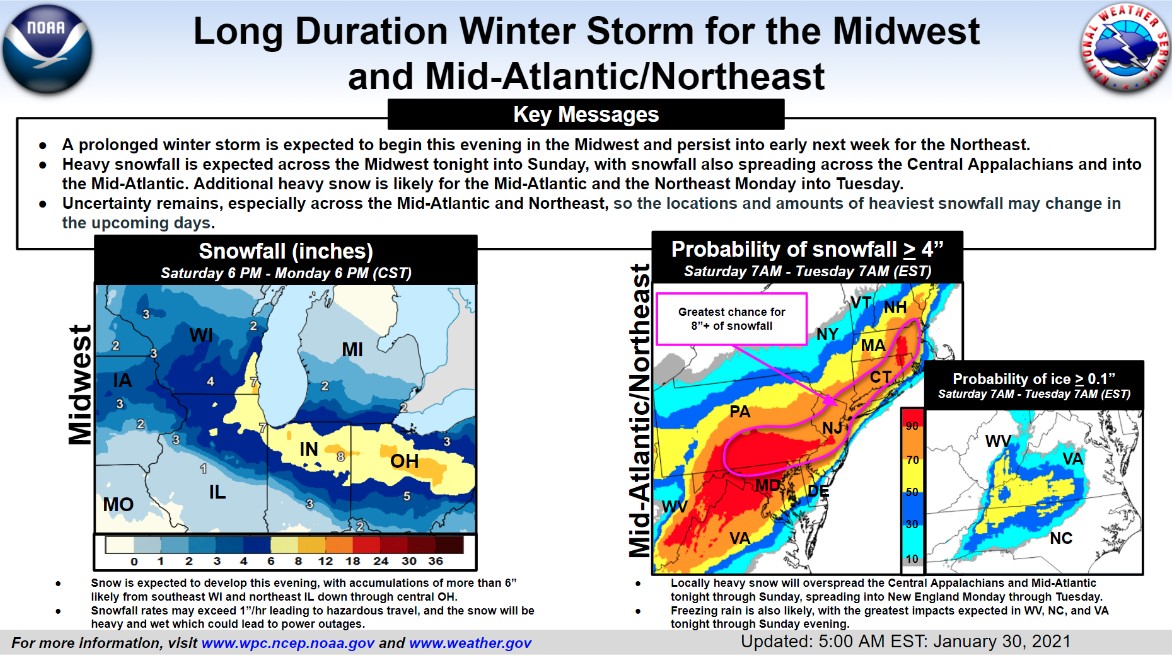 A storm exiting the Rockies will emerge across the Central High Plains eventually moving eastward to the Mid-Atlantic Coast by Monday morning, NWS forecaster Ziegenfelder said.

The rain will move eastward into parts of the Ohio/Tennessee Valley overnight and into the Southeast/Mid-Atlantic by Sunday morning.

Meanwhile, snow will develop over parts of the Northern Plains/Upper Mississippi Valley through today. By this evening, the snow will expand into parts of the Upper Great Lakes and the Ohio Valley.

Along the rain/snow line, rain/freezing rain areas will also develop from the Middle Mississippi Valley into the Ohio Valley and into the Central Appalachians and adjacent foothills.

Overnight, snow will move into southern portions of the Mid-Atlantic.

There will be areas of rain/freezing rain over parts of western Virginia and North Carolina on Sunday.

While the snow will wane over the Upper Midwest overnight Sunday, it will continue over the Ohio Valley, parts of the Great Lakes, and into the Mid-Atlantic through Monday morning.

The rain over the Southeast will shift offshore by Monday morning.

The systems will produce rain and higher elevation snow over the Pacific Northwest and Northern California, continuing through Monday morning.

The rain will be heavy over parts of Northern California.