A strong frontal system — Category 3 atmospheric river — impacting California and parts of Nevada through Thursday, January 28, 2021, will bring gusty winds, very heavy rain, and mountain snow, in some parts extreme. Whiteout/blizzard conditions and heavy snow in the Sierra Nevada may cause road closures and travel delays.

As a result of strong winds, more than 330 000 customers in California are without power, as of 09:00 UTC on January 27, and the number keeps rising.

Authorities warned that the 34 800 ha (86 000 acres) of land burned around the Santa Cruz Mountains in the fall of 2020 by the massive CZU Lightning Complex fire is especially vulnerable.

The soil is now weak without vegetation to hold it in place and at heightened risk for debris flows and mudslides, the LA Times reports.

Blizzard Warning for the Sierra 10 PM tonight thru Friday. Strong winds will produce zero visibility & whiteout conditions with high drifting snow. This will be a dangerous & life-threatening situation. Do not attempt to travel.

"This is a blockbuster winter storm event for us," said Mark Deutschendorf, a meteorologist at the National Weather Service in Reno, Nevada.

"Travel is not recommended from late Tuesday night to Friday across the Sierra and Lake Tahoe area, including western Nevada. If you do venture outdoors, be prepared to spend time an extended period of time in your car."

The Sierra Avalanche Center in Truckee has issued a BACKCOUNTRY AVALANCHE WARNING for the Greater Lake Tahoe area a couple of hours ago. Extreme avalanche danger is expected for Wednesday, Thursday, and into Friday morning in the mountains.

The Eastern Sierra Avalanche Center has issued a BACKCOUNTRY AVALANCHE WARNING for the eastern slopes of the Sierra Nevada between Virginia Lakes and Bishop Creek. Widespread high avalanche danger is expected through Friday. 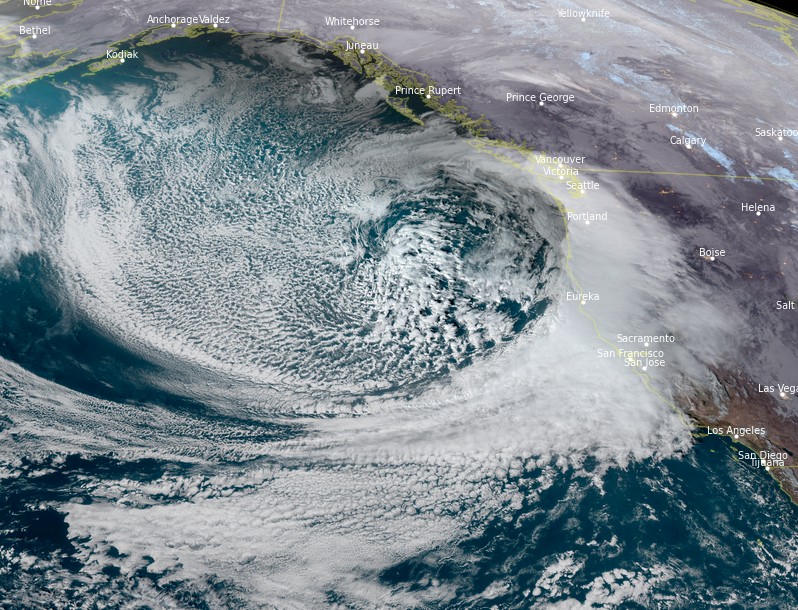 Deep moisture will be directed onshore and will help produce several inches of rain along the coast and lower elevations. Flash flooding and debris flow near recent burn scars may occur.

WPC has highlighted part of this region as having a Moderate Risk for excessive rainfall.

Mountain snow will likely be heavy at times across the Sierra Nevada. Several feet of snow (as much as 3 m / 10 feet) will add up through Thursday night, with road closures and travel delays very likely.

Blizzard Warnings are also in effect for part of the Sierra Nevada. A Flash Flood Watch has been posted as well.

Over the next three days, as much as 250 – 380 mm (10 to 15 inches) of rain could fall along the central California coast roughly between Monterey and Santa Barbara.

This amount of rain in a 72-hour period is very rare for this region, with an annual exceedance probability of only 2%.

While extremely dangerous, this weather event is expected to provide much-needed relief as the current statewide snowpack in California is just 40% of the average to date.

Severe drought conditions cover nearly 80% of the state, which relies on winter snowpack for water supply.