A rhythmic pattern sounding like a low-frequency musical note was detected from the magnetosphere over Lofoten, Norway, on Monday, January 18, 2021. The rare event, which is also called a pulsation continuous, is a strictly regional phenomenon, according to INTERMAGNET– a global network of observatories monitoring the Earth's magnetic field.

Around 05:30 UTC on Monday, the local magnetic field over Lofoten began to swing back and forth in a rhythmic pattern, said Norweigian citizen scientist, Rob Stammes. Electrical currents in the ground reportedly did the same thing, he added.

"I received a musical note from the magnetosphere," Stammes stated. "It was a nearly pure sine wave– like a low-frequency musical note. The episode lasted for more than 2 hours."

While Stammes had recorded such notes before, he pointed out that the phenomenon is a rare occurrence. "I see a pattern like this only about once a year."

Dr. Tony Phillips of spaceweather.com said the phenomenon is called a pulsation continuous, or PC.

"Imagine blowing across a piece of paper, making it flutter with your breath. The solar wind does the same thing to magnetic fields," he explained.

"PC waves are essential flutters propagating down the flanks of Earth's magnetosphere excited by the breath of the sun." 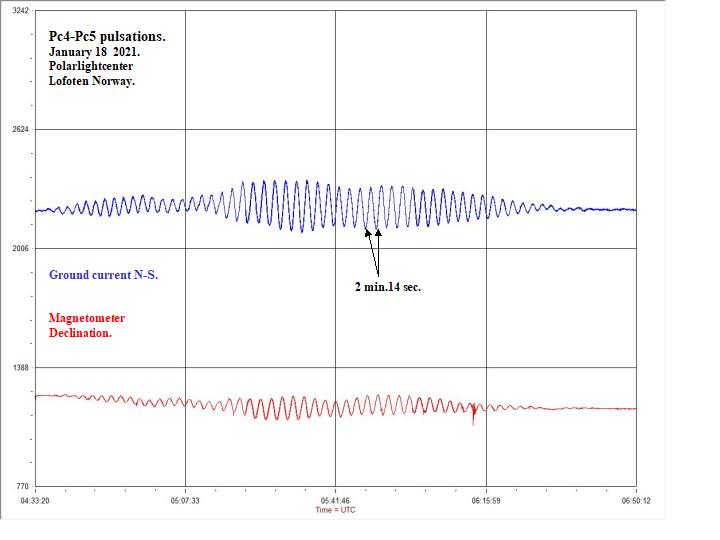 As to what happens in the sky when such musical notes occur from the magnetosphere, Stammes said, "I wish I knew. I was asleep at the time."

Dr. Phillips added that it's possible that no one actually knows as such tones are rare and often happen while skies are cloudy, blocking any unusual auroras from views.

To find out, Stammes noted that he plans to create an alert system.

"It's great to see that our atmosphere can make this happen. This phenomenon can also be seen on other magnetometers, for example, from Abisko and Kiruna, roughly in the same place of the auroral oval."