Tropical Storm "Vamco" formed on November 9, 2020, as the 22nd named storm of the 2020 Pacific typhoon season. The system entered the Philippine Area of Responsibility (PAR) at 12:00 UTC on November 8, receiving the name Ulysses — still as a tropical depression. By 12:00 UTC on November 10, Vamco intensified into a Severe Tropical Storm. The Office of Civil Defense (OCD) has raised a red alert status in Bicol Region (Region 5).

The minimum central barometric pressure was 994 hPa, and the system was moving northwestward at  20 km/h (13 mph).

According to PAGASA, the center of  Vamco is more likely to make landfall over Quezon early Thursday morning, November 12, with a close approach of Catanduanes and Camarines Norte tomorrow afternoon and evening (LT), respectively. 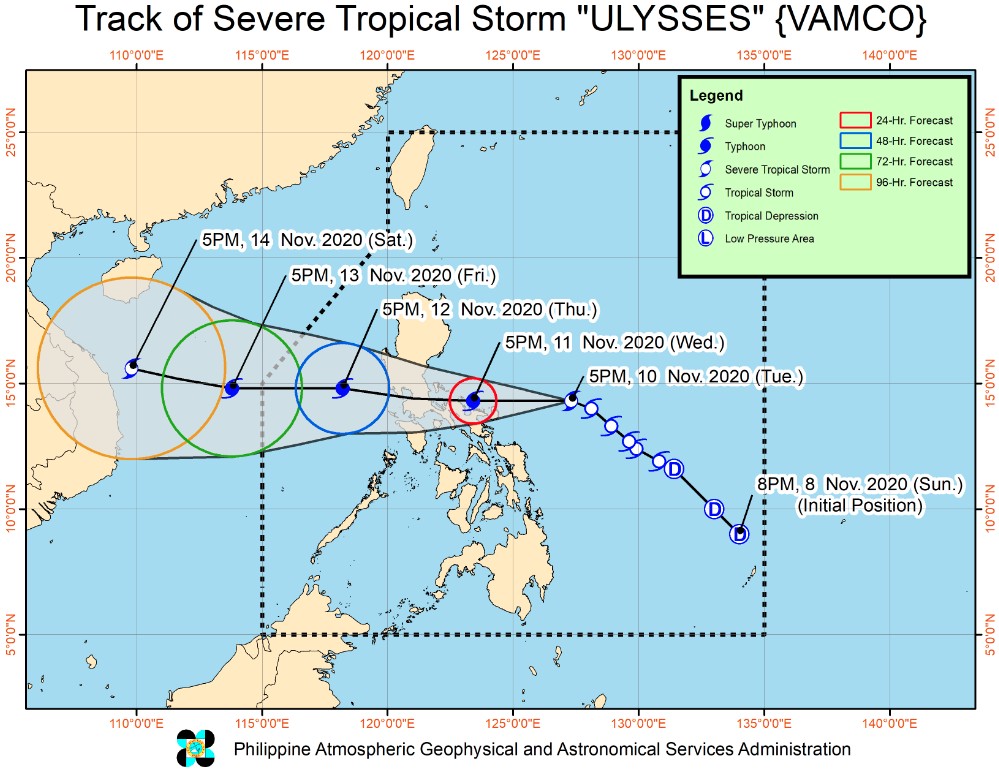 However, a slight southward shift in the orientation of the track forecast shows an increasing likelihood of landfall over Camarines Norte tomorrow afternoon or evening.

"Landfall at or near peak intensity is highly likely." 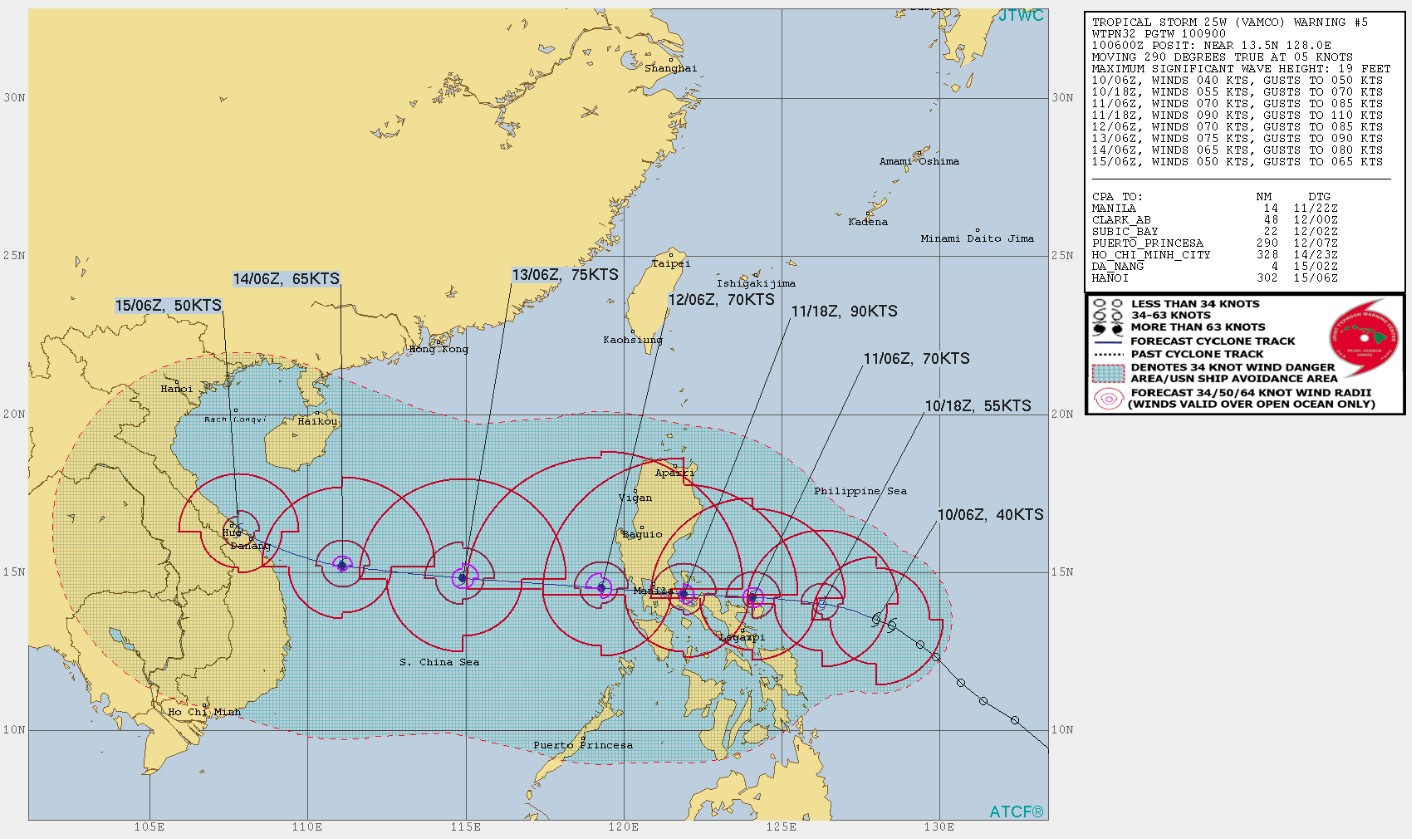 Areas under Tropical Cyclone Wind Signals (TCWS) #2 — Luzon — will be experiencing damaging gale- to storm-force winds while those under TCWS #1 — Luzon, Visayas — will have a strong breeze to near gale conditions during the passage of the tropical cyclone. Based on the intensity forecast, the highest wind signal to be hoisted during the passage of this storm will be TCWS #3. 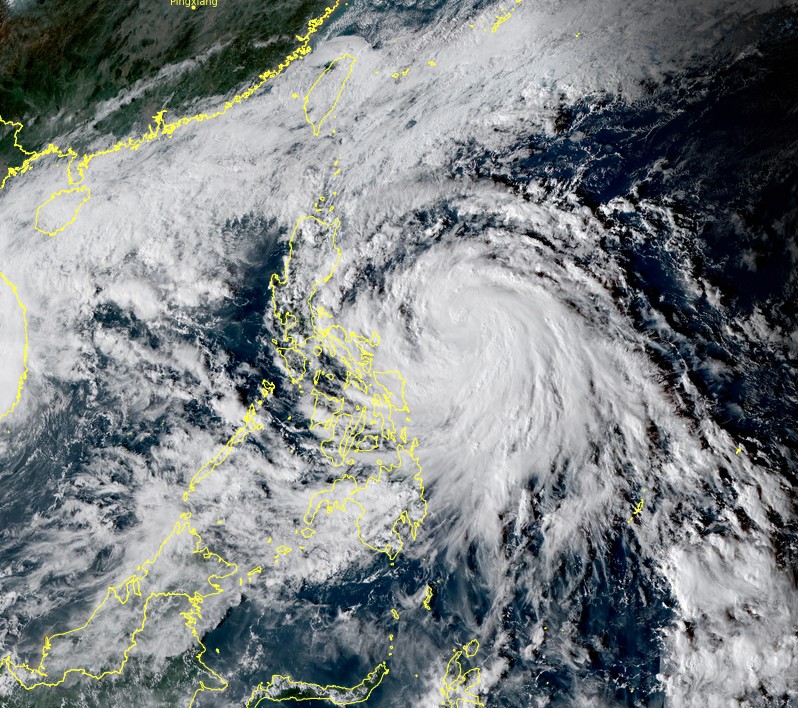 These storm surges, which may be accompanied by swells and breaking waves reaching the coast can cause life-threatening and damaging coastal inundation.

Over the next 24 hours, rough to very rough seas (2.5 to 5 m / 8.2 – 16.4 feet) will be experienced over the entire seaboards of Northern Luzon and the seaboards of Kalayaan Islands due to the surge of the Northeast Monsoon.

Meanwhile, Vamco will also bring rough to very rough seas (2.5 to 6 m / 8.2 – 19.6 feet) over the seaboards of areas under TCWS and the eastern seaboard of Eastern Samar (that are not under TCWS). Sea travel is risky over these waters, especially for mariners of small seacrafts.

Moderate to rough seas will be experienced over the remaining seaboards of the country. Mariners of small seacrafts are advised to take precautionary measures when venturing out to sea. Inexperienced mariners should avoid navigating in these conditions, PAGASA said.

The Office of Civil Defense (OCD) has raised a red alert status in the Bicol, still reeling from destruction brought by Super Typhoon "Goni" — locally known as Rolly.

A 'no sail' policy was implemented for fisherfolks and the pre-emptive evacuation for residents in low-lying and high areas which may be affected by flash floods and landslides, the Manila Bulletin reports.

Yucot advised all local DRRM councils to 'explore all means of communicating advisories to the communities' since some areas were still experiencing power interruption and limited mobile and internet connection caused by Super Typhoon "Goni."