"There is a vast spiral of ultraviolet light over Mars' South Pole. We understand the origin of the light, but its shape is a mystery," said Nick Schneider of the University of Colorado's Laboratory for Atmospheric and Space Physics.

For years, MAVEN has been monitoring the Martian light called "nightglow," which also occurs on Earth and where it is called airglow".

Ultraviolet radiation from the Sun breaks apart compounds in the upper atmosphere of Mars during the day. The atoms glow as they reassemble themselves during nighttime.

On Earth, airglow looks similar to the aurora borealis and is visible to the naked eye. On Mars, the light is ultraviolet, which is invisible to the human eye. While researchers understand the nightglow's source, the spiral shape was just recognized recently. 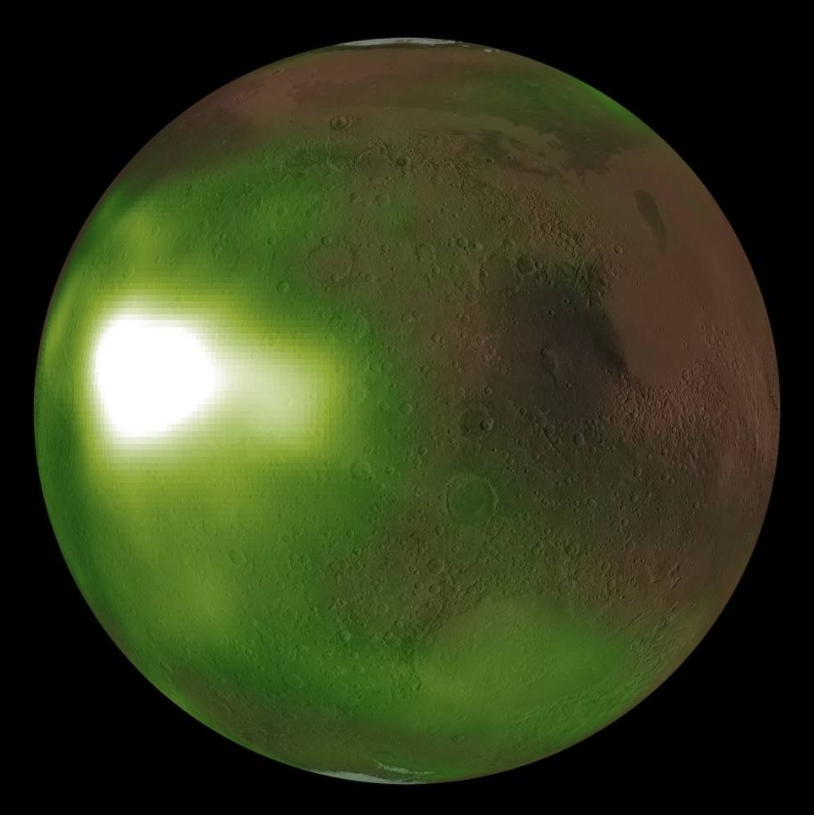 "We were preparing a demo on our lab's internal projection sphere, which turned out to be the first time we had plotted the UV glow in polar coordinates. The spiral 'popped' and we were all quite giddy," said Schneider.

Only the South Pole has a nightglow with a spiral pattern, which pulses once a day. This, however, is just the tip of the iceberg as the red planet is surrounded by pulsating nightglow.

Over the North Pole, there is a bright blob that pulses twice a day, while there are three blobs pulsing thrice a day around the equator.

Schneider noted that the phenomenon is complex, so he and his colleagues developed a general circulation model (GCM) of the Martian Atmosphere to make sense of it. 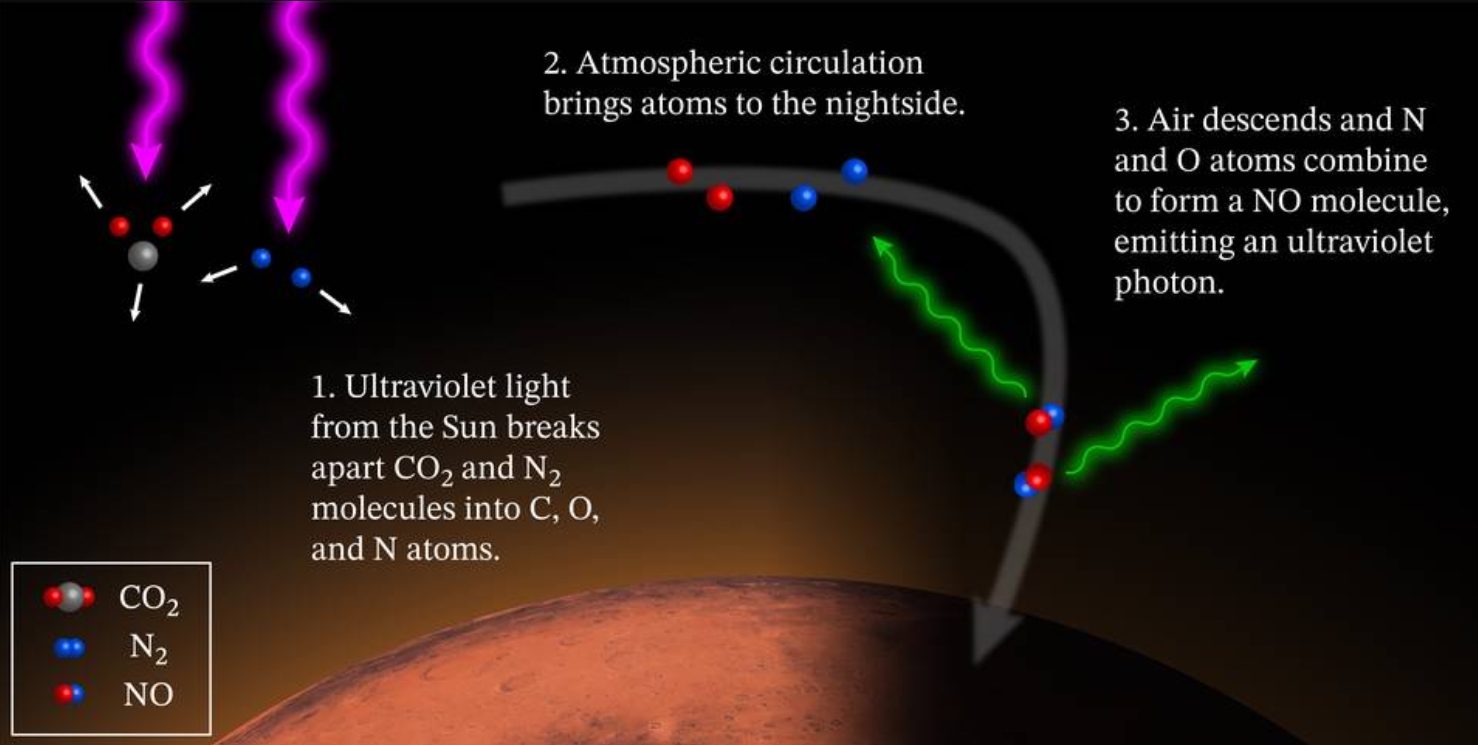 GCMs model planetary atmospheres and they are used by weather forecasters on Earth. Planetary scientists have Martian versions of GCMs that have precise values for solar heating, chemistry, winds, and cloud formation, to name a few.

The model showed that the nightglow on Mars is shaped by atmospheric tides– the Sun's gravity pulls on the atmosphere, triggering a natural response.

The atmosphere rings like a bell three times a day, therefore generating the pulsating blobs around the equator.

"We were really impressed that the Mars General Circulation Model reproduced the equatorial patterns so well," he stated. However, the model did not account for the spiral pattern. "We've really struggled to explain it."

For now, the spiral nightglow remains a mystery while researchers await more information from MAVEN and the GCM. 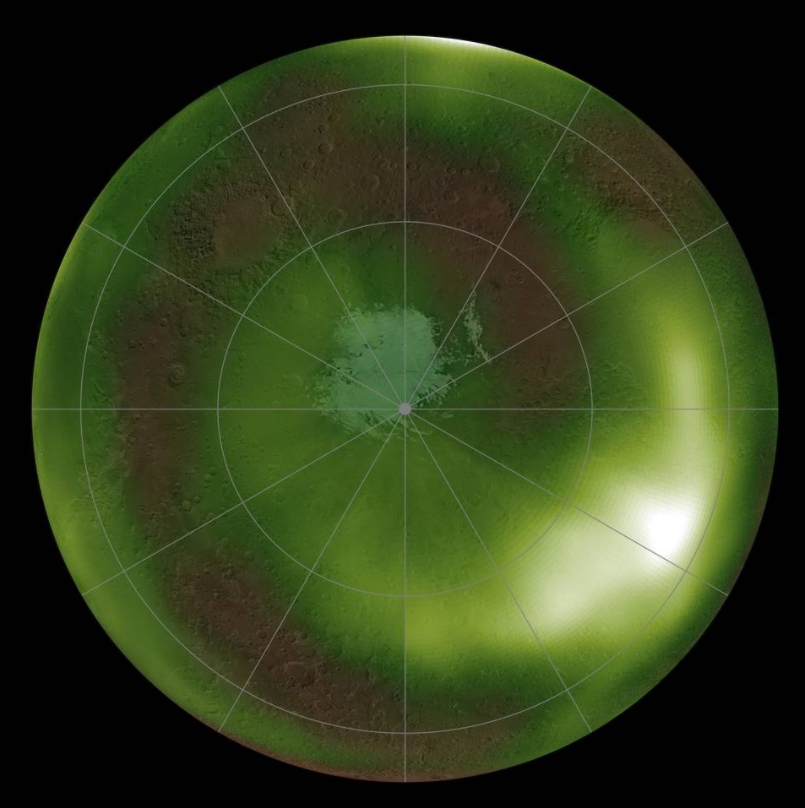 We report results from a study of two consecutive Martian years of imaging observations of nitric oxide ultraviolet nightglow by the Imaging Ultraviolet Spectrograph (IUVS) on the Mars Atmosphere and Volatile Evolution (MAVEN) mission spacecraft. The emission arises from the recombination of N and O atoms in Mars' nightside mesosphere. The brightness traces the reaction rate as opposed to the abundance of constituents, revealing where circulation patterns concentrate N and O and enhance recombination. Emissions are brightest around the winter poles, with equatorial regions brightening around the equinoxes. These changes offer clear evidence of circulation patterns transitioning from a single cross‐equatorial cell operating during solstice periods to more symmetric equator‐to‐poles circulation around the equinoxes. Prominent atmospheric tides intensify the emissions at different longitudes, latitude ranges, and seasons. We find a strong eastward‐propagating diurnal tide (DE2) near the equator during the equinoxes, with a remarkably bright spot narrowly confined near (0°, 0°). Wave features at the opposite winter poles are dissimilar, reflecting different circulation patterns at perihelion versus aphelion. LMD‐MGCM simulations agree with the patterns of most observed phenomena, confirming that the model captures the dominant physical processes. At the south winter pole, however, the model fails to match a strong wave‐1 spiral feature. Observed brightnesses exceed model predictions by a factor of 1.9 globally, probably due to an underestimation of the dayside production of N and O atoms. Further study of discrepancies between the model and observations offers opportunities to improve our understanding of chemical and transport processes controlling the emission.