A group of researchers at the Lyell Centre in Edinburgh formulated a way to use math formulas to help forecast earthquakes. The team describes translating the movement of a particular type of rock to mathematical equations, leading to the development of a predictive formula.

For decades, scientists have been trying to figure out a way to forecast when a major earthquake will occur. In this new endeavor, researchers took math as another approach to the problem. They started their efforts with evidence that particular types of rock play a major role in earthquakes. The rocks make up a group called phyllosilicates and they form in plates or sheets.

Earthquakes happen when such rocks slide against each other, the theory suggests. The researchers emphasized that frictional strength is a critical factor in such slippage. It is the force needed to push one of the sheets against another sheet.

Frictional strength is something that can be calculated, so for them to come up with useful calculations, the researchers analyzed many samples of phyllosilicates and the ways in which they interact with one another, under various conditions.

The team used what they learned to formulate equations that would describe such behavior, deep underground where they could not be tested directly. They factored in other variables as well, such as humidity levels, fault movements, and the speed at which the ground can move in fault areas.

After much effort with the equations, the researchers developed a formula that they believe can be applied in real-world situations to forecast when an earthquake might happen in a certain location.

The group noted that their formula is still a work in progress, and scientists are still working out how phyllosilicates behave under different scenarios. For instance, phyllosilicates can actually stand in the way of earthquakes occurring in some unusual places. 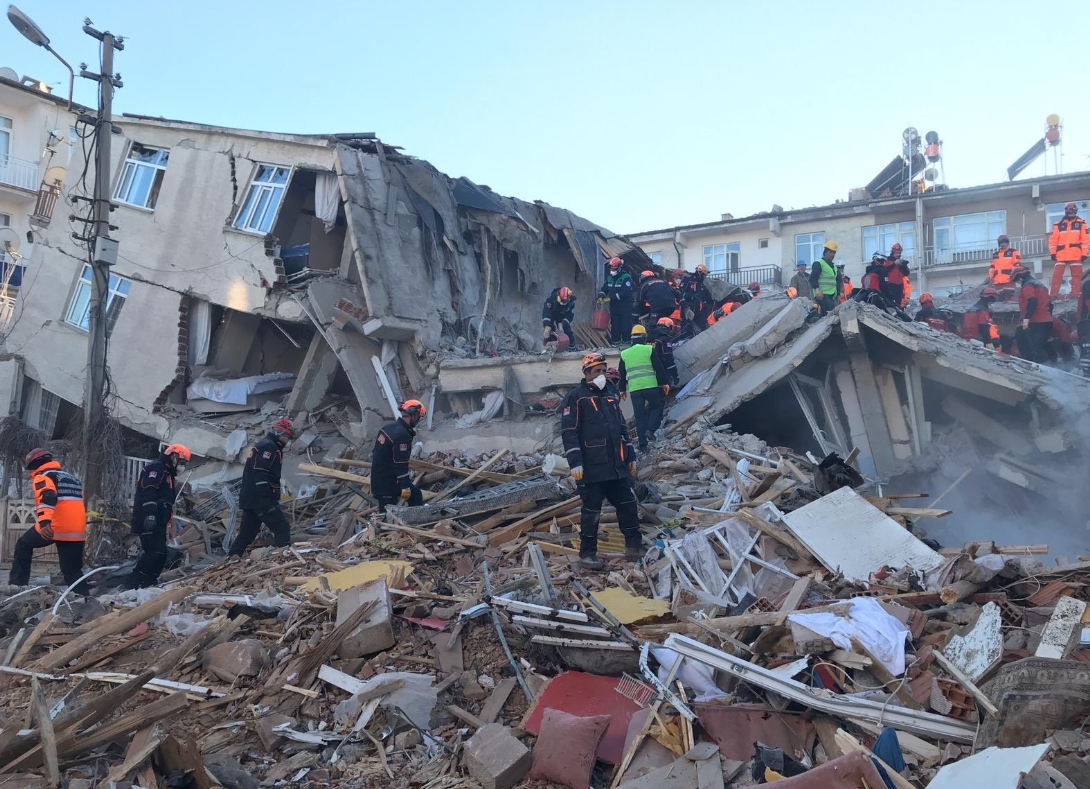 2020 Elazığ earthquake: one of the deadliest quakes this year. Image credit: Ekrem İmamoğlu

We report Global Positioning System (GPS) measurements of postseismic deformation following the 2015 Mw7.8 Gorkha (Nepal) earthquake, including previously unpublished data from 13 continuous GPS stations installed in southern Tibet shortly after the earthquake. We use variational Bayesian Independent Component Analysis (vbICA) to extract the signal of postseismic deformation from the GPS timeseries, revealing a broad displacement field extending >150 km northward from the rupture. Kinematic inversions and dynamic forward models show that these displacements could have been produced solely by afterslip on the Main Himalayan Thrust (MHT) but would require a broad distribution of afterslip extending similarly far north. This would require the constitutive parameter (a  − b )σ to decrease northward on the MHT to ≤0.05 MPa (an extreme sensitivity of creep rate to stress change) and seems unlikely in light of the low interseismic coupling and high midcrustal temperatures beneath southern Tibet. We conclude that the northward reach of postseismic deformation more likely results from distributed viscoelastic relaxation, possibly in a midcrustal shear zone extending northward from the seismogenic MHT. Assuming a shear zone 5‐20 km thick, we estimate an effective shear‐zone viscosity of ~3 · 1016 − 3 · 1017 Pa · s over the first 1.12 postseismic years. Near‐field deformation can be more plausibly explained by afterslip itself and implies (a  − b )σ ~ 0.5‐1 MPa, consistent with other afterslip studies. This near‐field afterslip by itself would have re‐increased the Coulomb stress by ≥0.05 MPa over >30% of the Gorkha rupture zone in the first postseismic year, and deformation further north would have compounded this reloading.