Astrophysicists at Tohoku University in Japan have suggested a new theory for the origin of supermassive black holes using large computer simulations. The theory helps to further explain the massive number of black holes currently observed.

Nearly every galaxy in the universe today has a supermassive black hole at its core, the theory goes. Their masses may reach up to 10 billion times the mass of the Sun, but their source remains a mystery in astronomy.

But past studies have indicated that this model only works with pristine gas containing only hydrogen and helium. Heavier elements like carbon and oxygen alter the gas dynamics, causing the collapsing gas to break into many smaller clouds, which form their own small stars, instead of a few supermassive stars.

To test the possibility that supermassive stars could form in heavy-element-enriched gas, the team used supercomputer ATERUI II from the National Astronomical Observatory of Japan.

Star formation in gas clouds with heavy elements could be difficult to simulate due to the computational cost of simulating the violent emission of the gas. On a positive note, the supercomputer's high calculation speed and advances in computing power enabled the team to study the formation of stars in great detail. 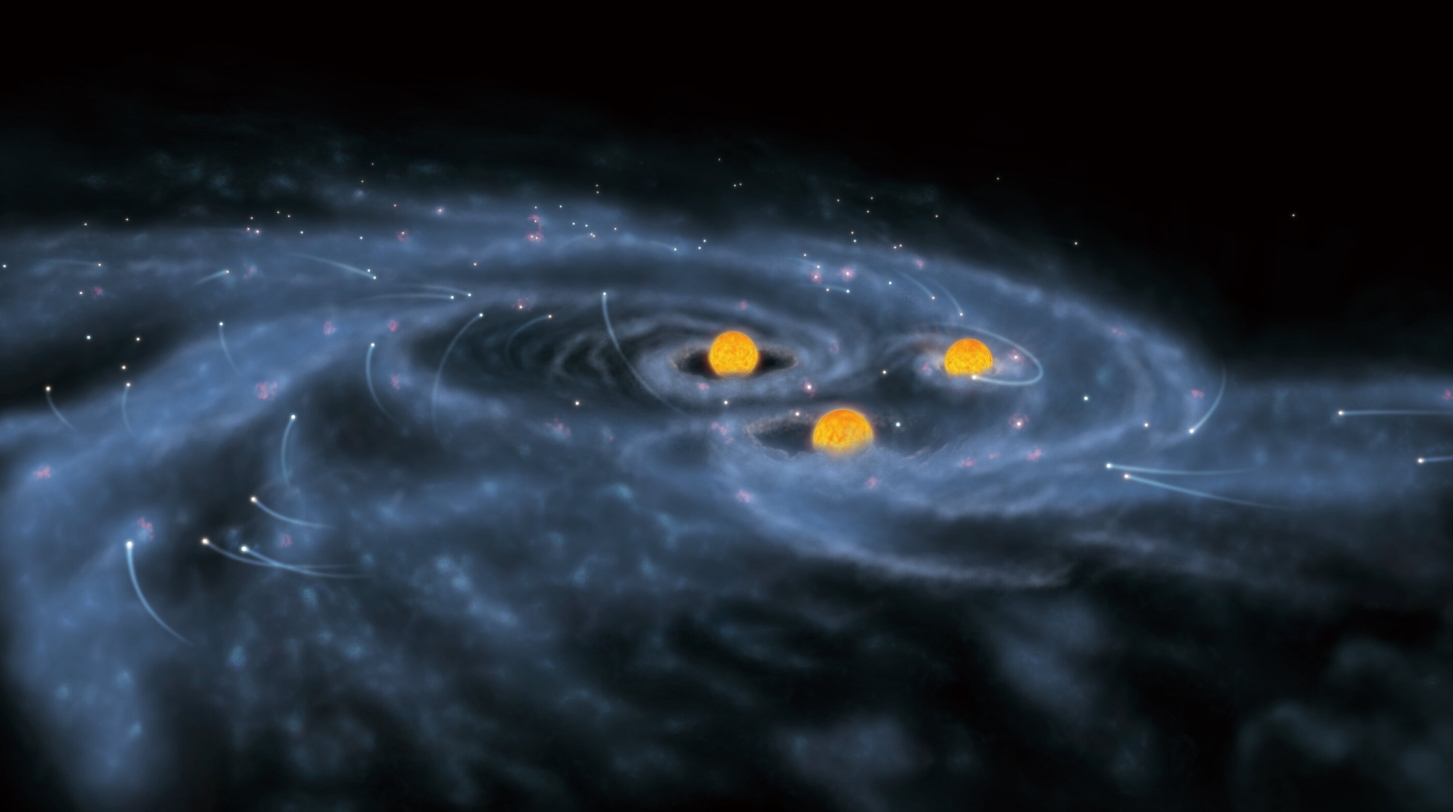 Artist's impression of the formation of supermassive stars which evolve into a supermassive black hole. Credit: NAOJ

In contrast to previous predictions, the astrophycisists found that supermassive stars can still form from heavy-element-enriched gas clouds. The gas cloud fragmented violently, as expected, and many smaller stars form.

However, there is a powerful gas flow towards the cloud's center. The smaller stars are dragged by the flow and swallowed by massive stars in the center. The simulations resulted in the formation of an enormous star 10 000 times bigger than the Sun.

"This is the first time that we have shown the formation of such a large black hole precursor in clouds enriched in heavy-elements," said Sunmyon Chon, a postdoctoral fellow at the Japan Society for the Promotion of Science and Tohoku University.

"We believe that the giant star thus formed will continue to grow and evolve into a giant black hole."

"Our new model is able to explain the origin of more black holes than the previous studies," explained Kazuyuki Omukai, a professor at Tohoku University. He continued, "his result leads to a unified understanding of the origin of supermassive black holes."

Direct collapse black hole (DCBH) formation with mass ≳105 M⊙ is a promising scenario for the origin of high-redshift supermassive black holes. It has usually been supposed that the DCBH can only form in the primordial gas since the metal enrichment enhances the cooling ability and causes the fragmentation into smaller pieces. What actually happens in such an environment, however, has not been explored in detail. Here, we study the impact of the metal enrichment on the clouds, conducting hydrodynamical simulations to follow the cloud evolution in cases with different degree of the metal enrichment Z/Z⊙ = 10−6 to 10−3. Below Z/Z⊙ = 10−6, metallicity has no effect and supermassive stars form along with a small number of low-mass stars. With more metallicity Z/Z⊙≳5×10−6⁠, although the dust cooling indeed promotes fragmentation of the cloud core and produces about a few thousand low-mass stars, the accreting flow preferentially feeds the gas to the central massive stars, which grows supermassive as in the primordial case. We term this formation mode as the super competitive accretion, where only the central few stars grow supermassive while a large number of other stars are competing for the gas reservoir. Once the metallicity exceeds 10−3 Z⊙ and metal-line cooling becomes operative, the central star cannot grow supermassive due to lowered accretion rate. Supermassive star formation by the super competitive accretion opens up a new window for seed BHs, which relaxes the condition on metallicity and enhances the seed BH abundance.