Numerous moderate to strong earthquakes shook southern Puerto Rico over the past 9 days, with the strongest earthquake in the sequence — M5.8 on January 6, 2020. The quake struck 13 km (8 miles) SSE of Indios. "I've spent 29 years with Puerto Rico's Seismic Network, and it's the first time I observe this kind of activity," director Víctor Huérfano told The Associated Press a couple of days ago. 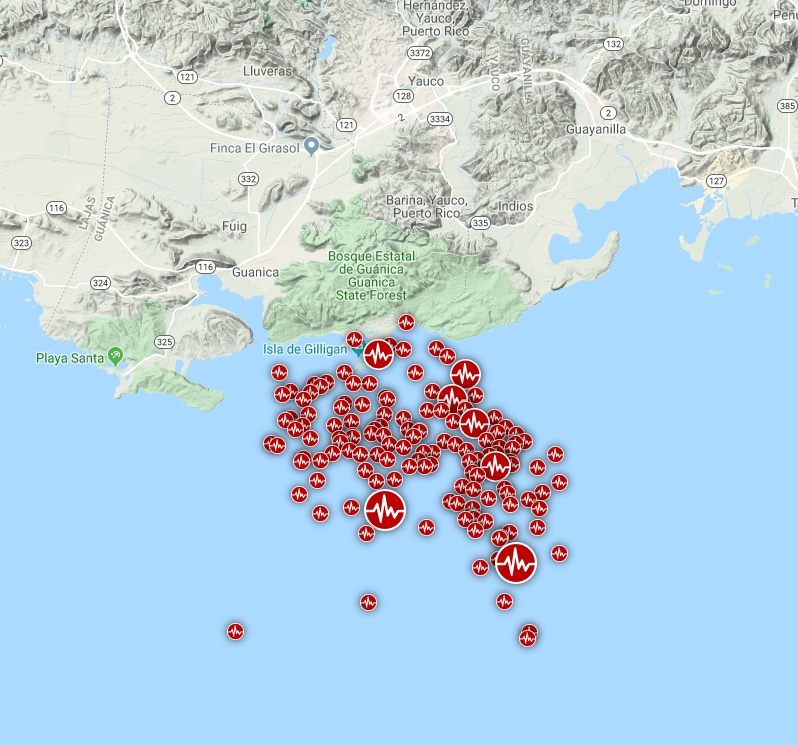 Overall, the population in this region resides in structures that are resistant to earthquake shaking, though vulnerable structures exist. The predominant vulnerable building types are mud wall and informal (metal, timber, GI etc.) construction. 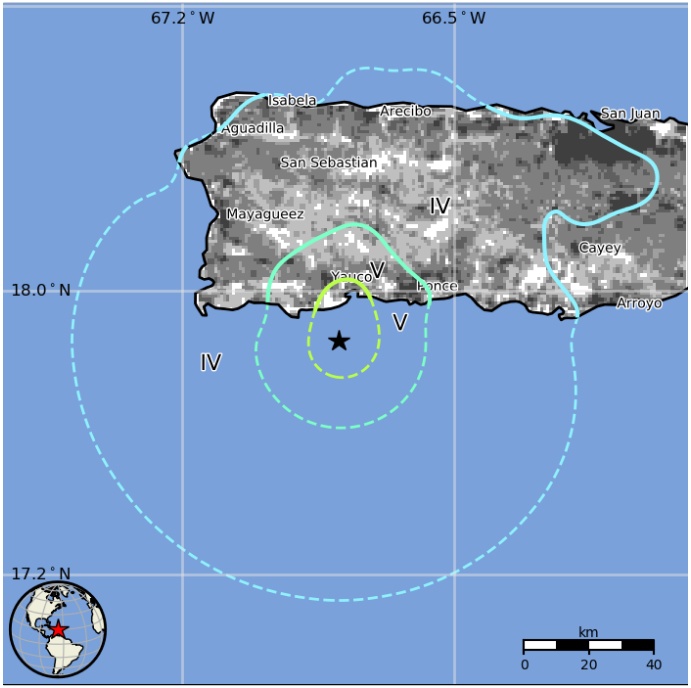 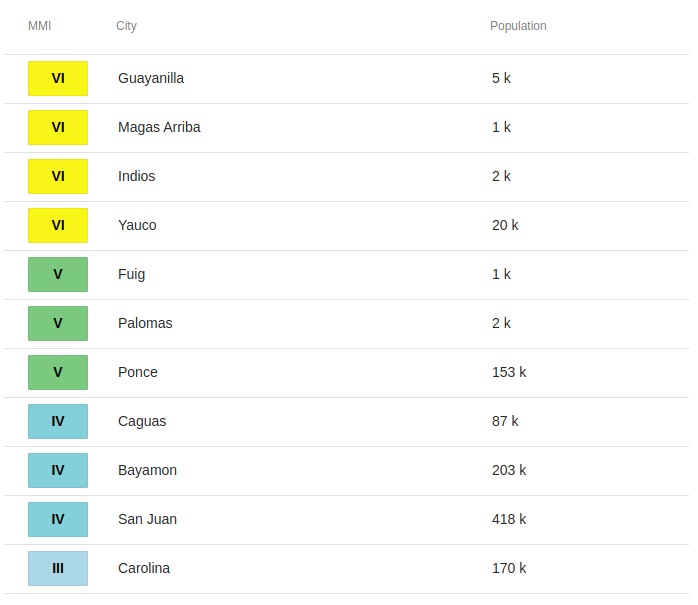 Power outages were reported in some parts of the territory on January 6. There are no reports of injuries but residents in southern coastal towns began posting images of partially collapsed homes.

Some roads were temporarily closed along the southern coast after small landslides hit the area.

AP quoted one of the residents saying her entire family woke up screaming. "I thought the house was going to crack in half," she said.

"We haven't stopped shaking," Vázquez said on January 2, 2020, after M4.5 earthquake hit the region. "It's the first time something like this happens."

"I've spent 29 years with Puerto Rico's Seismic Network, and it's the first time I observe this kind of activity," director Víctor Huérfano told The Associated Press. "There's no way to predict when it's going to end, or if it's going to lead to a major event."

He said the flurry of quakes have been extremely superficial and have occurred along three faults in Puerto Rico's southwest region: Lajas Valley, Montalva Point and the Guayanilla Canyon.

The map below shows all regional earthquakes detected since December 7. 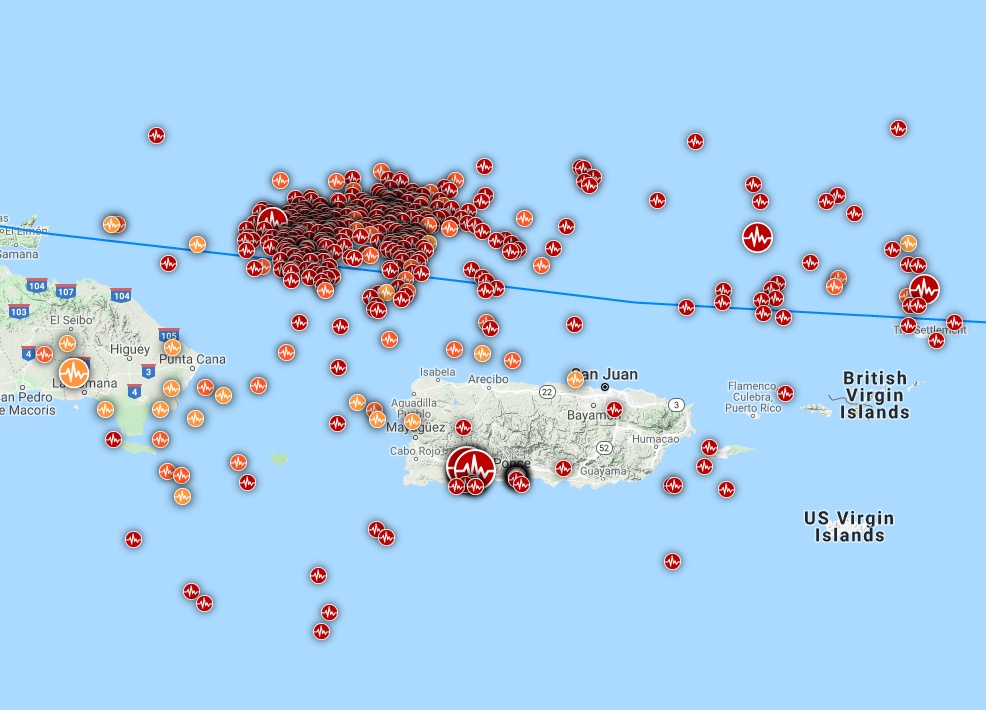 Motion is accommodated along several major transform faults that extend eastward from Isla de Roatan to Haiti, including the Swan Island Fault and the Oriente Fault. These faults represent the southern and northern boundaries of the Cayman Trench.

This results in the formation of the deep Puerto Rico Trench and a zone of intermediate focus earthquakes (70 – 300 km / 40 – 186 miles depth) within the subducted slab. 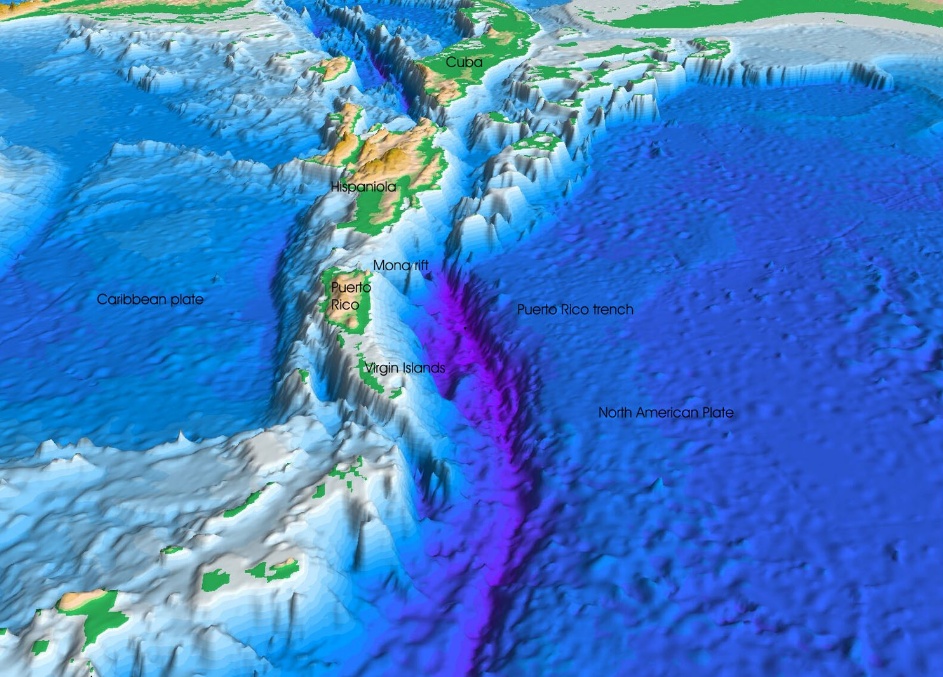 Although the Puerto Rico subduction zone is thought to be capable of generating a megathrust earthquake, there have been no such events in the past century. The last probable interplate (thrust fault) event here occurred on May 2, 1787, and was widely felt throughout the island with documented destruction across the entire northern coast, including Arecibo and San Juan.

Since 1900, the two largest earthquakes to occur in this region were the August 4, 1946 M8.0 Samana earthquake in northeastern Hispaniola and the July 29, 1943 M7.6 Mona Passage earthquake, both of which were shallow thrust fault earthquakes.

A significant portion of the motion between the North America plate and the Caribbean plate in this region is accommodated by a series of left-lateral strike-slip faults that bisect the island of Hispaniola, notably the Septentrional Fault in the north and the Enriquillo-Plantain Garden Fault in the south. Activity adjacent to the Enriquillo-Plantain Garden Fault system is best documented by the devastating January 12, 2010 M7.0 Haiti strike-slip earthquake, its associated aftershocks and a comparable earthquake in 1770.

Moving east and south, the plate boundary curves around Puerto Rico and the northern Lesser Antilles where the plate motion vector of the Caribbean plate relative to the North and South America plates is less oblique, resulting in active island-arc tectonics.